Is there an intelligence cut-off for working with some of these networks? You have to work hard to miss his point here.

Trump has a problem with MS13. And why wouldn’t he? They are not just your run-of-the-mill gang-bangers selling pot or boosting TVs. These guys have a particularly cruel violent streak.

They go out of their way to be cruel, and to cause suffering. Keep that thought in mind as we go to the video.

Here is the clip that leftists are losing (what’s left of) their minds over:

In April 2017, President Trump said that the administration was going after MS-13.

It doesn’t take much ‘sleuthing’ to see what he means with the reference to ‘animals’. He’s explained it before in his own freaking words.

Jerry Brown put his stupidity on display without hesitation and Andrea Mitchell was happy to spread the message. Another Trump responded to that moronic hot take. 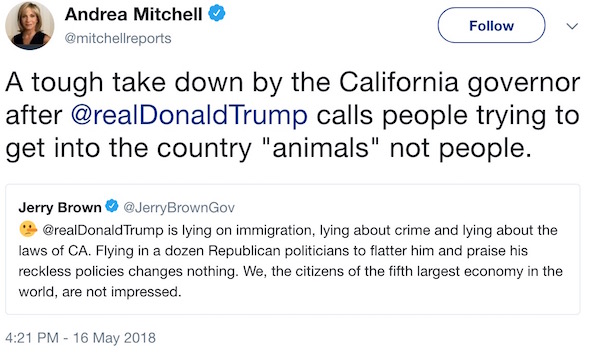 He was specifically talking about MS-13, and you know it. They are animals. I know you would rather side with them than Trump as you so often make clear but it’s a bad look for you Andrea. https://t.co/Mgoj1celNv

Here’s the Newspaper of Alleged Record, NYT test-driving a new term for lawbreaking illegal aliens while they lie about the President’s comments:

The NYT once again lives up to its gutter trash reporting by making a headline out of a statement taken out of context. NYT is garbage. https://t.co/CA6GNLaIbC

Even Piers Morgan is setting the American Press straight on this one.

Trump was responding to a specific question about MS-13, the most ruthless, violent gang in America. By cutting out the context this makes it look like he’s calling all illegal immigrants ‘animals’, which he wasn’t.
So it becomes deliberately misleading.. or ‘fake’.. news. ???? https://t.co/eECpEr9BHO

And he’s right to say so.

The Media(D) has forfeited any reasonable claim to journalistic integrity. Here’s a handy reminder of why we can say so:

FOR: MS-13
FOR: Hamas
FOR: Antifa
FOR: Sister of N Korea dictator

AGAINST: Nuns who don’t want to buy birth control

Reassess your priorities if you proclaim louder the humanity of MS-13 than that of Alfie Evans.

Have your own say:

Animals: what did Trump really mean when he said it?