A conservative student received a letter of reprimand for comments she made at an ‘Open Mic’ night on campus.

Campus Reform has reported that Nicole Miller, a student at the State University of New York (SUNY) Oswego, received a letter of reprimand from Alcohol and Other Drug Lifestyles Center Program Coordinator, Trisha DeWolf, for an ‘uncomfortable’ letter that Miller read at an Open Mic night.

This Thursday is the last Open Mic of the semester! We're here to make it great with the Luau event! Snack, games and…

Miller was calling out her ‘liberal’ classmates on their anti-conservative bias. The letter was about her own experiences at SUNY Oswego.

The letter that she read at the Open Mic night included the following:

I’ve been on this campus for almost 3 years now and let me tell you it’s been hard to show my beliefs here. I’ve heard horror stories from other conservatives on this campus about the brutal mental and emotional attacks on them. I’ve had them myself. It sickens me to death that the people that preach tolerance and acceptance of all people are so openly against us and our beliefs.

I’ve heard many stories from others like me who were attacked for their beliefs. People had their personal property destroyed, their own lives threatened, and administration has done nothing because [we’re] ‘Trump lovers.’

It sickens me to know that administration here cares so little about us being attacked for what we believe in but will praise any decisions the other side makes and send emails about that. The ‘tolerant left’ isn’t very tolerant when it comes to those their same age who have different beliefs.

The condescending email that Miller received proved the point she was making in her letter that she read at the Open Mic event.

“It was brought to my attention that students were uncomfortable with the letter that Nicole read during open mic last week,” the official wrote in the email. “While I am in support of your freedom of speech, I was implored to reach out you both by more than one student.”

“Anytime I receive a complaint I have to follow up,” she continued. “The unwritten policy has always been after one complaint, you receive a verbal warning and any complaint after than may result in being asked to not perform at open mic. I’ve already had to utilize this unwritten rule once this semester.”

Ms. DeWolf went further and said that she would now have to censor the Open Mic event.

In her email to Miller, DeWolf outlined two issues with the presentation, stressing that she does not “want students to think that your views are that of the Lifestyles Center.”

“I don’t want situations like this to negatively impact the LSC or Open Mic,” she added, saying the event “is suppose [sic] to be fun way celebrate the end of the semester.”

“A few of our students were deeply hurt by some of your remarks (their words, not mine),” DeWolf continued. “Moving forward, there will be written guidelines for performers, which I hate to have to do.” 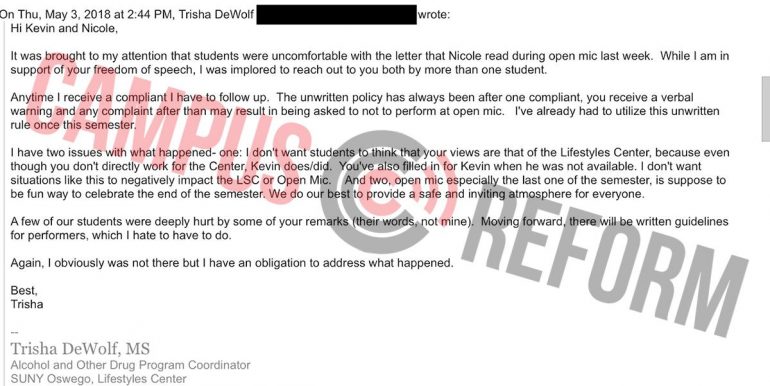 Miller sent a response to DeWolf.

She explains that the views were her own and she’s been bashed all year by other poets because her views differ from theirs. Miller said that she wanted to speak out and voice her opinion for once. She also says that she didn’t mean to hurt anyone, but an opportunity to stand up against ‘having liberal views screamed at her’ all year long.

“Looking back now, I’m glad I said something,” Miller said. “For far too long others could say their beliefs and no one spoke against them. Now I feel even prouder to be standing up for not only myself in this situation, but for those who agree with me but are scared to say something.”

SUNY Oswego College Republicans President Tyler Toomey also condemned the potential restrictions on free speech, but noted that he is “not surprised,” given that “many of our peers preach diversity and acceptance while they treat conservatives with contempt on a regular basis.”
Source: Campus Reform

They seriously don’t even see it.

They don’t realize that they want the right to bash the conservative worldview ad nauseum but if a conservative dares stand up to their bullying, they cry foul.

Or they literally cry and demand a ‘safe space’, a coloring book, and pet therapy.

Heaven forbid that they encounter any sort of ‘Resistance’ to their perfect worldview.

These wussified, soft-handed leftists couldn’t handle being a conservative.

That’s why conservatism has become the new counterculture and Christianity is the new Punk Rock. 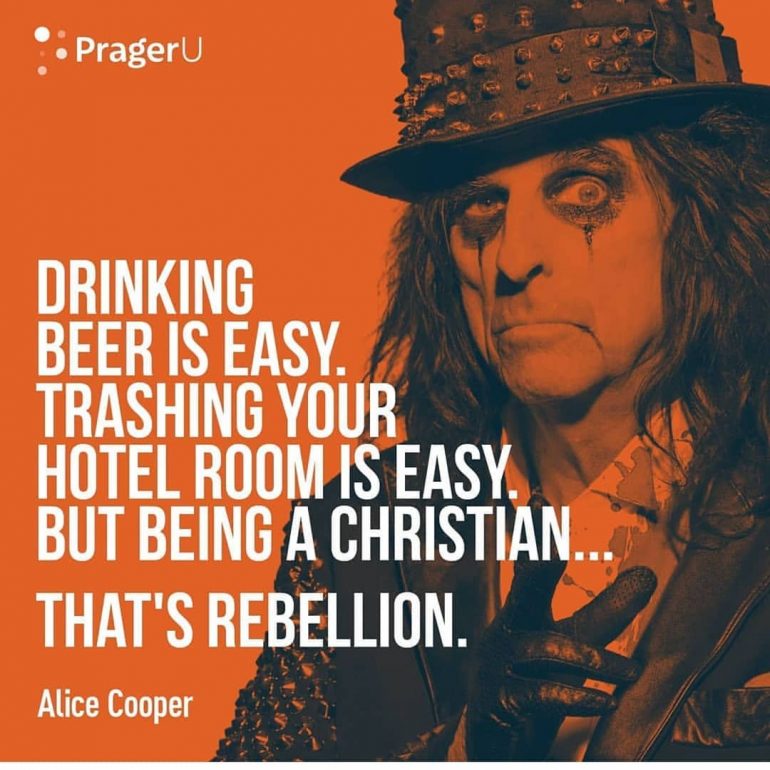