Can anyone possibly guess why Hillary hates Melania so much?

This couldn’t be ‘mean girl’ petty jealousy, could it?

Not only is she married to the guy who beat ‘impossible’ odds in the 2016 election, but she’s the First Lady. And Melania DOESN’T have to wear pantsuits.

In fact, on Inauguration Day — where Trump, not Hillary was sworn in as President — Melania was compared to Jackie O.

Was Hillary EVER compared to the FLOTUS of “Camelot”? Even back when she was still young?

So in her Blame America from Abroad tour, Hillary sat down with the Guardian to tell the world just how horrible America is, and how she’s going to rescue America from itself. How the woman who couldn’t even find her way to Wisconsin plans to do that is anybody’s guess. But she thinks she can. It was, after all, the interview in which she compared herself to Churchill before walking it back … a little.

She spoke about Melania. Not her visit to the kids itself:

Today's visit to #Texas to spend time with children & thank the many hardworking individuals helping to care for them was very meaningful. Thank you to @SecAzar @HHSGOV for traveling w me today & the care you are giving these children in such a difficult time. pic.twitter.com/P5orrJ4k6p

She spoke about the $39 jacket Melania wore into the plane, but not to the event itself.

And she’d have us believe she’s absolutely flummoxed by it.

The only questions I see floor her concern Melania Trump.

What did Clinton make, I ask, of her public statement about “hating” to see families separated? “I didn’t know what to make of it.” I ask how she interpreted the jacket the first lady wore to visit a child detention centre, bearing the opaque and intriguing slogan: ‘I really don’t care, do u?’ Clinton slumps back in her chair, wide eyed, arms spread, defeated by the mystery. “That, I have no idea. I have no idea. I can’t even … I don’t have any idea. I don’t know.” Does she feel sorry for the first lady? “I don’t know. I honestly don’t know.”

Thanks to whoever put this meme out there, because it sums up that interview perfectly! 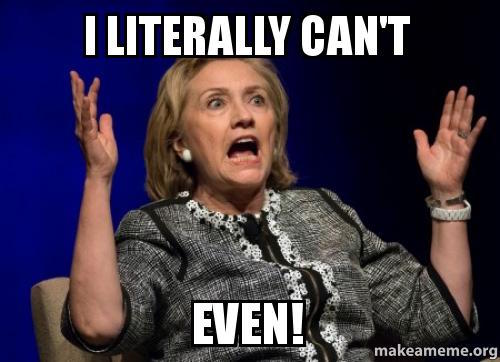 What is she, fifteen? And she wanted Americans to trust HER with the nuclear football?

Don’t worry, Hillary. We’re not trying to silence you. In fact, we WANT you to keep talking.

You’re a liability to your own team.