Former Pussycat Doll is coming under fire from the Left because of her tweet. Here’s the 411.

Kaya Jones, former Pussycat Doll, and a current outspoken conservative commentator, and a bold Christian, shared a photo that was initially posted by Michael Avenatti, the fame-hungry lawyer for Stormy Daniels.

Avenatti posted the heartbreaking photo of the teens at McAllen Miller International Airport on Wednesday.

‘Here is a pic I just took at the McAllen airport of seven young boys of detained parents being transported out of the area by handlers via AA flt 5772 to DFW,’ he wrote.

‘Who knows where they are going from there. Sending children 1000 miles away from their parents is a disgrace. #Outraged,’ Avenatti added.

Jones retweeted the photo with a caption. 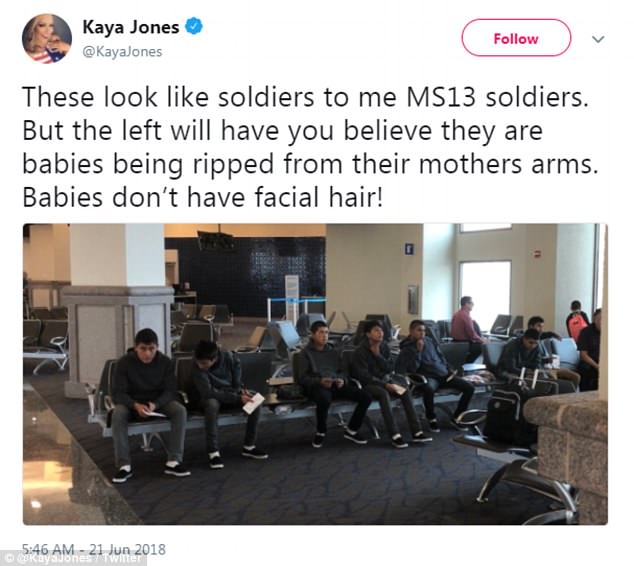 ‘These look like soldiers to me MS13 soldiers,’ Jones tweeted in the caption of a photo initially shared by Stormy Daniels’ lawyer, Michael Avenatti.

‘But the left will have you believe they are babies being ripped from their mothers arms. Babies don’t have facial hair!’ she added, though none of the boys have facial hair in the photo she shared.

And she’s being mocked for her Christian faith.

Didn’t Nancy Pelosi say that we weren’t supposed to call people ‘animals’ because it denies that ‘spark of divinity’?

Or does that not apply to conservatives? 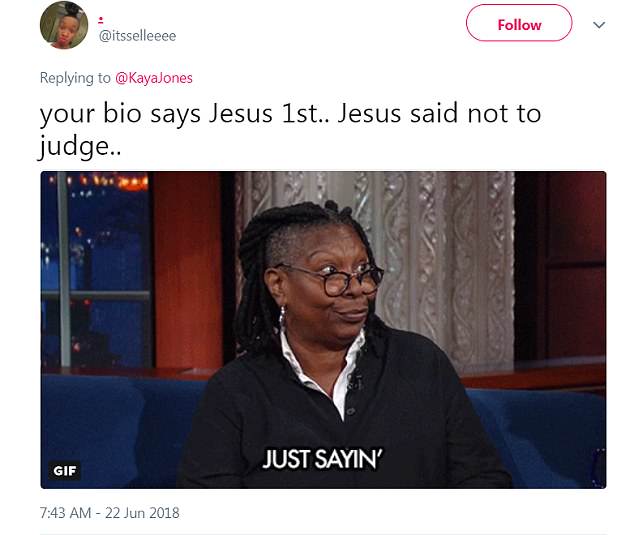 The awkward truth is that MS-13 is recruiting young people that cross the border illegally.

MS-13’s new push has been fueled by the recent influx of teenage immigrants like Danny, who traveled to the United States without guardians to escape poverty and gang violence only to fall back into it here, according to a Washington Post investigation that included reviews of dozens of court cases as well as interviews with local and federal law enforcement, attorneys, families and immigration experts.

Among the youths, mostly from Central America, are MS-13 members who join cliques here, and newcomers — looking for a way to fit in amid a new culture and language — who are quickly recruited by the gang. In recent years, more than 150,000 such teens and children have been detained at the border, screened and placed in communities through the federal Office of Refugee Resettlement (ORR). Many others are smuggled past immigration authorities…

…In the Washington region alone, at least 42 young people who crossed into the United States by themselves have been involved in MS-13 violence over the past three years, The Post found. That includes 19 charged in connection with slayings or attempted slayings and four who were killed.

These MS-13 gang members are trying desperately to snuff out that ‘spark of divinity’ in themselves and others.

MS-13 is the only street gang that federal authorities have labeled a transnational criminal organization. Its motto: Kill, rape, control.

MS-13 was founded in Los Angeles in the 1980s by Salvadoran immigrants but spread back to El Salvador, where its leadership is incarcerated, and to the East Coast beginning in the ­mid-1990s. Today, the gang has 900 to 1,100 members in the D.C. region and roughly 10,000 across 40 states, according to law enforcement estimates. In El Salvador, Honduras and Guatemala, there are 85,000 MS-13 and 18th Street gang members, according to a 2012 State Department estimate.

The gang gives many youths in Central America a grim choice: Join or die. Many young people risk the journey to the United States to escape.

And one that those ‘compassionate’ leftists refuse to acknowledge.

Is she right or is she being racist?

Let us know your thoughts in the comments.

“A gentleman from Nacogdoches, in Texas, informs us, that, whilst there, he dined in public with Col. Crockett, who had just arrived from Tennessee. The old bear-hunter, on being toasted, made a speech to the Texians, replete with his usual dry humor. He began nearly in this style: “I am told, gentlemen, that, when a stranger, like myself, arrives among you, the first inquiry is – what brought you here? To satisfy your curiosity at once to myself, I will tell you all about it. I was, for some years, a member of congress. In my last canvass, I told the people of my district, that, if they saw fit to re-elect me, I would serve them as faithfully as I had done; but, if not, they might go to h__, and I would go to Texas. I was beaten, gentlemen, and here I am.” The roar of applause was like a thunder-burst.[Louisville Journal.]