He’s a Republican Governor who married a JFK’s niece. That’s about as bipartisan as it gets.

He’s an immigrant, too. A legal one.

He has a few things to say to the obstructionists blocking solutions on the immigration issue suddenly tying the nation in knots. And they might be worth listening to. 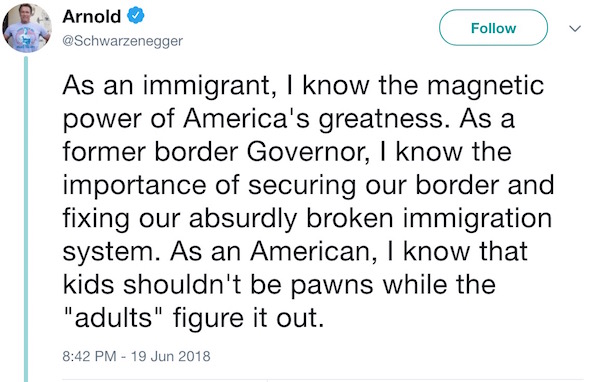 He’s got a high view of America that is largely absent in the Democrat party — at least, when we hear their people speaking candidly.

Secure borders are important. (Which used to be something even Schumer believed. Can you believe Schumer said all this?) 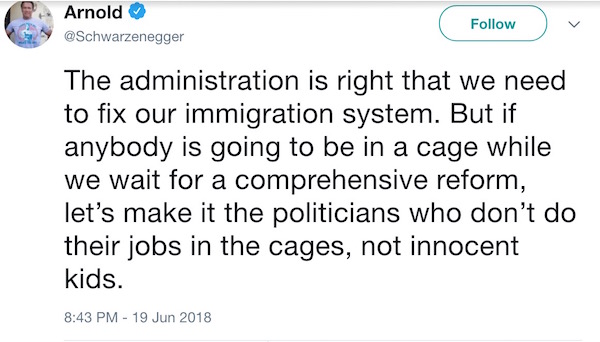 What could he possibly mean? Surely not this:

Political brinksmanship. Great, just what the situation calls for.

What did Left-leaning VOX say in a related issue, when it was a Democrat President?

So, President Trump and Vox can both agree that if a law is on the books, the options are between changing the laws around immigration enforcement or break the law by refusing to enforce it against known offenders.

Some of us learned in school that it is the role of Legislative Branch to propose laws (written as Bills), and the role of the Executive branch to sign them into law.

But Schumer — whose party routinely calls Trump a totalitarian threat to democracy — wants Trump to Cut Congress out of the bargain entirely, and change things with the stroke of a pen.

How easily Schumer became a cheerleader for decrees by Trumpian Monarchial Fiat (and why not? Obama had that pen and a phone!)

But Trump has the good sense to tell him ‘no’.

Who’s behaving like the REAL threat to democracy in this situation?

If Schumer stops opposing reasonable solutions to this staged crisis, it will go away.

And that needs to happen just like Trump said.

The real question is… does Schumer benefit politically for making sure it does NOT go away? We think so.

Would Schumer (and company) rather help kids or hurt Trump?

One is about compassion. The other is about power.

Which one do YOU think is motivating him?

Would Schumer rather help kids or hurt Trump?