Policing demands split-second life-and-death-decisions. Armchair quarterbacking is easy when you’re the one not being shot at. Here’s how it looks when you slow things down.

When five (six?) police show up for a call, it’s no ordinary police action.

In Chicago’s South Side, police were responding to reports of someone with a gun.

Despite five police standing around him, and another cop in another nearby vehicle, Harith “Snoop” Augustus was not cooperative with the policewoman who was restraining him.

He broke free of her grip, darted out to the street, and is claimed to have reached for his gun in the process.

Police wasted no time in neutralizing the threat.

We have the clip from two different angles. Here is the security footage from a street camera:

Here is the bodycam footage. If you play this footage on ‘slow’ you can see at the 22- or 23-second mark, the motion where Harith made a motion that was perceived as reaching for his gun.

In the end, it became a news story about a (white) cop killing an armed black man. The protests were as predictable as they were inevitable. But the fact that Harith was armed and constituted a threat is uncontested.

Here’s a still shot from the bodycam footage: 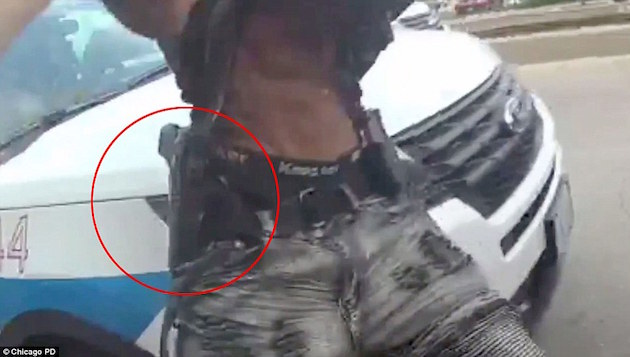 You can make your own judgment call whether the video confirms that he was reaching for his weapon when he got shot.