Michael Cohen and Trump have this in common: they both should have chosen their legal representation more carefully.

We all know why Trump picking Cohen was a bad idea. But not many know just how sketchy Michael Cohen’s lawyer is. His Clinton Connections are not even close to the worst of them. Naturally, the Clintons are themselves connected to the same ‘worst of them’, but let’s not get ahead of ourselves.

Lanny Davis has been everywhere lately using the national platform given by the Media (D) to drop hints about what Michael Cohen might know about so-called ‘Russain collusion’ with the Trump campaign team. Of course, he can’t say anything definitively because of attorney-client privilege, but he’s out there spinning the story to make his client look good. That is his job, after all.

Yes, that is indeed his job. To defend his clients and make them look good.

He did that for President Clinton when he was appointed as special counsel to his old Yale pal, Bill. He was known as the ‘media snake charmer’ and navigated the Clintons through multiple scandals (eg. selling access to the Lincoln bedroom for campaign contributions,) in the pre-Monica era. He came to then-First Lady Hillary’s defense when William Safire called her a ‘congenital liar’ in the New York Times when discussing the Whitewater scandal.

Here’s an excerpt from a 2013 WaPo article on Davis that called him a ‘spin doctor for hire’:

Since becoming Clinton’s media snake charmer in late 1996, Davis has been an irrepressible public gabber. He has been working the news media on behalf of clients for years, while also appearing incessantly on cable news and radio as a reliable liberal talking head, popping off about just about everything.

A Washington regulatory attorney and Montgomery County political operative until the Clinton gig raised his profile, he dropped much of his conventional law practice and reinvented himself as a consigliere to people and companies in “crisis,” meaning anyone taking a whupping in the media.

If you think that Lanny Davis isn’t still doing damage control for Bill and Hill, you’d be wrong. Here’s the book he released earlier this year: 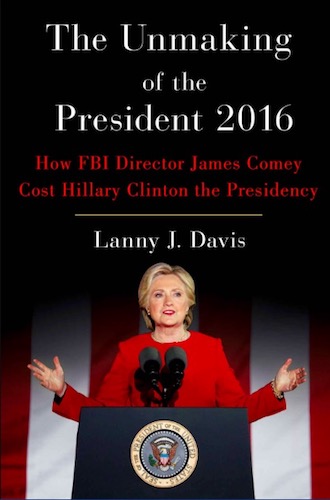 It looks like he’s pretty tight with the Clintons, wouldn’t you say?

Davis also worked for two African dictators. He says that people ‘distort’ what he did in Africa by saying that he advocated for a dictator and that he’ll ‘do anything for money.’ Davis says that those charges ‘violates all of the deepest sensibilities of who I am.‘

Davis has worked for Equatorial Guinea dictator Teodoro Obiang Nguema, the leader of the African nation since 1979. He wrote a speech for Obiang about human rights monitors that would be praised by Archbishop Desmond Tutu.

Davis was also linked to Ivory Coast strongman Laurent Gbagbo, who served as president from 2000 to 2011. When Gbagbo refused to give up his power after losing his reelection bid, Davis said in a statement, according to the Washington Post, “I urge the international community to avoid a rush to judgment until all the facts regarding the November 28 election are fairly evaluated — a position that offers the best chance to avoid bloodshed and to achieve peace and stability.”

Look at his strong commitment to the democratic process!

Hold on to your hats, there’s still more.

Lanny Davis isn’t just comfortable representing and cleaning up the media mess for the Clintons, African dictators, and a lawyer that recorded his private meetings with his client that was running to become president of the United States, he’s also a registered foreign agent working for a Pro-Russian Oligarch with ties to Vladimir Putin.

In an article in Forbes on February 18, 2017, titled, ‘No One Mentions That The Russian Trail Leads To Democratic Lobbyists,’ Paul Roderick Gregory untangles the mess and look who’s there — none other than Lanny Davis!

In the same article, Gregory mentions that there is little Media (D) scrutiny on the John and Tony Podesta’s connections to Sberbank, Uranium One, the Clinton Foundation, the Hillary-led State Department, and of course those Putin-connected players, Viktor Yanukovich and Dmitry Firtash.

If Tony Podesta’s name sounds familiar, that’s because Special Counsel Robert Mueller recently granted him immunity in order to have him testify against Paul Manafort.

It seems that the ‘Russian Collusion’ investigation is going on swimmingly with that move.

The media targeted former Trump campaign manager, Paul Manafort, for consulting for deposed Ukrainian president’s (Yanukovich’s) Party of the Regions. He also worked for billionaire oligarch, [Dmitry]  Firtash, who stands accused of skimming billions in the Ukraine gas trade in league with Russian oligarchs. The media also singled out Trump’s former national security advisor, General Michael Flynn, for attending a dinner with Putin and appearing on Russia’s foreign propaganda network RT. Trump’s own Russian ties were the subject of intense media coverage of an unverified opposition-research report purportedly prepared by an ex-British spy, who remains in hiding. It seems no enterprising reporter has tried to find him.

Let’s not leave out fugitive Ukrainian oligarch, Dymtro Firtash. He is represented by Democratic heavyweight lawyer, Lanny Davis, who accused Trump of “inviting Putin to commit espionage” (Trump’s quip: If Putin has Hillary’s emails, release them) but denies all wrongdoing by Hillary.

Why is it such a big deal that Lanny Davis works for Firtash?

It’s because Firtash is fighting extradition to the United States where he is wanted for bribery over a business deal in India. He’s also wanted in Spain for money laundering. Firtash currently lives in Austria and extradition orders have been issued by both the United States and Spain through the EU.

Firtash is a businessman that went from rags to riches with the aid of Kremlin resources to build his gas company which now provides gas to the Ukraine. In a 2014 profile by Reuters, Firtash is described as a representative of Russian interests in the Ukraine. The Kremlin assisted Firtash in building his business, including a line of credit to the tune of $11 billion.

He is Dmitry Firtash, a former fireman and soldier. In little more than a decade, the Ukrainian went from obscurity to wealth and renown, largely by buying gas from Russia and selling it in his home country. His success was built on remarkable sweetheart deals brokered by associates of Russian leader Vladimir Putin, at immense cost to Russian taxpayers, a Reuters investigation shows.

But that’s not all. Dmitry Firtash had connections to a European crime boss, Semion Mogilevich, who is wanted by the FBI for an alleged multi-million-dollar fraud in the 1990s. In 2009, Mogilevich was placed on the FBI’s Ten Most Wanted list, but was removed from the list in 2015.

The article includes the nuances of the deep connections that Firtash has with the Kremlin. Firtash is still fighting extradition orders.

The Ukrainian oligarch has said the allegations are “without foundation” and has accused Washington of acting for “purely political reasons.” He has hired an all-star legal defence team. It includes Lanny Davis, who helped President Bill Clinton weather a series of White House scandals in the 1990s.

In his time of trouble Firtash has not been deserted by the Russians. Since his arrest he has received another loan in order to pay his bail: $155 million from Vasily Anisimov, the billionaire who heads the Russian Judo Federation, the governing body in Russia of Putin’s beloved sport.

Sharyl Attkisson was the first to confirm that Lanny Davis is still registered as a Foreign Agent for Dmitry Firtash. She also explains what exactly a ‘Foreign Agent’ does.

She says that although it’s illegal for foreigners to give money directly to U.S. politicians and political parties, the legal way around it is by hiring ‘well-connected U.S. public relations firms, law firms, and lobbyists to act as their “foreign agents.”‘

What do these foreigners get for the money? The kind of access of which most Americans can only dream: Meetings are arranged with powerful, influential people in politics and media, at think tanks and universities. U.S. tax money gets directed their way. Laws are written in their favor. Arms deals are made. Trade policies are developed. Positive op-eds appear in American newspapers, and sympathetic articles are published in the press to sway public opinion. Rarely are we — as taxpayers and consumers of the information — told about the money that traded hands in the shadows. We’re left to believe it’s all just organic.

Our government says it’s all good as long as the U.S. foreign agents disclose their business ties to the Department of Justice as required under the Foreign Agents Registration Act (FARA). The idea is that as long as the relationships are made known, it’s not subterfuge. Problem is, few Americans read the disclosures or would even know where to find them, and have no idea about the extent to which foreign governments are secretly pulling strings in America every day.

Since Attkisson posted her article, others have been digging and she’s absolutely right.

Lanny Davis is co-founder and partner of the law firm of Davis Goldberg & Galper. I just checked FARA records. His firm is a registered *ACTIVE* foreign agent for Ukrainian oligarch Dmytro Firtash, who is a close ally of Russian pres Vladimir Putinhttps://t.co/PKHpeaCi7r

Just to make things a bit more interesting, it should be noted that Dmitry Firtash was added to the global anti-corruption Magnitsky List in 2017. That is the same Manitsky Act that Russian lawyer with connections to Fusion GPS, Natalia Veselnitskaya, was discussing with Don Jr. when he thought the Trump Tower meeting was to get opposition research on Hillary.

Dmitry Firtash, a Ukrainian oligarch indicted by a U.S. court in 2013 on bribery and other charges, is on the list. He denies wrongdoing and is fighting extradition from Austria.

Lanny Davis, an attorney for Firtash, in a statement said the allegations were false and that any sanctions “cannot be justified,” adding: “The constant repetition of false accusations on the Internet doesn’t make them true.”

This is the guy that Lanny Davis represents.

About that ‘Russian Collusion’…

Where’s Robert Mueller when you need him?

The writer for National Security and Foreign Policy at Conservative Review and CRTV tweeted, ‘TIL [Today I Learned] Lanny Davis’ primary stream of income comes from a Putin crony. Collusion?’

You know what they say..

‘A man is known by the Comrades he keeps.’