Is there still a right to refuse you if you’re a paid-up member?

You might be tempted to laugh this off as ‘first world problems’ but it does raise an issue. Should political battles should into civil society, or we should treat common areas as ‘neutral’ for the sake of the general public good?

That was part of the point Orrin Hatch tried to make when he wrote about a ‘Geneva Conventions for the Culture War’.

To be clear, I am not calling for an end to the culture war. Indeed, it can and must be fought. Intense disputes over social issues are a feature, not a flaw, of a functioning democracy.

I am, however, calling for a dramatic reassessment of tactics. We need a détente in partisan hostilities, an easing of tensions that can be realized when both sides adopt certain rules of engagement—norms to rein in the worst excesses of the culture wars.

Foremost among these norms should be a commitment to preventing communal spaces from becoming politicized. Even in our most divided times, there have been places we could go to escape the partisan clamor—places where we could leave politics at the door and come together as one, including restaurants, theaters, sports arenas and houses of worship.
Source: Senator Hatch

That is emphatically NOT the approach being taken by Siwanoy Country Club. Not if Melissa Francis is right in the claims she’s making.

A little about Siwanoy, before we continue:

Siwanoy Country Club is one of the finest private member-owned clubs in lower Westchester County. Established in 1901, Siwanoy has a storied history. To learn more about the Club’s history please click here Club History. The current location in Bronxville, New York has become the social and athletic center for many families in the area and is the closest private club north of New York City. The Club has evolved from a reputation as a men’s golf club to a modern family club. Today, the Club’s amenities include a stately clubhouse complete with dining rooms, expansive terraces for al fresco dining, private dining rooms for special occasions and club events, men’s and ladies locker rooms and lounges and two guest suites available for out of town guests.
Source: Siwanoy home page

What happens if a MEMBER in their club has the ‘wrong’ political opinions? Do they have any moral authority to refuse service to someone who has paid dues for the privilege of participating in a private club?

That’s exactly what may have happened with Melissa Francis. 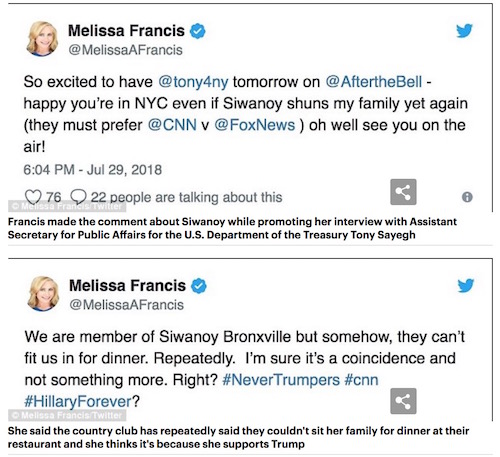 Depending on how long you’ve been walking the planet, you will either know her as a Fox News personality or as Cassandra Cooper Ingalls from Little House on the Prairie.

For some reason, she’s not able to get seated at the country club she belongs to… consistently.

Is it a coincidence? Or is Melissa being shut out for her politics?

Remember. This is an exclusive, Members-only club. She PAYS for the privilege to have access to that club.

Do they have a right to take her membership dues, but refuse her service? Is there not some sort of a contractual obligation on the part of the Club?

And all this over what… a difference of opinion over which party has the best vision for the country?

Maybe it’s because clubs of their vintage used to be able to exclude entire groups of people for reasons that are no longer socially acceptable. People like Blacks, Jews, and Women.

Maybe they need a new underclass to feel superior to, one that’s a little more politically correct.

Is this a tempest in a teapot, or is Siwanoy another elitist group trying to punish people for the ‘sin’ of independent political thought?

Is this a tempest in a teapot, or is Siwanoy another elitist group trying to punish people for the 'sin' of independent political thought?