Even the Swedish PM was yelling ‘what the f— are you doing’.

This is the same Swedish Minister that once shot back at Trump for saying Sweden has a problem with immigration.

The Swedish Prime Minister actually apologized after the fact, for deliberately low-balling their rape stats.

Sweden was very proud to show the world how accepting they were of the influx of ‘refugees’. (And do you notice everyone has taken to calling them Migrants, now?)

It was only AFTER the fact that Swedish officials discovered that a crap-ton [to use the technical term] of people were gaming the system, including claiming to be teens when they were actually grown men.

So, what have those ‘youth gangs’ …

(if in fact, they actually are ‘youths’)

BREAKING: Serious situation in Sweden. Youths torched around 14 cars near a shopping centre in Gothenburg pic.twitter.com/Ia9vbMnNV0

More than 100 cars have been set alight in across Sweden overnight, as gangs of masked youths went rampaging in a series of arson attacks believed to have been coordinated on social media.

Dozens of vehicles burned in Sweden’s four major cities – Stockholm, Malmo, Gothenburg and Uppsala – on Monday evening and in the early hours of Tuesday.

Swedish Prime Minister Stefan Löfven reacted with anger and did not hold back during a radio interview on Tuesday morning.

‘I’m furious, for real. My question to these people is ‘what the f*** are you doing?’,’ he told Sveriges Radio P1.
Source: DailyMail

You can try to overthink it. But don’t go looking for rational answers. 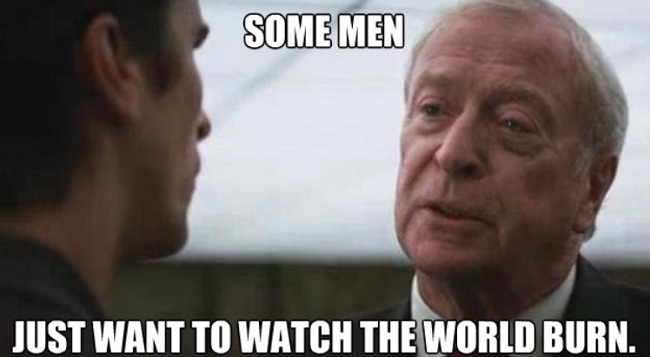 But the story takes a weird turn:

‘We have already started making calls to the parents of the youths who were taking part in this,’ Gothenburg police spokesperson Ulla Brehm told SVT.

‘We chose not to arrest anyone on the spot, but have identified them.’

Ms Brehm could not confirm that the series of identical car fires had been orchestrated via social media but said that ‘the fact that it has been co-ordinated in so many places indicate it’.

All culprits in the attacks have been described by witnesses as wearing dark clothing and hoods. Source: DailyMail

Chose not to arrest anyone on the spot?

What, you wanted them to fill a few more bottles with gasoline and firebomb a few more innocents? Maybe have a fire or two spread to an apartment building or a shopping center?

Or were authorities simply afraid to engage the mob directly?

If it was a couple of 10th generation Swedes, would there have been any hesitation?

Is there special treatment for this group? And if so… what do they know that we’re not being told?

Is it because it fits an all-too familiar pattern? Could this report contain any clues?

The youths fled the scene and are being sought. One witness explains: “This was organised. They wanted to make as much damage as possible. A car was blown, it was quite crazy. I was scared.”

Some of the witnesses posted photos and videos on Twitter of the burning cars. One witness shared a video on Snapchat: “I was on my way home and saw a boat and a trailer on fire and then I called police immediately.”

Police spokesman Ulla Brehm said, “At the moment we have no information about personal injuries and I do not know if any arrests have been made, but it can not be ruled out.”

Ulla Brehm also stated that witnesses have described ‘dark-haired youngsters’ as having started the fires before fleeing.
Source: Voice Of Europe

Dark hair huh? Why would that be a relevant detail in Sweden, do you think?