In case you were wondering why President Trump is said to be drafting an Executive Order about social media bias… here’s your reason.

Social media accounts that are explicitly advocating violence are given a pass. (And did we mention the were in support of leftist causes? Should it even matter? Clearly, it makes a difference.)

We’ve covered that before.

Google had their super-secret Get-out-the-vote effort to help Hillary and a cry-sesssion when she lost.

Twitter brass had no problem endorsing an article calling for a kind of ‘civil war’ that would FORCE the rest of America to follow the same political trajectory as California… whether they public liked the idea or not. (That sounds a lot more Authoritarian than Democratic, doesn’t it? Which is weird seeing how much effort they take to convince us that Trump is despotic.)

Meanwhile, Facebook has been getting into arguments with the companies they’ve hoovered up over trifling matters like lowering encryption standards which has led to high-profile resignations among the acquired companies.

That’s when they aren’t throttling Conservative sites, shadowbanning sites, saying the Anne Frank Holocaust Center violated their standards, and calling the Declaration of Independence ‘hate speech’ (they apologized for that, eventally).

These groups are all very busy stamping out the threats to their midterm election hopes. So busy, in fact, that they haven’t noticed a few other things in their midst — even when attention was called to it.

For example, thanks to a little pressure from their media rival and critic, CNN every single platform has blacklisted Alex Jones and his company, inforwars. The reason? He deals with fake news, but violent, racist, doxxing leftist activist groups?

Even James Woods — with his enormous Twitter presence, and entirely civil (but bitingly sarcastic) tone with his political rivals felt the blunt end of the Social media pool cue.

The problem is, these community standards violations are not uniformly acted upon.

Remember those supposedly ‘anti-racist’ white guys who started the protest that disrupted Ted Cruz and his wife while going out to dinner?

They tweeted some specific threats against elected officials… including the President.

Ironically Gavin, the conservative and politically incorrect comic (with a native-american wife) is often called racist.

More ironically than that, HE has been kicked off social media. The people who are harrassing him by passing out his personal phone number, while joking about white genocide, have not. 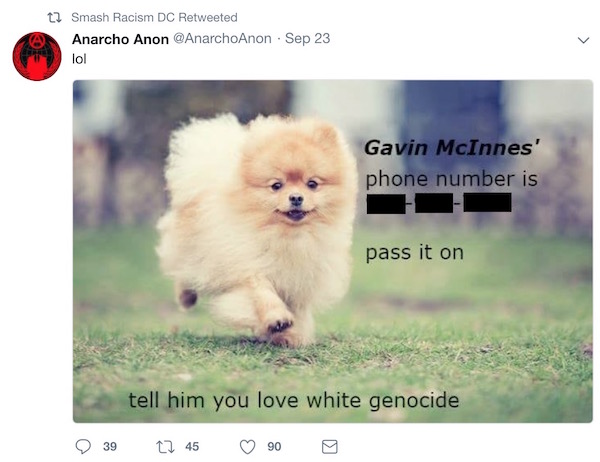 Does anyone ELSE see a problem with this picture?

Here’s a tweet they bravely removed from their original tweetstorm: 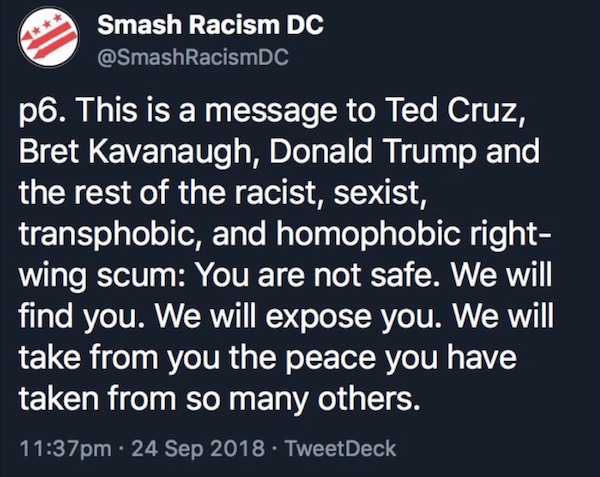 That must be why the were welcomed back after a day in ‘twitter jail’, rather than unplugged completely.

Were they contrite? Had they learned their lesson?