For someone who wants to get the truth out there about an alleged attempted rape by a Supreme Court nominee, the demands being made by Dr. Blasey Ford are just ridiculous.

This story is everywhere. It’s all anyone is talking about, and it’s such a YUGE story that even the Media (D) has bumped the alleged Hitleresque Hijinks of Trump to cover a SCOTUS nominee that might have a very dark past.

Dr. Blasey Ford and her #Resist lawyer, Debra Katz were negotiating ‘terms that are fair and which ensure her safety’ before she would agree to testify. Chair of the Senate Judiciary Committee, Sen. Chuck Grassley (R-IA) has contacted Dr. Blasey Ford through her attorney and set a deadline, as per Senate rules, for her to testify on Monday. Katz called it a form of ‘bullying’ and the list of demands was released.

Here is what she initially asked for:

As the negotiations with the Senate Judiciary Committee continue, one of the things that Dr. Blasey Ford’s attorney is seeking to control is the number and type of press coverage.

Michael Bromwich [another of Ford’s attorneys] said in emails sent Tuesday afternoon that he was requesting access for three “robocams,” three specific wire services, photographers from the Associated Press, Reuters and one unspecified service, and a pool reporter for newspapers and magazines. In a follow-up email he specified that the robocams should be operated by “the CSPAN TV pool,” and said he also wanted space for a radio reporter.

In addition, Dr. Blasey Ford’s attorneys would like to know the name of the outside counsel that will be questioning her on her allegation of attempted rape, and ‘an opportunity to meet with that individual.’ Debra Katz also claims in an email that Mike Davis, the chief counsel for nominations to Chairman Chuck Grassley, refuses to speak by phone, so they are also requesting an in-person meeting with him.

What, no bottles of chilled Evian water,  well-seasoned chicken wings, or the hearing room be set at 78 degrees?

I’d better be careful — there have already been calls to fire political cartoonist for making a similar comparison.

Hey, @indystar, Varvel has gone way too far. You should apologize to the women of this state and, at long last, terminate his employment. pic.twitter.com/uFwZUxb1zI

The editor of the IndyStar has apologized, and the cartoonist, Gary Varvel also clarified what his cartoon was actually depicting.

The cartoon did not meet our high standards. Our – and Varvel’s – intent was not to attack Dr. Ford. “My cartoon was focused only on Ford’s demands, not on whether she was telling the truth,” Varvel said. “This is a point I should have made clearer in my cartoon. As a husband and father of a daughter and granddaughters, I take sexual harassment very seriously.”

Here’s one that shows Kavanaugh attacking a woman while a drunk Mark Judge watches the door: 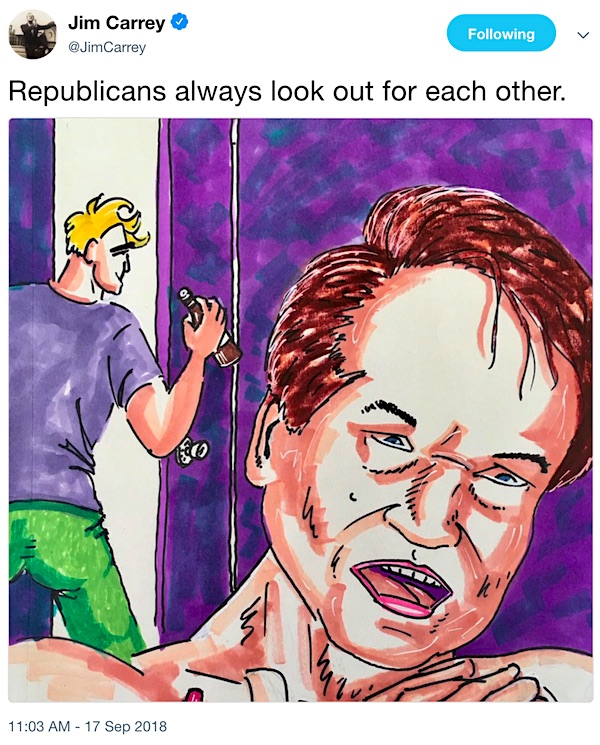 Or his depiction of Kavanaugh with a ski mask:

Colleges care more about donors than the victims of on-campus rape. That's why women don't report it and why ENTITLED LITTLE SHITS like Injustice Kavanaugh get to party and pillage their way to the Supreme Court.I'd like to suggest a new uniform for the highest court in the land. pic.twitter.com/9piWob4jGh

This is ridiculous — we have people demanding apologies from an editorial cartoonist lampooning a woman that is attempting to dictate terms to the Senate Judiciary Committee.

It has nothing to do with her testimony. I’m sure that Dr. Blasey Ford believes what she is saying is true, we just don’t know that it was Brett Kavanaugh that attacked her ‘beyond reasonable doubt’. She just doesn’t have proof, and in the United States, the burden of proof lies with the accuser, and the accused is innocent until proven guilty.

At least, that’s what it is for now.