She wants them to kill heir white MALE babies, specifically.

She’s ‘educated’, can you tell?

The obvious question would be… ‘doesn’t she seem kind of pale to be talking like this?’

It’s ok. Pay no attention to her pale skin, she’s found a way to be part of an aggrieved group. There’s actually a word for the Oppression Olympics where you can plot where you are in the ‘oppressed groups’ hierarchy.

Not surprisingly, this charmer referenced that word in one of her many tweets. We’ll come to that, but let’s begin with her murderous call to action.

In her bio, Kate Morgan tells us she is a “content producer, content strategist, editor, and writer”. Besides that, she’s a filmmaker.

She left out ‘racist’.

Too late. She did, and it has.

Even if she is trying to walk it back. 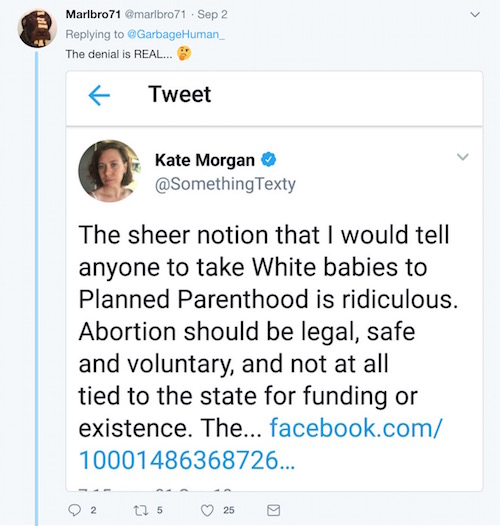 Her antipathy to men goes to her youth.

"Are you coming back to Chicago?""No.""Why not?""It is the epicenter of bunk Lutheran Theology and Catholic bullshit….

Eugenics, you say? Funny you should mention that … Planned Parenthood and eugenics have some historical overlap right here in America.

And I qoute from your twitter post: "If you're a white woman and are currently pregnant with a white baby boy… do us all a favor and take a trip to planned parenthood." You seem to know Masons so allow me to "enlighten you." #Murder #hypocrisy #racism pic.twitter.com/y2Dv6MkyAX

Sanger looked at black and oriental babies in exactly the same disposable way as Kate looks at white male ones.

So, eugenics is GOOD now? Will Kate be calling for forced sterilizations, next? Or is it still too soon for that?

Her various posts on marriage, spousal rape and the reference to a fantasy of sending her ring finger to an ex in a box (not to mention her reference to being ‘asexual’) point to a painfully badly failed marriage.

And heaven help anyone that enjoys some red meat.

(But she has no shortage of opinions to share with others.)

As to her racial background? Remember, she’s trying to play by the rules of Kyriarchy, where the more oppressed you are, the further removed you are from the dreaded position of white privilege.

She claims to be from two ‘oppressed groups’, and therefore ‘not white’.

Sadly this lady is deluding herself because Ashkanazi Jews and the Welsh are actually classed as white. Every race has done good and bad things it is pointless to hate a particular group because not every person in the group is the same!

Does she not see the irony of her classing entire swaths of other people by a classification system she herself rejects?

No. Because it’s all about power and politics.

Not a search for truth. The irony here is THIS is exactly the kind of nonsensical BS that eventually energizes reactionary backlash movements.

She and others like her COULD treat people as individuals. But they’d rather put them into boxes… and keep the conflict going.

But she’s ‘educated’ you see.