One school is bringing back corporal punishment to improve discipline. What do you think of that move?

Georgia School of Innovation and the Classics (GSIC), a K through 9 Charter school in Hephzibah, is bringing back the paddle. Corporal punishment is legal in Georgia as well as 19 other states, but it’s unusual for a school to actually have a formal policy in place.

The school sent out permission forms to parents outlining the new policy.

The school’s Superintendent, Jody Boulineau, told WRDW News that when corporal punishment was the norm in schools, the problems that we are now facing just weren’t there.

Boulineau says that the reaction from parents has been mixed, but some are thrilled that the discipline policy from the past has been adopted.

The school received about 100 forms returned with about a third consenting to the use of corporal punishment on their child.

Students of parents who did, however, will be given a three-strike policy – meaning the children will have two behavior warnings until they are paddled.

The punishment will be given by a school administrator in a closed room with an adult witness present.

‘At this school, we take discipline very seriously,’ GSIC Superintendent Jody Boulineau told a WRDW reporter who he explained the new policy to.

‘It’s just one more tool that we have in our disciplinary toolbox.’

The form includes the description of the ‘three strike’ policy and is clear on how the paddling itself will be administered. 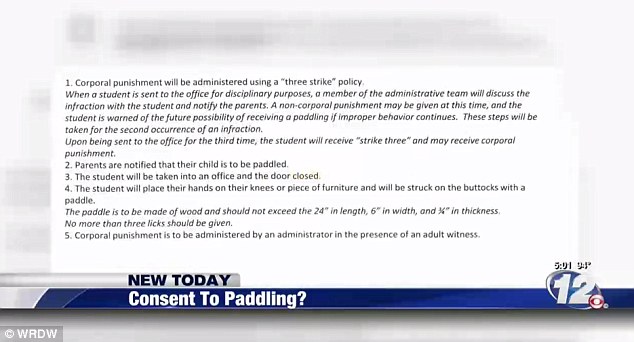 Boulineau says that there is no obligation for parents to consent to the use of corporal punishment, but if they don’t, they must consent to up to 5-days of suspension. He also doesn’t think that the new disciplinary measure will be used often because ‘sometimes the threat of paddling is a deterrent itself.‘

What Do You Think Of This School Bringing Back Paddling?