In case you somehow missed it, the woman that Nike claims is the ‘Greatest Athlete Ever’ had a really rough weekend at the U.S. Open.

Serena Williams was featured in the new ‘Just Do It‘ Kaepernick advertisement for Nike. She was used as an example to follow — she was just ‘a girl from Compton’ who became the ‘greatest athlete ever’ according to the ad.

The greatest athlete ever?

John McEnroe says that she wouldn’t make it to the top tier in men’s tennis, and he’s probably right.

Actually, other than the Nike advertisements, she’s been having a pretty rough time lately. She wasn’t allowed to wear a ‘Wakanda-inspired’ catsuit at the French Open. Some have suggested that was a racist move because the catsuit was form-fitting and showed the curves of her butt. The word ‘bootylicious’ even made it into the ESPN commentary about the catsuit.

Nike quickly capitalized on the controversy: 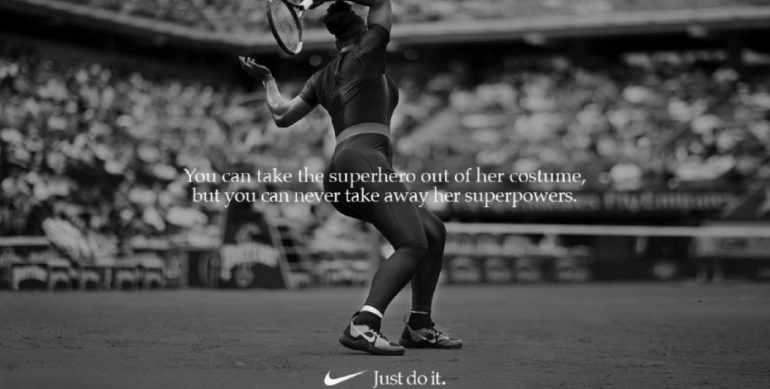 If not being permitted to unleash her inner Black Panther wasn’t enough hardship, she just lost the finals at the U.S. Open. Part of it was due to having a tantrum on the court.

In the finals, Williams faced off against Japan’s Naomi Osaka. The tone of the match suddenly shifted when Chair Umpire, Carlos Ramos, gave a coaching violation charge in the second set. Williams became emotional and enraged and argued with Ramos, insisting that she would rather lose than cheat. She demanded an apology from the Umpire. In frustration, she smashed her racket and was docked a point by Ramos.

Williams couldn’t let it go, and she called Ramos a thief for taking a point away from her. He then gave her another penalty. She insisted that Ramos apologize again.

After the match, ESPN interviewed her coach, Patrick Mouratoglou, who admitted that he was coaching but doesn’t think that Williams saw him.

‘I’m honest, I was coaching,’ Mouratoglou said after the game. ‘I don’t think she looked at me, so that’s why she didn’t even think I was.’

This is coaching. Can't do this. Be accountable for the actions of your box, @serenawilliams. Too bad the win by @Naomi_Osaka_ will be overshadowed by the incessant tantrum throwing. #USOpen2018 pic.twitter.com/skTcynaVE3

Williams was shocked by her coach’s admission.

‘We have never discussed signals,’ she said. ‘I don’t even call for on-court coaching. I’m trying to figure out why he would say that. I don’t understand. I mean, maybe he said “You can do it”.

‘I was on the far other end, so I’m not sure. I want to clarify myself what he’s talking about.’

Mouratoglou later said he was just doing what every other coach does and that the umpire’s reaction was ‘extreme’.

Mourtanglou says that Williams felt insulted by Ramos and that ‘He [Ramos] made her feel like a cheater. She felt completely humiliated. That’s why she reacted like that. Integrity is the most important thing to her.‘

Williams will be fined $17,000 for arguing with Ramos on Saturday.

She has been docked for three separate code violations: $4,000 for a coaching violation, $3,000 for smashing her racket, and $10,000 for ‘verbal abuse’ toward Ramos, according to TMZ.

The fines will come out of Serena’s $1.85million winnings from the tournament.

Williams claims that her treatment was due to sexism. She says that men have behaved badly on the court, but they haven’t been treated the way she was.

Williams simply couldn’t get over it for the entire match, and her game suffered because of it.

Her behavior and interaction with Ramos colored what should have been a great tennis moment for 20-year old Naomi Osaka.

Naomi Osaka has handled it with class. She won the U.S. Open. The young woman was ranked number 68 just won her first Grand Slam victory against her idol. It should have been a stellar moment for Osaka, but it will always be tainted with this Serena Williams-Carlos Ramos controversy.

So there’s been a lot going on but I just want to say, I was grateful to have the opportunity to play on that stage yesterday. Thank you ❤️ pic.twitter.com/utiEKJF8NN

Who would you rather your daughter look up to?

Which Tennis Player Is A Better Role Model?