Alright, for context, let’s start with the clip of Nike’s actual ad.

Believe in something. Even if it means sacrificing everything. #JustDoIt pic.twitter.com/x5TnU7Z51i

Honestly, if it weren’t narrated by someone who has gone out of his way to make himself odious to half the nation this really wouldn’t be a horrible ad.

It centers around people overcoming personal obstacles to rise to individual greatness. We’re all over stories like that. Especially here at ClashDaily and our buddies over at Warriors and Wildmen. After all, we recently ran a piece cheering the courage of a kid who took off his prosthetic legs before beating the hell out of a bully.

We might have found that 30-year anniversary of their ‘Just Do It’ campaign inspiring if only they hadn’t tied it to the guy who can’t even let America celebrate Thanksgiving without telling us how much he thinks we all suck. 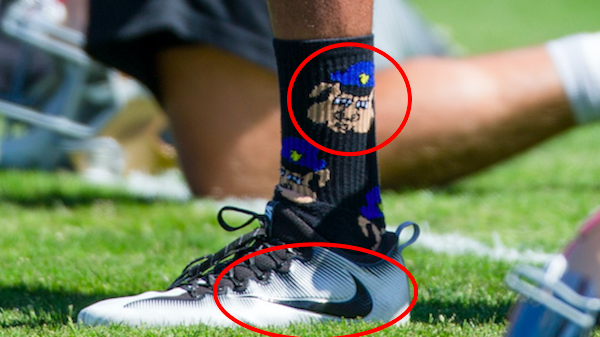 Oh, look. He’s even wearing his Nikes in that shot.

That will be great for their branding. But it needs a more accurate hashtag. How about #JustDoucheIt ?

Maybe Nike never figured out one basic principle: if a waiter spits in your drink, it doesn’t matter how fancy that drink was, the customer won’t drink it.

Many patriotic Americans are reacting to the Colin Kaepernick ad campaign in the same way. It doesn’t matter how ‘inspiring’ an ad is if HE is the one picked to narrate it.

And for all his endless posturing, it’s hard to take “Mr. Social Justice” seriously even in his new profession as an Activist, considering who’s check he is now cashing:

Just so I'm clear: These factory workers (which are 80% female) are making NIKE's for 20 cents an hour and working 70 to 80 hours a week, so NIKE can profit enough to pay Colin Kaepernick millions to speak out against oppression and injustice? pic.twitter.com/8NqVVxrl9G

But unlike what we’re seeing on the perpetual outrage machine on the Left, not everyone gets viscious when they’ve been insulted. Some of us answer back with humor.

For example, with a funny alternate version of the same ad:

(This one is best enjoyed with a double-shot of Covfefe.)

There really is something satisfying about hearing Colin Kaepernick’s voice backing up a solidly MAGA message. (Can you imagine his reaction? He must be seething.)

And wait until that moment when it shows Colin Turning his back on the image of the flag [what WAS Nike thinking by including that shot, anyway?].

We haven’t had this much fun with the MAGA message since CNN got their panties in a wad over being mocked on social media. They tried to Dox the wrong guy from Reddit over the wrestling meme, and got hit back with a ‘meme war‘.

Oh… and let’s take a quick look in on how well that PR campaign is going so far:

Nike’s Favorability Drops by Double Digits: Before the announcement, Nike had a net +69 favorable impression among consumers, it has now declined 34 points to +35 favorable.
No Boost Among Key Demos: Among younger generations, Nike users, African Americans, and other key demographics, Nike’s favorability declined rather than improved.
Purchasing Consideration Also Down: Before the announcement, 49 percent of Americans said they were absolutely certain or very likely to buy Nike products. That figure is down to 39 percent now.
The Effect on the NFL Seems Small, For Now: Forty percent of consumers said Nike’s campaign does not make them more or less likely to watch/attend NFL games — 21 percent said more likely and 26 percent said less likely (14 percent didn’t know).
Source: Morning Consult

Oops. Did he fumble this one, too?