Did you notice how Woodward is presenting this as though it’s some sort of a scandal?

The press is breathlessly combing Woodward’s book for their latest reason to hammer Trump. This time it’s our relationship with NATO.

And just for a little context to remind us how they reacted to a Woodward book critical of their beloved PREVIOUS occupant of the White House, here is an excerpt.

If that brief summary makes Obama’s Wars sound coherent or even interesting, I apologise. Woodward’s style is to leave his readers to their own devices, wandering through the corridors of power and eavesdropping on a few muttered conversations, often without context and certainly without analysis. No detail is too trivial to be recounted. A conversation never happens at the CIA headquarters but on the seventh floor of the CIA headquarters. US officials don’t fly around Afghanistan, they travel on “fixed-wing aircraft”. National security adviser Jim Jones doesn’t just take notes, he writes them into a “black Moleskine-style notebook”.
Source: Guardian

But now that there’s a Republican in office, Woodward is once again the greatest thing since sliced (gluten-free) bread.

And here is his big ‘scoop’.

The man who ran on the platform of ‘Put America First’ and who announced that was tired of other nations taking advantage of America’s wealth and strength, without offering fair compensation — are you sitting down for this? — actually wanted other nations to step up and pull their financial weight in our formal alliances.

But here it is anyway:

Trump and his advisors then debated the pros and cons of Nato membership, with the President arguing: ‘If you didn’t have Nato you would have to invent it. There’s no way Russia could win a war if they took on Nato.’

But retired general Keith Kellogg, the National Security Council chief of staff, argued Nato was ‘obsolete’ and the US was being ‘used’ by allies.

Jared Kushner, Trump’s son-in-law also had his say, arguing that the US was losing ‘pennies on the dollar’ in supporting the alliance.

Mattis argued sternly in favor of membership and said he was confident Germany would meet its target of spending two per cent of GDP on defense.

Eventually Trump capitulated, according to the book, telling Mattis that the US would support Nato but its allies must pay.
Source: DailyMail

Why does all this matter?

Because even a CNN piece from the summer of 2016 complained that other nations are not pulling their financial weight in supporting NATO. And Business Insider in Feb 2017 said that only 5 of 28 countries are paying the agreed-on amounts for defense.

That was the year Obama was criticizing NATO’s ‘free riders’. But like so much of his Presidency, he complained about it but didn’t do anything to remedy it.

Either NATO is “critical for our mutual defense”, or it isn’t.

If it’s not a financial priority for those nations who live directly under the shadow of a Russian threat, the question is, why should America be expected to carry the load?

Here are a couple of relevant charts: 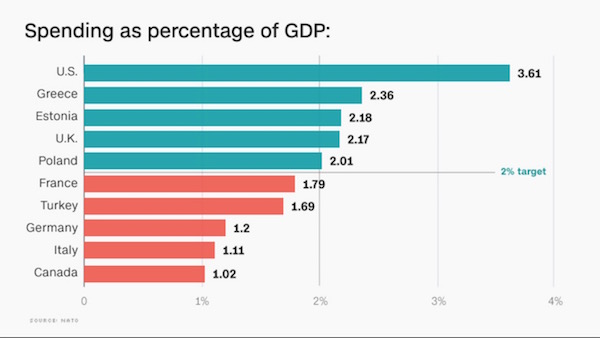 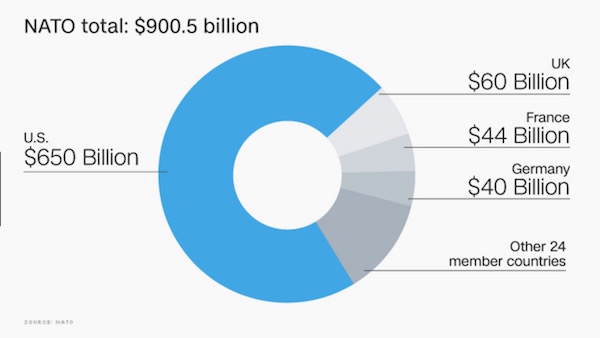 These European nations with their over-the-top social spending are more than happy to let us pay for their defense. It lets them burn money on the latest political virtue-signaling projects.

But Trump said the gravy train is over. For too long, European nations have been like adult children living in America’s basement.

It’s this kind of a hard line that was the only way they were ever going to wake up and start behaving like adults. It’s time to start ponying up for their own defense.

Previous Presidents COMPLAINED that NATO took us for granted.

Trump actually DID something about it.

Are you glad Trump's taking a stand on NATO freeloading?