Avenatti sure talks a big game, but can he back it up?

There’s an expression about the empty truck making the most noise.

His fifteen minutes of fame are in grave danger of being ‘up’ now.

First, there was the ‘Stormy’ case he brought forward that didn’t really go anywhere.

Then the Left turned on him for bringing that ‘third accuser’ into the national stage. A significant part of the left thinks it was his client’s flimsy accusation that caused public opinion to shift and conclude that there was nothing more than an orchestrated Leftist ‘hit’ being organized against Kavanaugh.

So he’s in the political doghouse.

That doesn’t fit with his obvious 2020 ambitions. How do you get OUT of a liberal doghouse? Easy. Launch another attack against Trump.

How is he going to do that? After all, he doesn’t have any more accusers lined up against Trump.

He needs a publicity stunt that will paint him as a hero. The easiest way to do that is to use Trump as the villain. But what?

The President is off limits, obviously — besides, there’s nothing ‘heroic’ about hitting a senior citizen.

But maybe he could do it by proxy… with Donald Trump Junior! 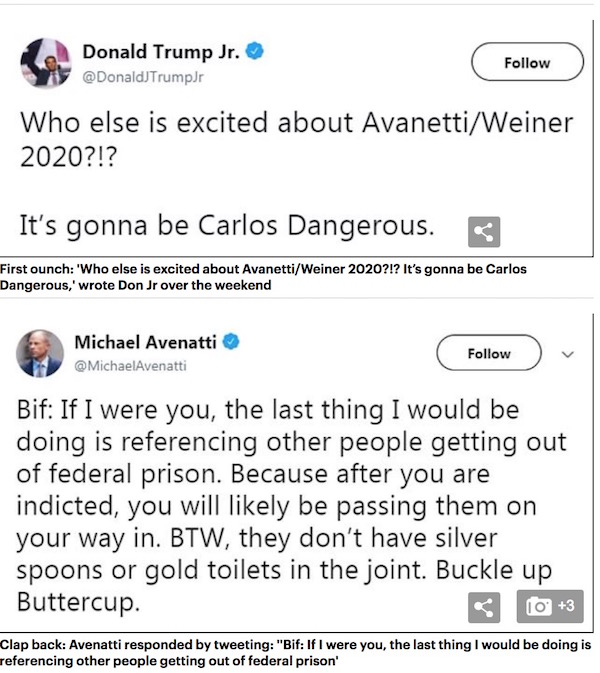 Somehow, that exchange led to talk of a three-round MMA charity match.

We’re not even kidding. Oh the lengths Avenatti will go to for those ‘fifteen minutes’ he craves.

I hate these things but, if a solid charity benefits from it, I’m totally down to scrap here. I even unblocked Avenatti in case he responds. Let’s do this Mike. Just say when. Thx.
-DB https://t.co/MdjfTGt9by

Could this get any more surreal?

Of course it could:

Whether ever they meet in the ring or not, we can tell you one thing — Avenatti is entirely outclassed by each and every member of the Trump family.

But he’s especially outclassed by the President and his lovely wife.