Does their response to this scam really surprise anyone?

Some enterprising young con thought it would be awesome to come up with some sob story about how her Democrat parents were mean to her, she was down on her luck and would like a little help from the good people of MAGA-land.

Not surprisingly, the good people who wear those ‘evil’ red hats stepped up and put their money where their mouth is.

She made it look like she was on the Trump Train…

I will not hide any longer,, the left has made us feel as if us black republicans should hide!! but not anymore!! #BlacksForTrump #WalkAway #maga pic.twitter.com/YA0hnarxaY

And she put an appeal to her GoFundMe page.

my first platinum tweet. stream baby by @MarinaDiamandis and @LupeFiasco out November 2nd ???

Then she was exposed as a fraud:

the scam of the century pic.twitter.com/u7ohL3SejB

She made herself a tidy sum.

It sounds so much more civilized than saying, for instance, ‘Jews’ aren’t people, right?

I don’t know if these texts were originally real or not, but they were definitely not from her mum / to her pic.twitter.com/CcVoj8TOLJ

How clever and original she is.

Trump is a racist, homophobic, transphobic, bigot AND YOU THINK MY BLACK ASS WOULD SUPPORT THAT ROTTING CARROT?? ridiculous. any black person can put on that ugly ass hat and say #MAGA and yall will instantly be up their ass cuz you wanna prove so hard you’re not racist

Here she is bragging about her haul. And other liberals, not surprisingly, were basking in the schadenfreude of the people she conned.

girl i can afford my tuition, rent, and 17 iphones now ?? https://t.co/sZ6xvofnoP 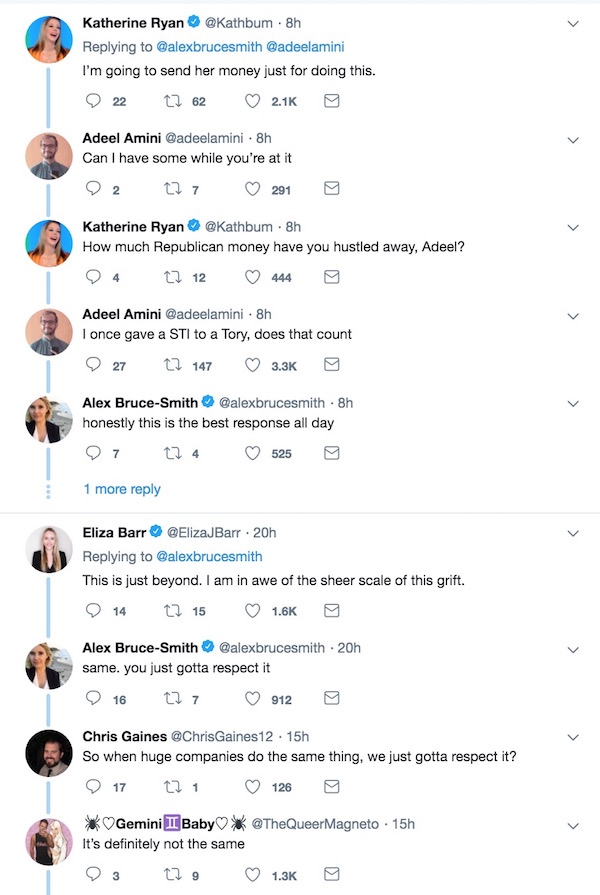 A couple of things.

First off she’s too dumb to even realize that this little scam hers just COMPLETELY disproved EVERYTHING she claimed about Trump and Team MAGA.

Conservatives are either hateful, miserable black-hating misogynistic bigots or they are not.

If they are, then not a single person would have given a tinker’s damn about her supposed situation at home or whether she dropped out of school.

It is BECAUSE of the generosity and goodness of decent Americans on the Right that this scam even had any chance of working in the first place; SPECIFICALLY because of that reason. If we hated women and blacks, she couldn’t have conned us for a plug nickel.

She probably gave no thought to studies that show the curious fact of people most willing to be charitable often being the ones who have the least to give.

Did some poor shmuck go without a meal so that little Ms Thang could flex her ill-gotten wealth on social media? Most likely.

And yet, her account shows she conned her way into a tidy sum of at least $150K before her lie was revealed.

This says far more about the wickedness of the Con Woman that it does about the supposed ‘monsters’ on the right, don’t you think? But she’s probably too drunk on her own hatred to even see that irony.

Second, Caveat Emptor — be skeptical with GoFundme projects. Not everyone on the internet is who they seem to be. Not every sob story is real. Even real causes and real people have fakers trying to make bank off of somebody else’s misfortune or project.

Next? This woman might want to think twice about spending that money. I’m no legal expert, but she might need some of it for lawyer’s fees should someone indict her for committing fraud, or decide to make an internet example of her malice and take her to court over it.

And if she winds up having to return the money? She’s going to wish she hadn’t spent it. Because if she’s lavished her ill-gotten gains on her ‘friends’ … you can be sure THEY won’t be giving her back a damn cent.

Why would they? They’re just as selfish as she is, you can tell by their cheering.

Why shouldn’t those ‘friendships’ be treated a means to an end just like the poor suckers who gave her the money in the first place?

Even when the Left thinks they’re scoring a hit against us, they’re only showing the world how rotten they really are.