Think they’ll ever figure out where they went wrong? If so, will they be ever be able to fix it?

Kaepernick is laughing himself all the way to the bank with his ridiculous Nike campaign.

If the Stock price is any measurement of it, their decision hasn’t helped Nike any: 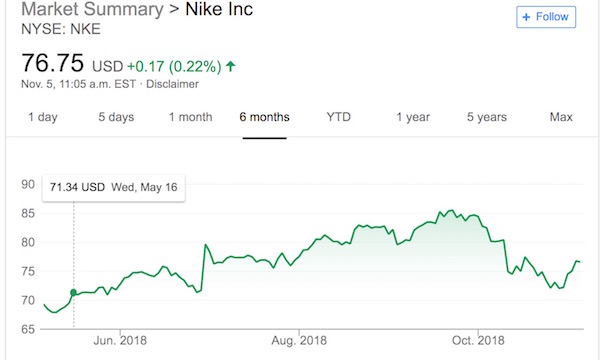 Keep in mind, the ad came out in September. If anything, stock price is lower now than it was.

His impact on the NFL was much more significant than just a drop in stock price.

He’s managed to poison the brand itself.

How did Week Nine look? The headline calling it ‘Weak Nine’ might be a clue.

Skins record was what, 5-2? 1/3rd of their seats were empty during the whole game. As you can see how many we swiped ?. During the 7ish minute mark half the stadium was gone ?

Umm, lots of empty seats at FedEx for a 5-2 team. Daniel Snyder has destroyed this fan base.

It wasn’t the only team seeing empty seats, either.

Losing is one way to get fired but fan apathy and empty seats is a guaranteed way to get fired. Jets not building on anything. They have a QB worth saving with professional coaching. It’s TIME! @woodyjohnson4

Maybe politicizing your product was not exactly the greatest business model, hey guys?

Not sure that you’ll be able to unscramble these scrambled eggs. You’ve kissed the wrong asses in this scenario.

Let the players find some way to fill the stadiums. Because the fans you’ve insulted sure as hell won’t.

Never underestimate the significance of those people you so easily dismiss as ‘flyover country’. They tend to vote with their feet and have a LONG memory when someone insults them.

Why else do you think Trump suprised all the experts in 2016? The same reason he’s well-positioned to do it again in the midterms.

It’s because ‘Flyover Country’ has far more power than the New York, D.C. and the Left Coast give them credit for.