Not only is Trump reversing the ‘catch-and-release’ approach of the past, but he will aggressively defend the border, too.

When the so-called ‘caravan’ (or Migrant herd) tore down border fences and clashed with law enforcement, Trump was paying attention.

He saw the Mexican soldiers get injured in clashes with the second migrant herd on Sunday. (Notice how the map shows there are now FOUR such ‘spontaneous caravans’.) 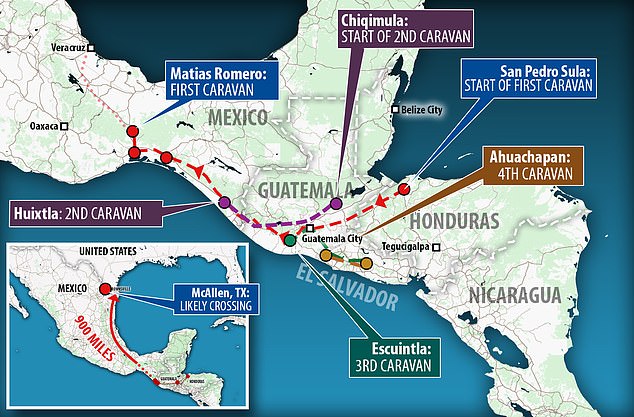 If they think they can use their numbers to swarm and bully their way into forcing America into letting them enter, they are seriously underestimating the will of those defending the border.

Here’s the shorter clip with the key quote about how those defending the border will treat acts of hostility:

Notice there is nothing in that statement about instigating the use of force. But dangerous projectiles like the ones border-crashers have already thrown will be taken seriously.

Importantly (and let’s see whether the press is honest about this detail) any reference to shooting came IN RESPONSE TO a question about the possibility of American use of force.

Trump has already ordered thousands of troops to the southern border, and was asked after delivering a fiery speech at the White House whether he envisioned them firing on the people making there way approaching the border on foot.

‘I hope not. I hope not. It’s the military. I hope there won’t be that. But I will tell you this: Anybody throwing stones, rocks, like they did to Mexico and the Mexican military, Mexican police – where they badly hurt police and soldiers of Mexico – we will consider that a firearm,’ Trump warned.
Source: DailyMail

If you want the full context, you can find it here.

The President had this to say about it:

Look at his statement carefully and compare it to where the press is already going with it.

What this same media will NOT focus on is a quickly-constructed camp of sorts where these people can be properly housed until any asylum claims can be sorted out.

Do they still wonder why we call them ‘fake news’?