A clownish VP in a government that was hellbent on ‘fundamentally transforming’ America is lecturing Americans on ‘who we are’ … From Munich. It’s Obama’s apology tour all over again.

Here he is standing up in Munich waxing poetic on ‘moral authority’ to lead abroad.

Moral authority, eh? Didn’t you all stand back and watch the world burn while cheering on the ‘Arab Spring’? Didn’t ISIS swallow up a helluva lot of land mass while your ‘steady’ hand was on the tiller? Didn’t Crimea get swallowed up by Russia on your watch?

Hell, didn’t our own sailors get captured by Iran under your watch, with ZERO consequences to Iran? In fact, you went so far as shipping pallets of cash their way and stopping Law Enforcement agencies from disrupting Hezbollah’s criminal activities internationally AND within American borders.

That was a story so big it took several pieces to cover the big ideas.

We’re supposed to just forget about all that?

But let’s all talk about ‘moral authority’ and ‘leadership’ from the guy whose boss gave us the phrase ‘leading from behind’.

Implying that President Trump does not respect countries traditionally allied with America, Biden continued, “I have spent the better part of the last two years traveling throughout the United States of America, from Minnesota to Texas; from Boston to Birmingham. I can assure you, that the American people, the ultimate wellspring of power in the United States of America, remain committed to engaging the world with decency and respect. Those same people who I met all across the United States, who may feel disconnected, discounted, ignored, or left behind … They still believe, as I do, that the core values enshrined in our alliances are worth defending.”
Source: DailyWire

This sounds an awful lot like his predecessor’s lame Apology tour, don’t you think? Will Biden be practicing so that he can bow as low as that other guy, just in case he wins the Democrats’ nomination? 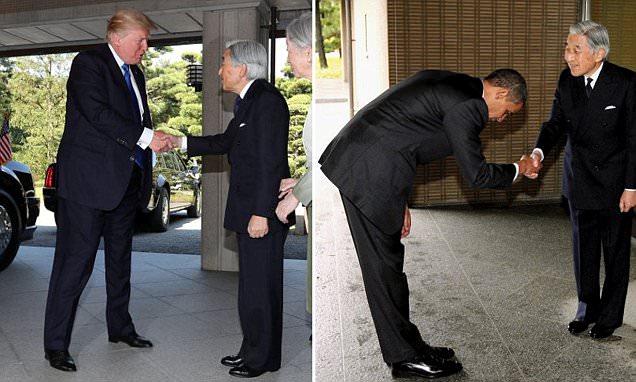 But should the guy who said about the sitting President ‘If we were in High school I’d take him behind the gym and beat the hell out of him” really be talking about how embarrassing the OTHER guy is?