You can relax, it’s not ‘hero worship’.

It all started out as an internet meme. ‘God-Emporer Trump’

There were so many variations on a theme, drawing from a combination of history and pop culture references…

Trending: MEME OF THE DAY: Trump’s Historic Address And Walk To Church Is Already A Bad@ss Meme 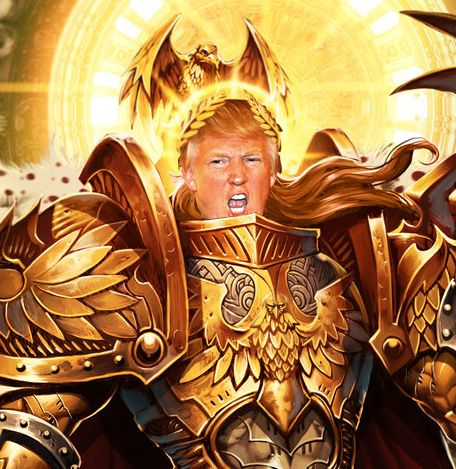 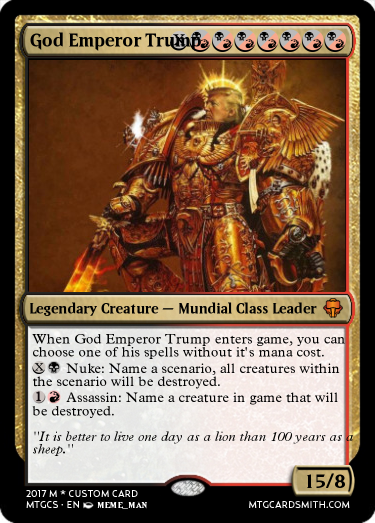 …that it was almost inevitable that it found its way into the real world… as a five-story-tall parade float. And yes, if you’re wondering, that IS the Twitter logo on the hilt of his enormous sword.

Giant float depicting Pres. Trump as an emperor watches over Italian city of Viareggio's annual carnival as thousands of people line the streets to watch the parade go by. https://t.co/xkZp8Cr7F5 pic.twitter.com/M3Yt1D14HV

We’ve gotta admit, that float IS pretty badass. But seriously, how could you possibly fit five stories of snowflake-melting MAGA into your living room?

Let the kids have their memes. We’ve got real-world artwork to choose from, four in fact.

Our Own Resident Artist Doug Giles has released the latest offering in his MAGA series.

We finally have a Republican leader who’s ready to fight when it’s a ‘hill worth dying on’. He did it for Kavanaugh, he’s doing it again.

Trump is rebelling against the establishment’s demands that he bow the knee to public pressure. He wants that wall.

What better way to capture that ‘try and stop me’ attitude, than with a bonafide American Icon. Like Trump, this painting pulls no punches.

If you want to celebrate the MAGA movement with a copy of this art for your wall, there are a variety of sizes and price points for you to choose from.

And he’s having a helluva time while he’s doing it. Energy, Optimism and a belief that America — and her people — really ARE great!

It’s what we should EXPECT of our leaders, isn’t it? Here’s a painting depicting EXACTLY why we WILL see “Four More Years”.

Trump came to tear the shackles limiting American innovation off so that the world could once again hear the Roar of true American Freedom.

A free people whose hearts and minds are truly unleashed to run down their unique dreams of Life, Liberty, and the pursuit of Happiness.

Violent Rioters Burned Home With Kids Inside, Then Blocked Fire Fighters From Getting In
June 1st, 2020 Flag And Cross