That’s quite the list. (Even ‘organic’ brands are affected.) Is YOUR brand on it?

Is this a case of ‘nothing to worry about’ or will this have you thinking about switching drinks?

A Glyphosate study on fifteen major brands of beer and five brands of wine turned up ‘trace amounts’ of the active ingredient in Roundup.

The study was done by an advocacy group — US PIRG — which tested positive for at least some level of Glyphosate for all but one of the brands tested.

No, it doesn’t mean we’re all going to look like that fish in the Simpsons anytime soon.

But it is still good to know a thing or two about what you’re drinking. 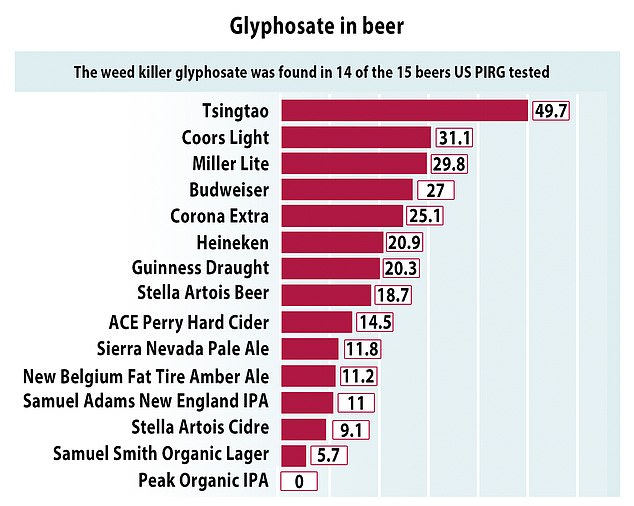 “The levels of glyphosate we found are not necessarily dangerous but are still concerning given the potential health risks,” U.S. PIRG said.

…The highest concentration of glyphosate was found in the 2018 Sutter Home merlot, which came in at 51.4 parts per billion, or ppb.

For beer, Tsingtao from Hong Kong had the most with 49.7ppb, and Coors Light had the most for American beers with 31.1ppb.

The study author, US PIRG Edication Fund’s Kara Cook-Schultz, said of the study: ‘No matter the efforts of brewers and vintners, we found that it is incredibly difficult to avoid the troubling reality that consumers will likely drink glyphosate at every happy hour and backyard barbecue around the country.’

A spokesperson for the Beer Institute, a national trade organization, responded to the report by telling USA: ‘Our members work with farmers who go to great lengths to raise their crops sustainably and safely….and the results of the most recent federal testing showed farmers’ use of glyphosate falls well below federal limits.’
Source: USAToday

It’s too bad there are no other options out there for someone who’d like a drink.