He’s for open borders, but don’t come backstage unless you’re invited! This bro is really something else.

Robert Francis O’Rourke, the defeated Senate candidate from Texas, took a break from his beatnik tour of America in order to #ResistTrump by holding a counter-rally in El Paso as Trump held his rally in the same city on Monday night.

The Jack Kerouac wannabe wanted to push his idea that The Border Makes America Great, and by that, he means open borders.

The Irish man who has adopted the Hispanic nickname, ‘Beto’ has been pretty clear that he’s not a fan of a border wall and that has been his position for a long time. In 2015, he posted a link to a Huffington Post article about El Paso, Texas, and Juarez, Mexico with the caption, ‘TEAR DOWN THIS WALL’.

The truth in 2015…⁦@BetoORourke⁩ wants to tear down EXISTING fences and walls. #OpenBorders pic.twitter.com/uG9hlLW7SO

He spoke against walls in his address to the crowd, all while standing in front of a chainlink fence. In his speech, he made the bold claim that ‘walls end lives’ which is a pretty hot take if you ask me. I could quickly get snide here and say, ‘What about houses? Should they remove their walls? How about public bathrooms? Prisons?’ Walls can certainly be a good thing, so Beto’s blanket statement is utterly ridiculous.

Of course, he’s not suggesting that we get rid of walls from homes or prisons, just the one that would allow us to control our national border where we have kind of a massive problem of people bypassing our legal immigration system and deciding that they want to live here.

I’m getting ahead of myself.

Beto O’Rourke: "Walls do not save lives. Walls end lives.”

You know what actually ends lives, Beto? Getting behind the wheel of a car while you’re drunk.
?https://t.co/SuJwrxVGWapic.twitter.com/oSTxR5roYc

Caleb Hull’s tweet is pretty spicy — but it’s true. I really don’t want to be lectured about the ‘morality of walls’ by a dude that at 26 years old, got behind the wheel of a car when he was drunk, was going 75 MPH, caused an accident, and then tried to flee the scene.

But let’s look at Beto’s premise — he is saying that many people have died in their attempt to cross the border illegally and by building more walls, we’re pushing them to more dangerous paths across the border.

Here’s a thought, Robert Francis, maybe we don’t want them to cross illegally at all. Maybe it’s because we don’t want people to be stuck in an underground economy for the rest of their lives. Maybe, just maybe, we want the United States to actually have a nation ruled by laws and not allow anyone who wants to — well-intentioned or not — to just walk in and bypass that system that is in place.

The rich part is that Beto spoke about the immorality of walls while using barricades and walls to protect him from the crowd.

"Walls do not save lives. Walls end lives."

Beto O'Rourke countered President Trump's demands for a border wall during a rally of his own last night in El Paso. pic.twitter.com/0WwCYMh46v

Here’s a photo of Robert Francis taking some selfies with adoring fans standing behind a barricade: 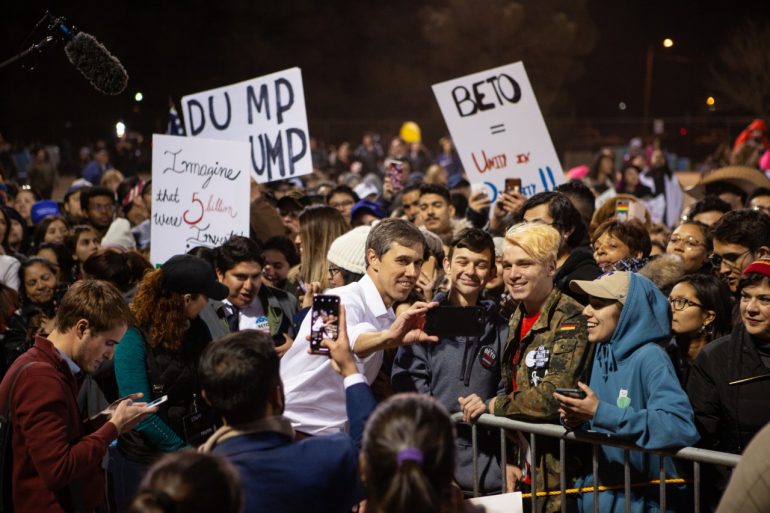 In order to protect himself & control who entered backstage at his anti-wall rally – Beto used A WALL.

While being protected BY A WALL Beto said, “Walls do not save lives. Walls end lives.”

Interestingly enough, after his rally, some of his supporters bashed an effigy of President Trump. That’s probably because of all the barricades, amirite?

Remember when Beto said walls cause violence and death?

This was Beto’s anti-wall rally:

Maybe it’s not walls that cause death to people, but the decisions that they make.

Putting up a border wall where it makes sense would disincentivize illegal border crossing. It’s hard to believe that this is a controversial position in America. It used to be that Democrats and Republicans were all united against illegal immigration and pro-wall.

Man, Trump Derangement Syndrome™ has some really stunning symptoms like the inability to comprehend basic facts and memory loss.

The Dems look at Beto like he’s some kind of rockstar, but he’s just schlepping garbage ideas just like Occasional-Cortex does.

Republicans have a bad-ass President who isn’t going to take crap from the Media(D) and the #Resist crowd.