The West is intent on rebuilding the historic Parisian Cathedral. ISIS has already indicated they will do their best to stop us.

ISIS propaganda peeps have released a poster with Notre Dame on fire: 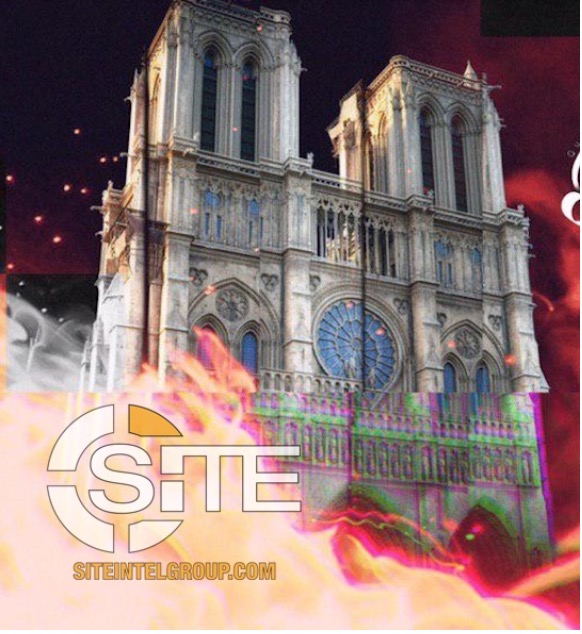 (To be clear, the logo on the image is from the watchdog group, not an ISIS affiliate)

There was a message affixed to the poster, with a threat against the Belltowers that managed to survive the fire:

The ISIS-linked Al-Muntasir group published a photoshopped image of the bell towers burning with the warning: “Wait for the next.” On Monday, as the 850-year-old cathedral burned, the group posted a picture of the inferno with the caption: “Have a good day.” Despite a rash of online terrorism rumours on Monday night the Notre Dame blaze has been deemed accidental and not arson or terror-related.

It shouldn’t surprise anyone that ISIS wants to destroy any vestiages of rival religions. Like the extreme version Leftists on campus shouting down and silencing rival ideas that they cannot refute, the jihadis of ISIS simply cannot compete with other, better ideas. So they attack them.

In fact, ISIS are such garbage people that they’ve been doing a good job of driving people AWAY from Islam… in their own backyard.

In Evangelical Christian church for Muslim converts has opened in the Syrian city of Kobani, which was previously besieged by the Islamic State (ISIS).

Pointing to the experience of war and the oppressive and hard-line interpretation of Islam promoted by ISIS, worshippers said these factors played a role in their decision to convert, according to Reuters. Muslim scholars from around the world have condemned ISIS’ interpretation of Islam, but the faith of some in the Kobani community had been affected by extremist violence.
Source: NewsWeek

Driving people away from Islam?

The Church of Christ has been outliving its pall-bearers for a long time. The opposition of Islamists are just one more pothole on that long and winding road.

‘Let’s Play Strip Poker’: Former Cuomo Staffer Accuses Him Of Kissing Her Without Her Consent
February 24th, 2021 The Mental Recession