The world watched in horror as one of the most beautiful and significant places on the planet was engulfed in flames.

Well, maybe not everyone was horrified.

Those that recognize truth, beauty, and goodness, however, were mourning the fire that was ravaging the 850-year old cathedral. Not only is the Cathedral of Notre Dame a historic Catholic church that is still in use; it is also the seat of the Archbishop of Paris. Notre Dame is also a repository of art, history, a testament to Western Civilization, and one of the best-known landmarks in the world. It is inextricably tied to the history of France, and that of Paris in particular.

The cross-shaped building took almost 200 years to build and could have been destroyed in a few hours. The fact that this happened on the first day of Holy Week is even more bitter for many Christians.

The moment the spire collapsed was absolutely devastating to watch:

The images are haunting: 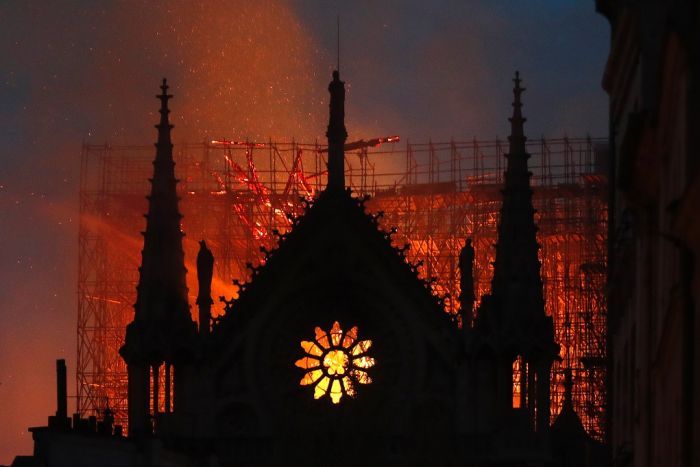 In the morning light, the extent of the damage is clear. 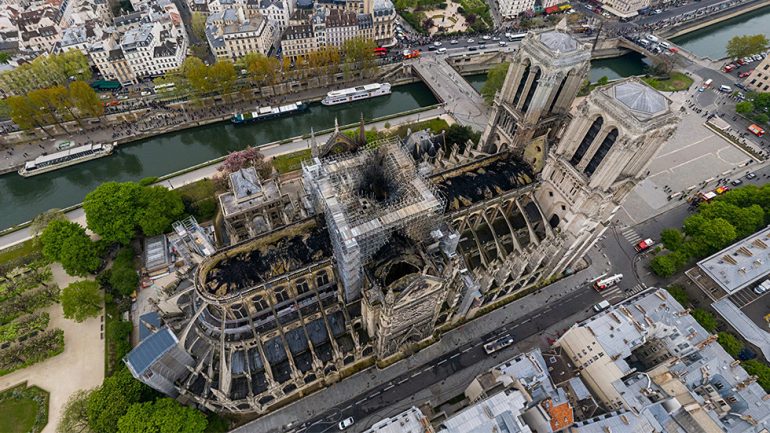 The wooden structure is gone, the spire is gone, the roof is no more, and the damage is significant. The artwork and the crown of thorns relic were saved. The intricate pipe organ and some of the stained glass do not appear to have been damaged.  Thankfully, no one was injured.

The first look inside the building is devastating yet hopeful.

BREAKING VIDEO: A look inside the Notre Dame cathedral as flames can still be seen burning on the roof of the cathedral. The Altar & Cross remain. #NotreDame #Parispic.twitter.com/HlFpg7iw4H

The Daily Mail’s Robert Hardman was one of the first to be permitted into Notre Dame after the fire was extinguished.

Sparks and bits of flaming woodwork are still cascading from the remnants of the 12th-century roof.

The smell instantly sears the back of your throat like a dose of smelling salts and my feet are soaked. The ancient black and white tiles leading up the aisle are under a gently-flowing river of hose water from the fire crews pumping what seems like much of the River Seine from their elevated platforms.

Yet I can faithfully report that the Cathedral of Notre Dame is not entirely destroyed. Because I am standing inside it – alongside the French prime minister.

In the early hours of this morning, I was among the first people to be allowed inside the ruins of one of the world’s finest cathedrals following the fire which has shocked not just the entire French nation but much of the planet.

The cross at the altar remained standing, almost glowing, amidst the rubble. 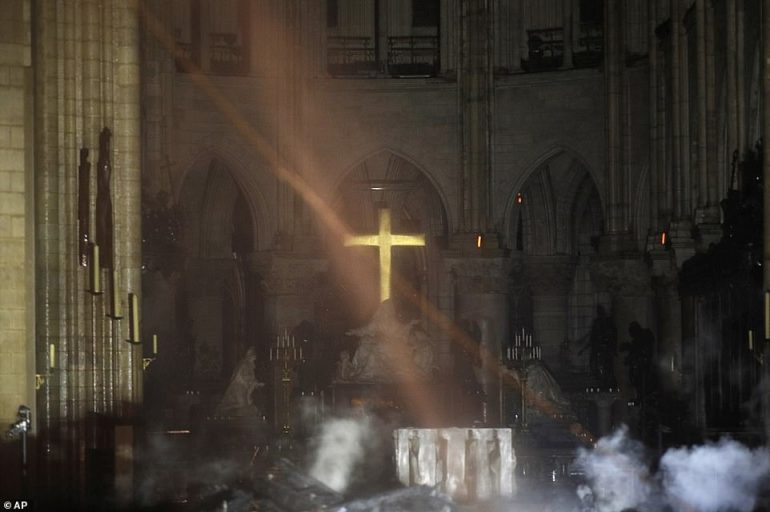 Firefighters in the midst of the smoke and falling embers: 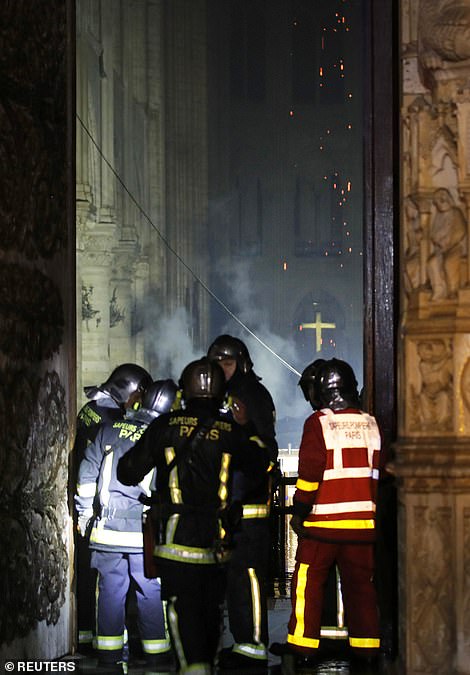 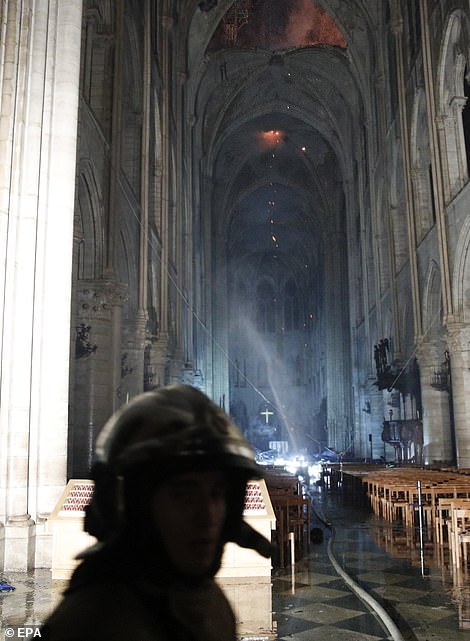 The fire has destroyed most of the roof, but portions of the incredible architecture remain. 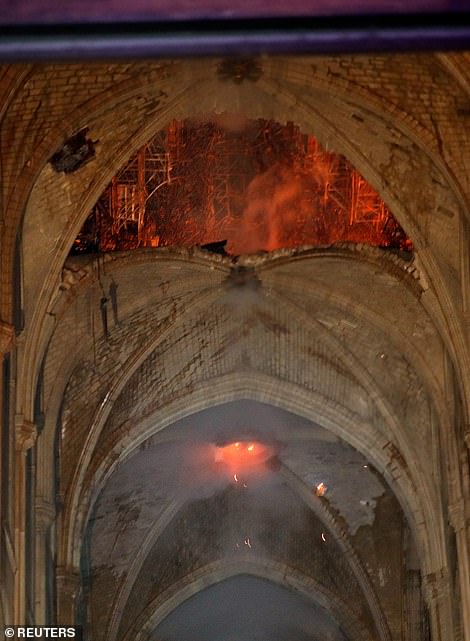 Here is a view of the damaged and exposed beams: 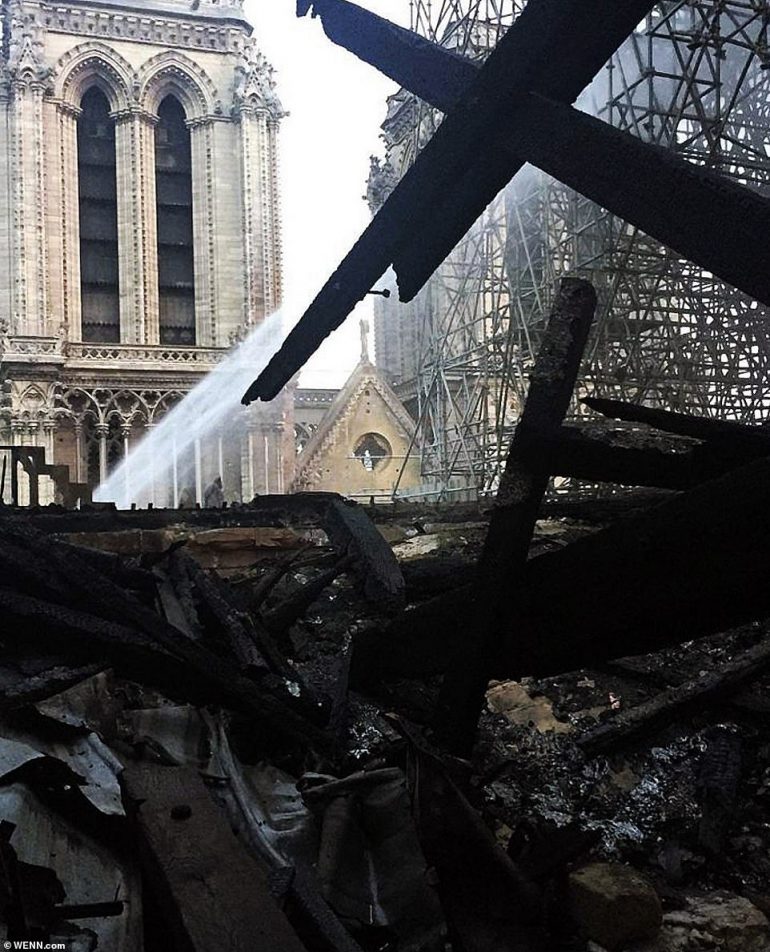 Here is an image in front of one of the signature intricate stained glass rose windows: 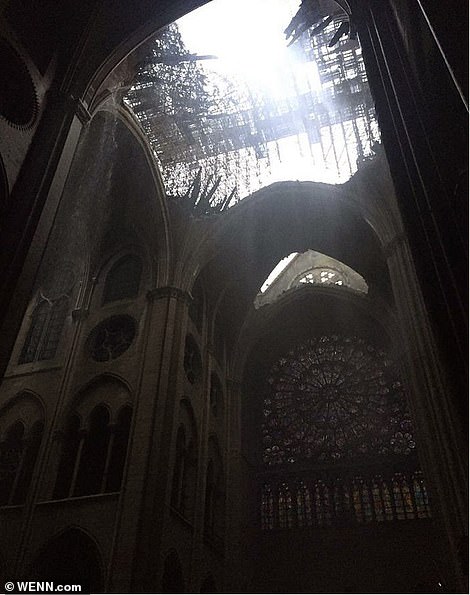 And here is the debris from the roof: 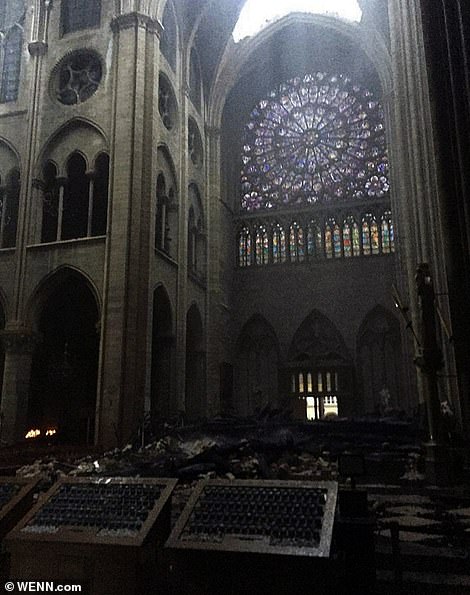 Portions of the stone exterior are covered in soot. 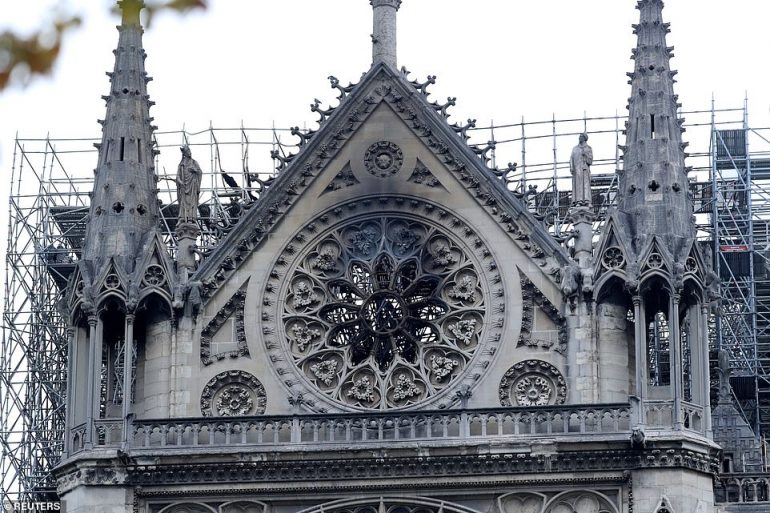 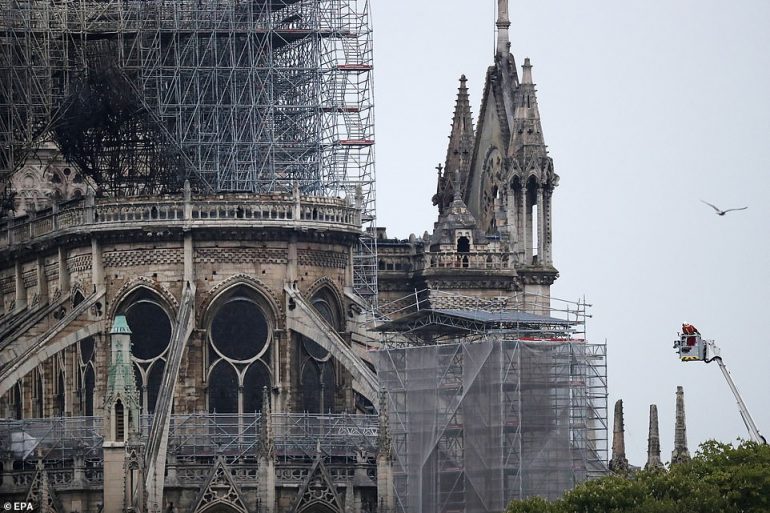 Rubble from the damage: 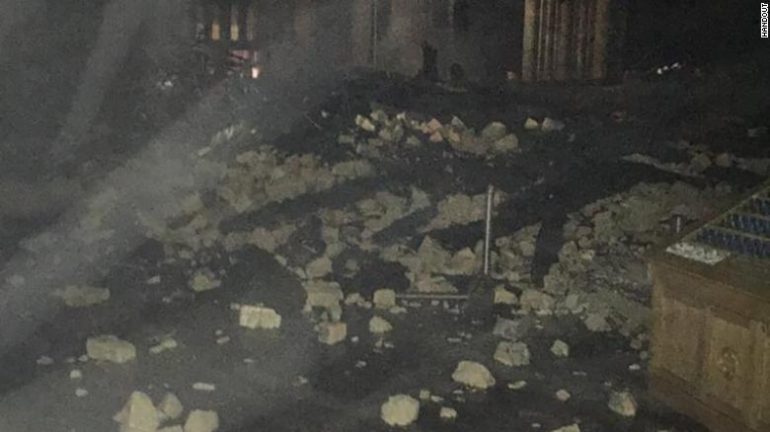 Incredibly, after hours of fighting flames, these candles lit by worshippers remained lit.

Certainly, Notre Dame’s spire is no more. Great chunks of its eastern end are no more. Its world-famous stained glass windows are in smithereens and the whole edifice is open to the skies.

But Paris will wake today to see that the cathedral that has defied world wars, enemy occupations, revolutions and mobs galore is still poking its head above the Paris skyline.

And at 1am today, at the far end of the cathedral, illuminated by lingering embers and firefighters’ equipment, I could just make out a stunning symbol of defiance through the gloom: the unmistakeable sight of a crucifix on what remains of the altar.

Notre Dame is gravely damaged. Yet its most spectacular features – the 850-year-old twin towers – are still there. For centuries, these were the highest structures in Paris until the Eiffel Tower came along. To this day, they are instantly recognisable the world over. And last night, though looking very sorry for themselves, they were in one piece as I stood beneath them alongside a posse of fire crews and prime ministerial aides.

President Emmanuel Macron is committed to the rebuilding of Notre Dame.

He has pledged to rebuild Notre Dame, saying: ‘Notre Dame is our history, our imagination, where we’ve lived all our great moments, and is the epicentre of our lives.

‘It’s the story of our books, our paintings. It’s the cathedral for all French people, even if they have never been. But it is burning and I know this sadness will be felt by all of our citizens.

‘Tomorrow a national subscription will be launched for people around the country to help rebuild this great Notre Dame. Because that’s what the French people want. That is what their history requires. Because that is our destiny.’

In the end, as historic and as beautiful as Notre Dame was, it is still a building.

The Church of Christ isn’t a building made with hands — here is the church: