What does it really say about someone if they’re triggered by the Red White And Blue?

In Laguna Beach, California, the person responsible for designing the paint for the squad cars did two things: (1) came up with a great patriotic design and (2) made the Left lose their mind.

Great job, whoever you are.

A local artist, Carrie Woodburn. lodged a complaint … over this: 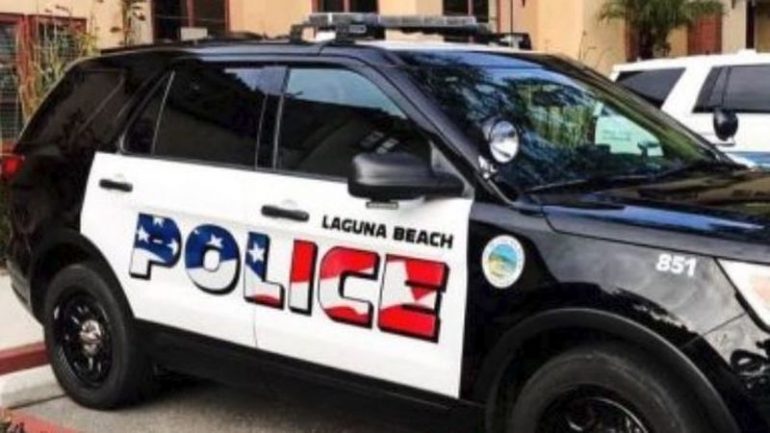 She called it ‘too aggressive’.

We’ll let our readers decide whether what she said next was ‘clarification’ or ‘backpedaling’.

Woodburn, whose parents served in the military, said she wasn’t objecting to the appearance of the flag, and perceived some of the missives as threats.

“I don’t really care too much about the design, other than what I said — it’s bad art,” Woodburn said. “I’m being attacked for that because the narrative feeds a fire of division, which is what our culture has become.”
Source: LATimes

There was another reason they might have been upset:

Longtime Laguna Beach resident Patrick Cannon said that when he sees the new logo on police cars, he sees “Immigration and Customs Enforcement” because the red and white of the flag runs through the capital letters “ice” in “police.”

“We’re Rainbow sandal-wearing, avocado-eating … surfers and artists, and inclusion is part of our town,” Cannon said. “We do not include our Hispanic community by putting ‘ICE’ on our police cars.”
Source: LAtimes

There were a LOT of people present at that meeting to share their opinon.

What did they decide?

They’re sticking with the flag design.

It turns out there is still plenty of heart left in Laguna Beach.

Laguna Beach police cars will keep the American flag-adorned lettering that became the subject of a nationwide debate over whether the design is patriotic or “threatening.”

The decision came in a 4-1 City Council vote Tuesday night after two hours of raucous public comment that at times included the singing of the national anthem and chants of “USA.”