The new section of the border wall is anti-climb, faster to build, and less expensive. What’s not to love?

In Calexico, California on Friday, President Trump revealed the completed section of the new Big, Beautiful Wall, and it’s spectacular!

President Donald Trump got his first in-person look at a section of the 30-foot ‘bollard wall’ his administration is building along the U.S.-Mexico border on Friday, touring a California border town where a 2-1/4 mile stretch of barriers is replacing antiquated fencing made from landing mats scavenged during the Vietnam War era.

The White House called Trump’s destination ‘the first completed section of the new border wall along the U.S.-Mexico border.’

Trump said the imposing structure, made of reinforced steel slats spaced apart so U.S. Border Patrol agents can see the other side, is ‘anti-climb’ and can be made quickly.

Just checked out the new Wall on the Border – GREAT! Leaving now for L.A.

Watch as he speaks to the press about the wall:

And yes, the wall is big and beautiful! It even has a plaque with POTUS DJT’s name on it. 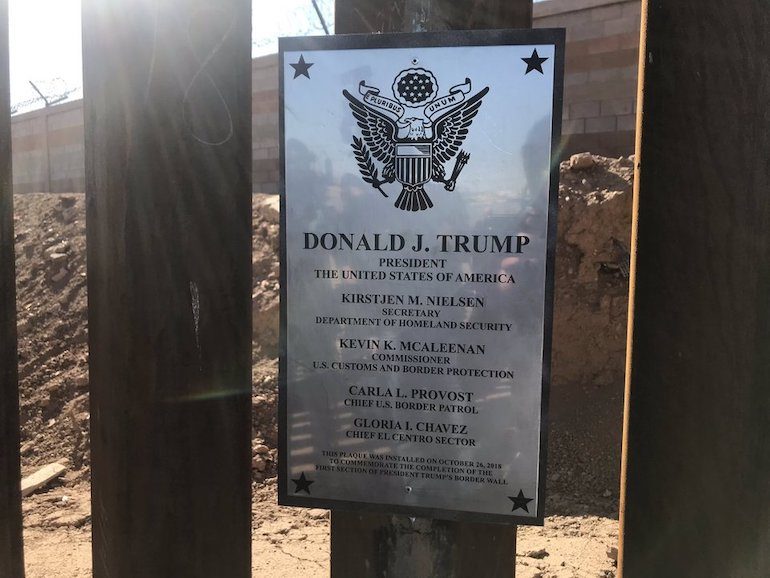 Here’s a rather exciting video of the plaque being installed. Ok, so it isn’t particularly exciting. But it does give you a better view of Trump’s Big, Beautiful Wall™ without the concrete barricade in front of it.

Of course, this was California, so the #Resist crowd was also there. They were as mature as they always are in their protest.

Opposition to the border wall was from the top, too. Democratic Governor Gavin Newsom made sure that he threw in his two cents. (Which he should really keep. After all, when the Feds are finished suing him for the misappropriated federal funds used for the failed bullet train system, Cali is going to need it.)

As Trump landed in California, the state’s governor ripped the president’s push for Congress to pass legislation that would tighten asylum rules to make it harder for people to qualify.

‘Since our founding, this country has been a place of refuge – a safe haven for people fleeing tyranny, oppression and violence. His words show a total disregard of the Constitution, our justice system, and what it means to be an American,’ said Democratic Gov. Gavin Newsom.

The “walls are immoral” and “no human is illegal” bleeding-hearts can’t seem to wrap their wee, little brains around the fact that there is indeed a crisis at the border and it’s being exploited by nefarious individuals that prey on the desperate that want a better life.

CBS News ran a rather disgusting piece about the human traffickers that facilitate criminals, drug smugglers, and gang members to cross the border. The coyotes are also the ones that use sex as payment — or just rape, fleece the “immigrants” of anything they own of value, all for the opportunity to endanger their lives and enable them to break the law in a foreign country. But these people are humanitarians, you guys.

During a Border Security Roundtable discussion President Trump had with Customs and Border Patrol agents in Cali, he says that not only is human trafficking a major issue, it’s also taxing our resources.

President Trump then said that “the system is full” and we can’t handle more.

‘There is indeed an emergency on our southern border,’ Trump said at a border security briefing, adding that there has been a sharp uptick in illegal crossings. ‘It’s a colossal surge, and it’s overwhelming our immigration system. We can’t take you anymore.’

And lo, CBP agrees. Also, fake families are crossing the border. Who could have seen that coming?

Thank you to all of the brave men and women of CBP who protect our country each and every day. pic.twitter.com/jpW7B5NK6p