In its 22nd season, the show suddenly “outed” a beloved character as a gay man.

If you’re not familiar with the popular children’s show on PBS that has been running since 1996, you might recognize the “Arthur fist” meme that was going around a few years ago. Many used the close-up image of the balled fist to express rage, but some were… shall we say, definitely not PG.

Here’s an innocuous one using the lyrics of the Arthur theme song: 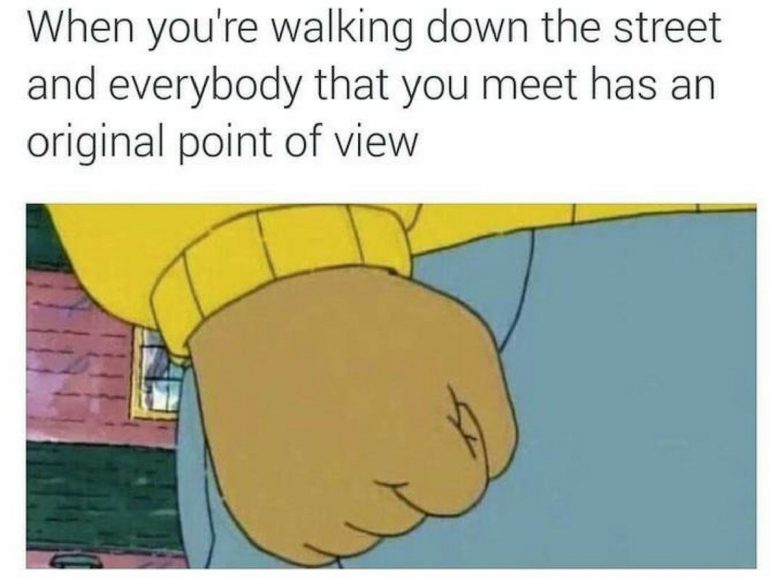 It’s the left in a nutshell, amirite?

Anywho… Alabama has decided not to air the episode which contains a same-sex wedding saying that it would be a “violation of trust” to broadcast it.

In the long-running PBS series, Mr. Nigel Ratburn has been an elementary school teacher for the animated characters, but his sexual orientation was never mentioned.

Don’t you just love it when a character is suddenly revealed as gay just to add to the “wokeness” score?

J.K. Rowling did this with her hugely successful Harry Potter series when she suddenly announced that Professor Dumbledore was gay after the final book was released. Rowling has created a spinoff series based on a rift on this alleged gay relationship and is taking heat from progressives for constantly revising what that relationship actually was and not embracing the “progressive world” that she writes about.

Rowling attempted to do it again when she said on Twitter that one of the main characters, Hermione Granger, was actually black in the books… except she wasn’t. But progressives appreciate that she attempted to be more inclusive after the fact.

That right there is the problem. The wokescolds that drone on and on about “intersectionality” and “diversity” because of the need to “have representation” everywhere will excuse this rewriting of a character as inclusive. But if you’re a progressive — it isn’t. The same people that talk about the “black experience,” or “female experience” or “trans experience,” etc., etc. and how that is a defining characteristic of who you are as an individual are somehow fine with it being tacked on as an afterthought.

Let’s be real, this is just ridiculous virtue-signaling by progressives who want to be more “inclusive” and instead of creating new characters, they’re changing old ones to suit their leftist worldview.

The Arthur cartoon was based on a series of books written by Marc Brown and is aimed at children ages 4-8, but children younger than that watch the show.

I’ll take a moment here to point out that we still have the freedom to believe that the Biblical standard of marriage is between one man and one woman. That is not bigotry. Nor should it be controversial to hold back conversations until children are able to comprehend the topic. It’s being sensitive to your child and allowing that child to remain innocent as long as possible. That’s not a bad thing. That said, it’s also important to teach your children to be courteous to everyone, especially if you are attempting to raise them in a Christian home. We are all fallen beings made in the image of God.

The director of programming at Alabama Public Television, Mike McKenzie, says that a rerun will air instead of the same-sex marriage episode.

‘Parents have trusted Alabama Public Television for more than 50 years to provide children’s programs that entertain, educate and inspire,’ McKenzie said in a statement.

‘More importantly – although we strongly encourage parents to watch television with their children and talk about what they have learned afterwards – parents trust that their children can watch APT without their supervision.

‘We also know that children who are younger than the ‘target’ audience for ‘Arthur’ also watch the program.’

McKenzie said that there are no plans to air the episode if they believe that it would take away the choice from parents who believe it to be age-inappropriate content for their child.

It looks like there’s going to be more pre-empting of episodes ahead.

PBS has announced that Arthur has been signed on for at least 4 more seasons where the show hopes to tackle more topics like acceptance and the LGBTQ community.

In a screenshot of the episode, the title character, Arthur, is sitting beside his friend smiling and chatting as the grooms walk down the aisle. 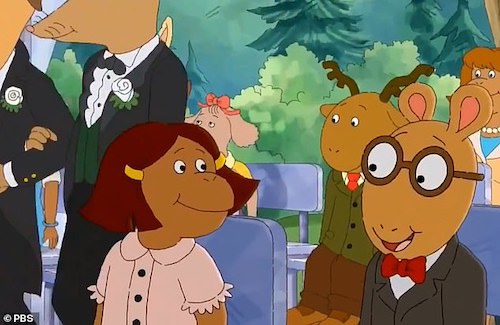 Whatever you think about gay marriage, (and there is a huge diversity of views on the right side of the aisle,) the vast majority of conservatives agree that decisions regarding when to introduce the ideas surrounding sex, including gay marriage, is something that should be left up to parents. They shouldn’t be forced to introduce an idea to kids that just aren’t developmentally ready for because of a cartoon.

Cartoon of the Day: Science For The Lambs
March 1st, 2021 Conservative Firing Line

Trump to be President Again on March 4th, According to QAnon Lore
February 28th, 2021 Liberty Hub

Trump STRONGLY Hints That He Will Run for President In 2024 During CPAC Speech (Video)
February 28th, 2021 Flag And Cross