This middle school must be desperate to increase their “wokeness” score.

The event at the progressive charter school included the school’s step team, a panel with a City Council member, and the executive director of the Durham LGBTQ Center… and a couple of drag queens. Doesn’t that sound like an absolute blast?

Several students had left Central Park School for Children in Durham, North Carolina citing incidents of bullying. Taylor Schmidt, an eighth-grade teacher at the school, was concerned that the LGBTQ+ students were facing “more bullying and other problems than their peers” so he sought help from local Drag Queens.

Schmidt and Schara Brooks, a fellow eighth-grade teacher at the progressive charter school in Durham, began to look for new ways to help.

They decided that one answer to bullying might be to focus on joy.

Drag culture is deliberately sexualized and filled with double-entendres. In our hyper-sexualized society, middle schoolers are savvy enough to catch on. So, bringing in Vivica [See] Coxx? I’m sure that the preteens didn’t notice, right?

But what was the message that Durham Pride’s lead organizer, Justin Clapp, (aka “Vivica”) is bringing to the students? Well, that they should be proud of having a school that would bring the “famous” drag queen to perform for them!

Can’t you just see those teachers excited about the empowering talk?

“You should be proud of Central Park School for Children,” Coxx said. “You have a famous person standing in front of you who wishes I had this experience when I was your age.”

In between Beyonce and Nikki Minaj songs, Coxx and Daie connected with the students over growing up in Durham and what it was like to feel different, slipping in quick lessons about LGBT history along the way.

For one song, Daie swirled a floor-length skirt, each layer of fabric a different color of the rainbow. Cheers erupted when she pulled the skirt off to reveal a gold jumpsuit and knee-high gold boots.

Nothing says “be yourself” and “embrace differences” better than gay men dressing and caricaturing women, amirite?

I guess all of the conservative speakers that are getting deplatformed from college events were unavailable or unreachable on their suspended Social Media(D) accounts.

If they want to talk about bullying, why not have someone from Open Doors talk about the persecution of Christians around the world?

They could have invited Nick Sandmann from Coventry Catholic School to talk about how to properly handle bullying after people including celebrities and the Media(D) are quick to rush to judgment because of a hat and a smile.

The self-described “child-centered, progressive charter school” has a “Rainbow Unboxed” club — a Gay-Straight Alliance which aims to promote “inclusion of ALL students.” I wonder just how inclusive they’d be with someone who believes in the traditional definition of marriage? I’m guessing it would be just fine to bully and harass that individual for not being “tolerant.”

The Raleigh News & Observer said that the overall response from the kids was positive.

For each student who sank down into their hoodies, another dozen bounced in their seats or danced in the aisles.

In a survey afterward, a fifth-grader said: “I really, really, loved the Pride and Liberation celebration. I think it really showed and maybe helped others who are LGBTQ+ really see that they are not alone and that they can really express who they are.”

“Durham is very one of the most welcoming communities,” a seventh grader wrote “but we still do always have more room to be more welcoming.”

This wasn’t Clapp’s first time performing in front of children. He performs an “all-ages” show one Saturday a month to accommodate the “folks with bedtimes.” He says it’s a good thing for kids to be exposed to the overtly sexualized drag performances. In an interview with Indyweek, he tells the interviewer of an interaction with one child that stuck with him.

…there was a show where a parent brought a child. It was just so much fun—the kids were laughing and giggling, but this family came up to me at the end of the show, because they wanted their child to have a hug from me. The child said “yes,” and we gave each other a hug. Well, I later got a message from the family that their child, who was assigned male at birth, found out it was OK for boys to wear skirts, and that boy has been wearing a skirt. Regardless of the gender identity of this child, they just wanted to wear a skirt and for it not to be complicated. And the family shared that bringing their child to a drag show had empowered the child to wear whatever the child wanted. That has always stuck with me.

It’s apparently “empowering” to normalize boys wearing girls clothing “because he wants to” and then bring in drag queens to combat the bullying that follows.

CNN reports that the “House of Coxx” drag house has been “an advocate for social and racial issues in the Durham area for years.” They also quote the performers using their stage names. “Stormie Daie” said that “she” hopes that the children take the message seriously.

“You hope that the children listen to this,” she said, “so that they know we didn’t have this when we were growing up. We weren’t seeing people like us being celebrated.”

…VIvica said the school was intentional about the message.

“Central Park didn’t water it down, but they made it age-appropriate to give a depth to social justice and activism, which is the core of the queer experience.”

Afterward, students met the performers and showered them with hugs and accolades.

“It was so beautiful and so well received,” she said. “I am still overwhelmed. It was ridiculously good.”

Schmidt said that the goal of the event was to “remove barriers to success” and address the “roots of these behaviors.”

“Our drive was to remove barriers to success, belonging and the ability to thrive for all students,” Schmidt said. “It called for a hard look at the roots of these behaviors and intentional actions to liberate not just the bullied from oppressive acts, but the bully from the oppressive root causes of their actions.”

CNN did say that parents were notified and that students were permitted to opt-out from the event, but that most attended. Schmidt, the teacher that organized the event, pointed to one student,  an eighth-grader named Katya:

“This event felt extremely important to me as a student and as a member of the LGBT community,” she said. “I am so proud of my school for making such huge steps to make Central Park a safe, intersectional space. There have been many places I feel that I don’t belong and this celebration has helped to make Central Park not one of them.”

A 13-year old is thrilled that her school is so woke that they’ll bring in overweight drag queens to sing, dance, and strip off a rainbow skirt to reveal a gold bodysuit.

I mean, how do you get more woke than that? 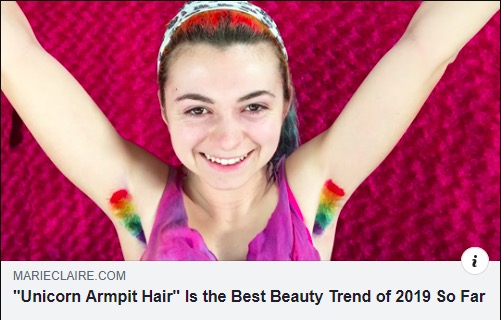 Oh, Lord help us all!

Let’s just hope that these performers were properly vetted before entering the school.

ClashDaily has reported that the Houston Library had allowed a pedophile to entertain kids during their “Drag Queen Storytime” which is an egregious failure on the part of the Houston Public Library.

What do you think? Is the school educating or indoctrinating the students?

Is Bringing In Drag Queens To Perform For Students Educating or Indoctrinating Them?

Testosterone levels are already dropping, what are these “progressive” educational institutions trying to do — eliminate it entirely?