Hypocrisy, thy name is Fauxcahontas.

Senator Elizabeth Warren(D-MA) has been pushing the breaking up of Tech Giants as part of her Presidential campaign. In particular, she has focused on Facebook and its role in data mining and buying up competitors.

In March, Warren posted a video announcing that she wanted to break up “Big Tech” and (hilariously) it was initially removed by Facebook. The social media giant said that the “use of corporate logo” was against their advertising policy. Facebook later reversed their decision “in the interest for allowing robust debate.”

Warren responded to the removal and restoration of the ads this way:

Curious why I think FB has too much power? Let's start with their ability to shut down a debate over whether FB has too much power. Thanks for restoring my posts. But I want a social media marketplace that isn't dominated by a single censor. #BreakUpBigTech https://t.co/UPS6dozOxn

While she is on her anti-Big Tech diatribe and has made attacking Facebook a pillar in her 2020 campaign, it seems that she’s still relying on the social media network to target potential voters.

Warren is currently running third behind Biden and Sanders in the crowded Democrat primary race.

From the Daily Caller:

Warren’s campaign page spent more than $2 million on Facebook ads between May 2018 and May 2019, according to Facebook’s ad archive. The majority of that was spent promoting her presidential campaign.

Democratic candidates have relied on Facebook to target small-dollar donors in order to reach the 65,000 donor threshold needed to qualify for the first Democratic debates…

…Warren has spent more on Facebook ads in the past year than either Biden or Sanders, according to Facebook’s ad archive. 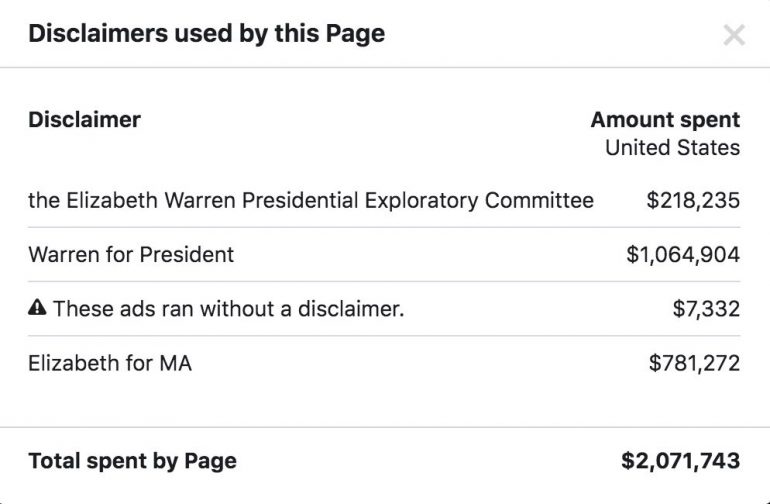 Today’s big tech companies have too much power — too much power over our economy, our society, and our democracy. They’ve bulldozed competition, used our private information for profit, and tilted the playing field against everyone else. And in the process, they have hurt small businesses and stifled innovation…

…That’s why my administration will make big, structural changes to the tech sector to promote more competition — including breaking up Amazon, Facebook, and Google.
Source: Medium

Was that whole 1/1024th Native American thing not enough embarrassment for you? Charlamagne the God just said on the radio that “you kind of sound like the original Rachel Dolezal a little bit.”

As well it should. Warren says that didn’t claim it herself or that it “didn’t make any difference” in her career — but that’s just hogwash. She did claim that she was “American Indian” on her application for the Texas Bar Association.

Well, this is awkward… https://t.co/DxmqvsCd3h

Now she’s claiming that she wants to break up “Big Tech” — but only after she has utilized it to its fullest potential in reaching voters.

I’m actually rooting for her. I think a Trump/Warren head-to-head in 2020 will be fan-freaking-tastic! Just think of all the memes!