The National Women’s Soccer Team has won again… as the most unlikable team in the U.S. Congratulations, ladies! You truly deserve it.

The Daily Mail called the Co-Captains, Alex Morgan and Megan Rapinoe “arrogant” and said that the pair were so unlikable that even France was cheering for England rather than the Americans.

The U.S. Women’s Team has made a lot of headlines lately, which has brought attention to a sport that has largely been ignored in the United States. This is due in no small in part to the woman who shows that there is indeed an “I” in Team, Co-Captain, Megan Rapinoe. The (honestly) quite talented athlete hasn’t been making a name for herself on her talent alone, however. She’s drawn attention because she is a lesbian and an LGBTQ+ activist, and has openly shown her disdain for the United States by refusing to stand for the national anthem, and is openly #ResistTrump.

Here are several reasons that the U.S. Women’s Soccer Team is so difficult to like.

1. They are politicizing a sport, and most Americans just don’t like that.

Megan Rapinoe has said that she feels it is her duty to use her platform to push her political agenda.

Somehow being able to play a sport at an elite level suddenly makes you an expert in everything. Who knew?

She’s so politically astute, that in her speech when New York City was giving the team a ticker tape parade, she was unsure how to pronounce the surname of the Democrat Governor, Andrew Cuomo. Governor Cuomo’s brother is CNN’s “news” anchor Chris Cuomo, and their father was a firmly entrenched NY politician for three decades. The Cuomo name isn’t exactly an unknown one.

(Well, at least she’s not watching CNN, so that’s actually a plus.)

2. They’re disrespectful of the flag and the anthem.

Rapinoe refused to sing along the national anthem at the opening World Cup game against Thailand this year. At least she stood for it… this time.

Rapinoe was quick to follow Kaepernick’s lead on his kneeling protests.

The Associated Press reported her telling America Soccer Now, “It was very intentional. It was a little nod to Kaepernick and everything that he’s standing for right now. I think it’s actually pretty disgusting the way he was treated, and the way that a lot of the media has covered it and made it about something that it absolutely isn’t. We need to have a more thoughtful, two-sided conversation about racial issues in this country.”

So, it’s all about how oppressive the United States is to its own citizens says the woman who plays a sport at an international level. Is there a country where equality of opportunity and freedom abounds in the same way as the United States? How about she asks the Saudi Arabian women’s team. Oh, wait… there isn’t one yet because girls are not allowed to openly play “the beautiful game” in Saudi Arabia.

When the team won the championship, they celebrated and one team member, Allie Long, waved an American flag around. She was going to hand it to Rapinoe, who refused it, and then, as they were mugging for pictures, it was dropped on the ground.

@ALLIE_LONG I understand the excitement of the moment, but please NEVER disrespect the ?? flag by dropping it on the ground! pic.twitter.com/OdPJqAP6r4

Which brings us to…

3. They’re a bunch of Narcissists who are not exactly great role models.

They dropped the flag because they were mugging for the camera.

But then, they like to mug for the camera.

A quick Google Image search of “Megan Rapinoe” and you get a significant number of images like this: 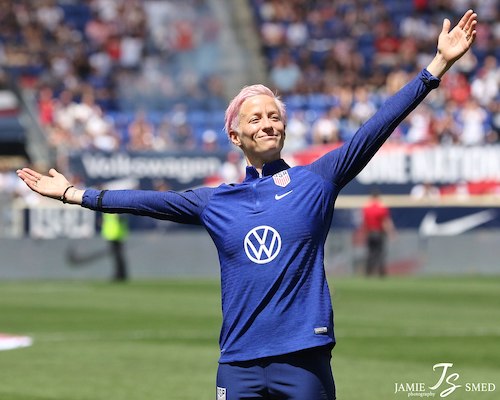 In this video, Megan Rapinoe mugs for the camera, holds the World Cup Trophy and a bottle of champagne, and says, “I deserve this.”

.@mPinoe holding a trophy and a bottle of champagne and yelling “I DESERVE THIS” is a mood, an inspiration, a battle cry for women nationwide pic.twitter.com/1r9YUDNBxD

No one is saying don’t enjoy the moment.

No one is saying it didn’t take hard work and discipline to achieve what may well be a Women’s World Cup Soccer Dynasty for the U.S., but geez, the entitlement here is just gross.

My sis is better than every other. ❤️. @Ashlyn_Harris I love you. pic.twitter.com/EnO75R8p7H

Check out this now-deleted video of one of the team members dropping f-bombs.

Hide your kids, hide your wives, lock your f**kin door's because I got the key too the muthaf**kin city and I'm comin for all yo f**kin b**ches.

Now, imagine for a second that that was Tom Brady saying that. What would the outrage be? It would be wall-to-wall coverage on the news for a month.

What exactly is Ashlyn Harris, saying here? She’s a vocal LGBTQ+ activist and a lesbian.  Considering this meme was started when Antoine Dodson was on the local news discussing how he chased off an intruder who had climbed into his sister’s bed in order to rape her, what precisely is the implication here? Interestingly, the complaint about the Dodson meme was that it reinforced stereotypes of blacks and downplayed the reality of an attempted sexual assault on Dodson’s sister. Way to go, successful white girl, in mocking black people and making a joke about possible sexual assault against women and children, all because your team managed to kick a ball into a giant net twice in 90 minutes.

So, bravo for undermining Rapinoe’s entire message of supporting black and brown people that are being “oppressed” in the United States by perpetuating a disrespectful view of black individuals.

This kind of behavior would be condemned if it was done by male athletes. It would be a prime example of “toxic” masculinity, even though it’s the kind of rude, a-hole behavior typical of people who are, in fact, complete jerks.

But women who behave like boorish men are applauded as “brave” and it’s lauded as “female empowerment.” If you condemn women acting like terrible men, then you’re sexist.

When they won handily 13-0 vs Thailand, they crowed mightily while the Thai team was in tears. Imagine any male sports team doing that and the hullabaloo that would ensue.

Then, there was the “tea-sipping” incident which Alex Morgan defended doing here:

Rapinoe was clear that she wasn’t going “to the f**king White House” because she dislikes the President.

“I’m not going to the fucking White House.” – @mPinoe pic.twitter.com/sz1ADG2WdT

Rapinoe had a long interview with CNN’s Anderson Cooper, and she spoke about her comments refusing to go to the White House. She said that the teammates that she spoke to weren’t interested in going to meet with President Trump.

I don’t think anyone on the team has any interest in lending the platform that we’ve worked so hard to build and the things that we fight for and the way that we live our life, I don’t think that we want that to be co-opted or corrupted by this administration.

In the same interview, she says that the entire team did want to go to Washington and meet with political leaders, though.

Rapinoe will meet with (increasingly unpopular) AOC and Nancy Pelosi, but the President of the United States — she’s going to pass on that. Why? Simple. She agrees with Democrats.

Remember when you could look up to national sports stars as unifying figures who inspire the best in all of us? Yea, those days are over.

Ironically, in her interview with Anderson Cooper, she was asked, “What is your message to the President?”

What was her response?

Says the chick that says she’ll meet with people willing to have a substantive conversation but only if they “believe in the same things that we believe in.”

Those on the left are blind to their own hypocrisy.

One elite-level female soccer player didn’t make the team and many think it was because of her open Christian faith. The Washington Times reported that Jaelene Hinkle, 26, “has been called the top left defender in the U.S. game.” She helped her team win the National Women’s Soccer League championship in 2016, but was not invited to be a part of the U.S. National Women’s Soccer team.

The Irish Times wrote that Hinkle was “the finest left-back in the NWSL,’ but that, “Hinkle likely would have been a fish out of water on the uber-woke women’s national team, some of whose biggest stars are openly lesbian, raising questions about whether she would have thrown off the squad’s chemistry.”

Hinkle made a public statement on Instagramdisagreeing with the Supreme Court decision to legalize gay marriage.
She told the 700 Club that she withdrew from games playing for the national team when the team chose to wear rainbow jerseys for Gay Pride.
Jaelene Hinkle stood up for what she believed in, and she is proud of her country, honors the flag, and yet… she was not rewarded for it.

ClashDaily has already covered this thoroughly in this article:

But this neverending stream of B.S. that women are paid less than men because of institutionalized sexism is utterly ridiculous.

The difference in pay is mostly due to the choices that women make. But hey, let’s not let facts get in the way of some Marxist activism, right?

I’m sure that there are more reasons that the U.S. Women’s Soccer team is so ridiculously unlikable, but it would require me spending more time paying attention to women’s soccer, which is pretty low on my list of priorities.