When Trump tweeted about Baltimore, the Media(D) outrage machine kicked into high gear.

Pundits called him Racist. Social media trolls and blue-checks alike cried out for his impeachment. The Democrats scolded him for speaking so badly about an American city.

But the President leveraged this ‘outrage’ to accomplish something none of his critics anticipated, something none of them saw coming. We’ll come back to that at the close of the column. See if you can guess what that is.

Democrats, Social Media activists and the press (but I repeat myself) cried out in unison one great collective … ‘How DARE you sir!’

(Except, they did so without the formality of any ‘sir’.)

We’ll come back to the tweets that got everyone on the Left so jacked up. You will notice there is exactly ZERO references to race, despite the fact that this is ‘smoking-gun proof’ that Trump is RAY-CIST!

First, as context, is a video of a former (and we might add, Democrat and scandal-plagued) Mayor taking a tour of the more dilapidated parts of Baltimore — she obviously didn’t do any door-knocking in THESE neighborhoods:

"What the hell? We should just take all this shit down.”

"Whoa, you can smell the rats." pic.twitter.com/BqhsL2Dsx7

The reactions to Trump’s tweets were entirely predictable. But the responses to them were gold. The one that will be hardest for the ‘Everything is Racist’ crowd to explain away is this video of the former Mayor of Baltimore — a Black Democrat woman, no less — touring the city.

Smell the rats. Tear this sh*t down.

But the TWEETS are the problem, people. Not the sorry state of squalor the good citizens of Baltimore are forced to endure. Never that! Don’t look behind the curtain, Dorothy!

Elijah Cummings (who has been less than transparent on his OWN tax issues) is pressing the ‘collusion’ issue and working together with Nadler and other Democrats in an undeclared Impeachment Investigation.

Trump, a noted ‘counterpuncher’ hit back at Elijah Cummings track record, bringing up the sorry state of the district he ‘represents’. 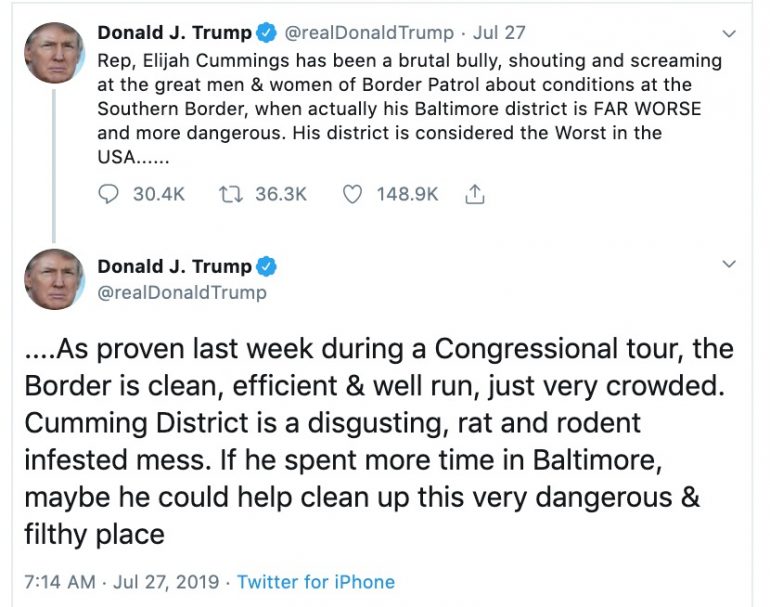 The President brought up a few other uncomfortable truths, too:

Rep, Elijah Cummings has been a brutal bully, shouting and screaming at the great men & women of Border Patrol about conditions at the Southern Border, when actually his Baltimore district is FAR WORSE and more dangerous. His district is considered the Worst in the USA……

So sad that Elijah Cummings has been able to do so little for the people of Baltimore. Statistically, Baltimore ranks last in almost every major category. Cummings has done nothing but milk Baltimore dry, but the public is getting wise to the bad job that he is doing!

“Elijah Cummings has had his chance to address it (crime & conditions in Baltimore) for decades, and he hasn’t gotten it done.” @PeteHegseth @foxandfriends How can he get it done when he just wants to use his Oversight Committee to hurt innocent people and divide our Country!

If racist Elijah Cummings would focus more of his energy on helping the good people of his district, and Baltimore itself, perhaps progress could be made in fixing the mess that he has helped to create over many years of incompetent leadership. His radical “oversight” is a joke!

For all the shots back and forth in this conversation, Trump Jr may have gotten the best dig in.

Elijah Cummings has done such a wonderful job representing Baltimore that people made a documentary about its Rat (aka vermin) problem.

The kicker? The article Don Jr. tweeted is from 2017. This has been a well-known problem that hasn’t been addressed for years.

Trump totally played them, and they don’t even know it. They are so addicted to calling Trump racist over every little issue, that they pounced almost reflexively.

But what is everyone talking about now? ‘Racist Trump’? Big deal, they were going to call him that anyway.

Trump shone a spotlight on Baltimore and (while he was at it) the smoking ruins of Pelosi’s home district and her failure to represent it.

We’re talking about the Democrat legacies of urban Hellscapes. And we owe it all to the fact that Democrats just can’t resist the bait.