Nobody can be THIS authentically dumb, can they? Has she just been trolling us all along? And is THIS tweet even the real deal?

The fact that we need to look up supporting evidence to determine whether this one is legit or not tells us a LOT about her legitimate Social Media use.

It pushes us toward one of two conclusions:

Either she is a Borat-level living parody piece who’s been quietly laughing and trolling us all to see just how far she can take this ‘dumb chick’ act, (and if so, she’s doing one HELL of a job of not breaking character) or she is an inexhaustible well of the ridiculous.

And she saves her most outrageous social media interactions for topics relating to Socialism, the American system of government, and — of course — the environment.

With hurricane Dorian bearing down on Florida, and people panicking due to fuel shortages at the gas stations, what did Ocasio-Cortez have to say (or at least SEEM to have to say, more on that later) about the impending natural disaster?

Did she offer words of comfort and compassion? Did she encourage them to stay safe and heed any emergency alert warnings?

Did she call on the nation to pray for their safety?

Or did she kick them while they’re down, and bludgeon them with a standard-issue Liberal Shaming Stick?

You instinctively know the answer to this question, don’t you?

Besides the Kim-Campbell level lack of human compassion in light of this slow-rolling natural disaster, see if you can spot the significant logic flaw in the tweet she (allegedly) sent out. 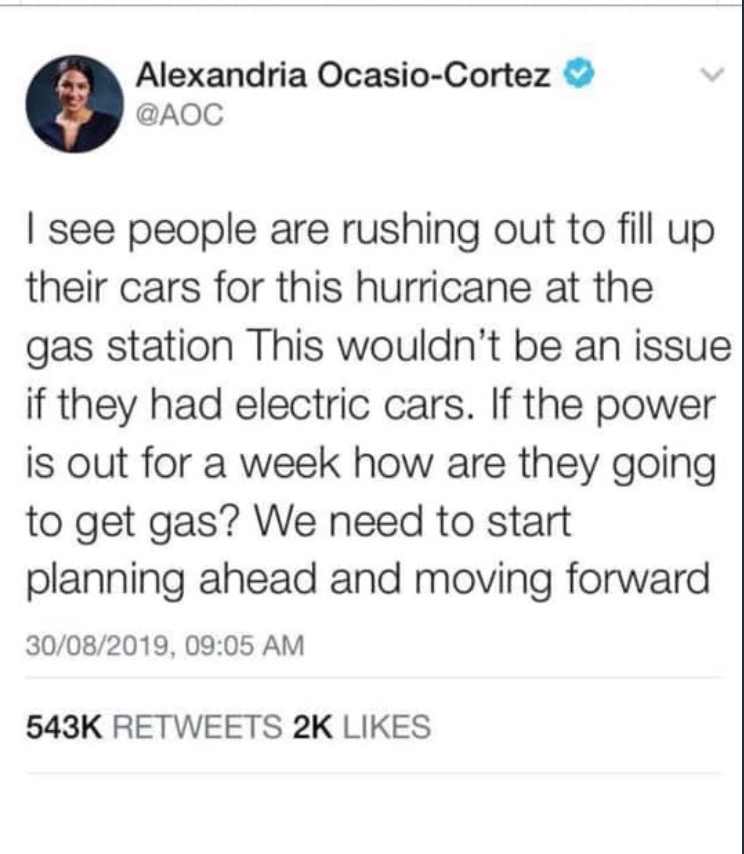 The tweet is nowhere to be found now, and there are two possible explanations.

She figured out how dumb it was, and it was deleted, OR it was faked.

And that’s a real problem with social media. We all need to be careful with jumping to conclusions because it can all be faked now. And worse, one bad tweet can totally destroy somebody’s life.

And if our credibility matters to us, we should actively avoid circulating ideas or rumors that we can reasonably believe to be false — however much they fit our own biases. That approach has kept people like us from jumping on the ‘Pizzagate’ bandwagon, and it WOULD have kept people from jumping on things like Smollet, the supposedly ‘smirking’ Covington Kid, and the Russian Collusion case. (If only the ‘reputable’ news outlets did the same.)

One of the strongest arguments against this being an authentic tweet (and the one that convinced this writer) is that an AOC tweet that was time-stamped for 9 am somehow, mysteriously didn’t generate any real clap-back until the evening.

In our up-to-the-second connected culture that’s a lifetime. And it strains credulity.

As ditzy as she has been known to be, we’re gonna have to call BS on this one, unless someone can authenticate it.

But the REAL problem is that it was entirely plausible that she might be dumb enough — or more accurately, IDEOLOGICAL enough — to tweet something like that out.

As bad as THAT was, (and in keeping with the ‘beyond parody’ theme of this article) her REAL tweet might actually be even MORE damning than that one.

Here she is bragging about the promo materials launch for her Green New Deal.

Our #GreenNewDeal posters are inspired by the original New Deal, updated for our future.

During the New Deal, FDR launched Federal One, a US project that employed 5,300 artists that created & taught art to envision America’s future.

These posters have a weirdly Soviet/Maoist/NoKo quality to them. https://t.co/3ytSSvzEWM

Ouch. But that’s just team MAGA ragging on her in a partisan fashion, right?

Nope. Even an editor from Leftist activist site BUZZFEED noticed.

I’m not saying the Green New Deal poster that AOC just tweeted reminds me of the WWII statue in Volgograd (formerly Stalingrad) but here we are pic.twitter.com/FjB14jmzXz

Not a good look is it?

Why do we have so much trouble taking this chick seriously? Not because she did the hard work to get the Democrat nomintion in her riding — she earned that against a complacent opponent.

It isn’t the school she went to or the working-class job she came from.

It’s not even her quirky aw-shucks use of social media videos to connect with her base. (Although some of the CONTENT in there makes us shudder.)

It’s all the LOOPY stuff and dangerous calls for increasingly centralized government power she keeps calling for. Not to mention her petty character attacks at anyone who dares disagree with her. Some examples: