So #MassacreMitch trending for days was fine. Live-streaming midnight harassment at his home — no problem. But posting the footage of it is a ‘violation’?

The twitter posting of a journalist who was reporting the news and the account of the political campaign of the top Republican Senator were both shut down by Twitter. This happened on the same day that Joaquin Castro pseudo-doxxing citizens for their political donations to Trump while accusing them of being racists is still live.

Massacre Mitch might sound like a ‘cute’ way to blame McConnell for ‘failing’ to strip all Americans of their Second Amendment rights in response to a pique of outrage. But it also sounds an awful lot like a violent call to action. Did that hashtag violate any terms of service? Of course not. It was even TRENDING.

At a point in which concerns of Silicon Valley tampering with elections has reached an all-time high, and even whistleblowers WITHIN the companies are showing concern, this selective political censorship seems a really bad idea.

It showed a person allegedly calling for violence against Mitch McConnell

Did the Left care about the potential threat this could pose to free and fair elections? They were too busy offering support for the #massacreMitch hashtag.

Newsweak (week?) was happy to push the propaganda that Mitch was a legitimate target because he has been paid not to care about people dying.

This is one of several examples that made it into their ‘news piece’. 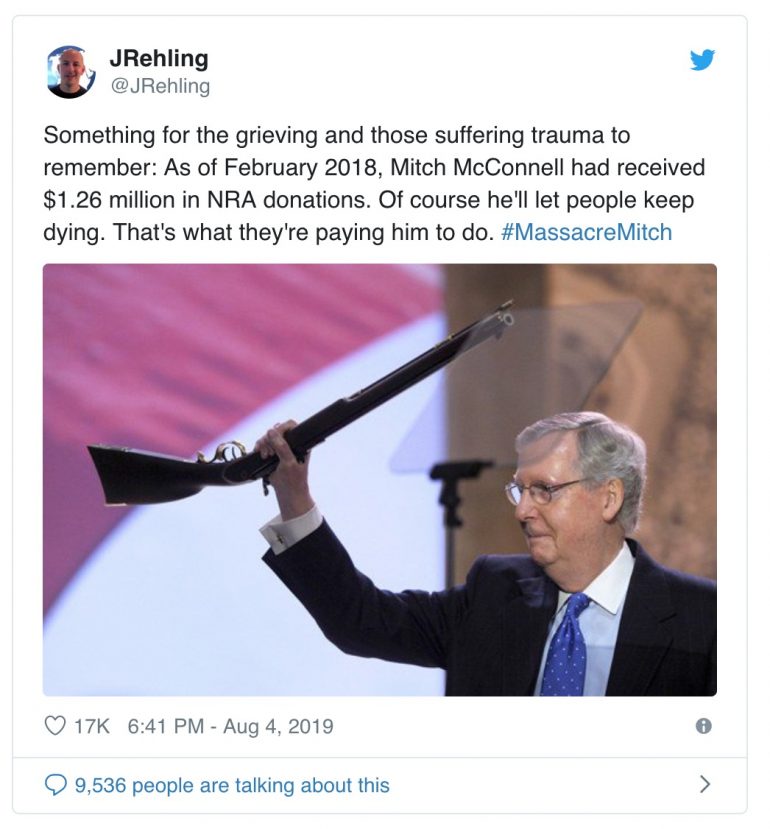 What did Newsweak and the gun-grabbing left who claim THEY care but others don’t conveniently fail to report? They failed to mention this: Democrats reject push to alert ICE when illegal immigrants fail firearm background checks

If the official Press narrative will be that Republicans are putting the Second Amendment [ie: a Constitutional right to protect yourself from threats] ahead of public safety [as though the Second Amendment itself wasn’t directly related to personal and community safety], isn’t the obvious counter-narrative that Democrats are putting the ‘rights’ of people who have illegally entered the country WELL ahead of the personal safety and well-being of the community at large?

At least Republicans are trying to find a reasonable balance between good objectives that are in tension.

What possible justification do you give for blocking an illegal alien caught trying to acquire a firearm from being reported to ICE?

Is it because they don’t want to upset their liberal donors and offend their billionaire ‘philanthropists’?

Returning to the original point — all this one-sided censorship and the political ramifications – directly interfering with the top Republican Senator’s re-election campaign is a REALLY short-sighted idea, considering the fact that Trump and the Senate have already been probing into Big Tech’s dangerously corrupting influence in the political process.

Especially since Trump himself is reported to have been mulling an Executive Order.

“If the internet is going to be presented as this egalitarian platform and most of Twitter is liberal cesspools of venom, then at least the president wants some fairness in the system,” the White House official said. “But look, we also think that social media plays a vital role. They have a vital role and an increasing responsibility to the culture that has helped make them so profitable and so prominent.” Politico

Here’s a recap of some of the many related big tech dangerous political influence stories (and it’s not just Republicans):

— Leftists Want A ‘New Civil War’ – This Post Is Disturbing
— Congressional Testimony: Google Gave Hillary Millions Of Votes, 15 Million More At Risk in 2020 (Video)
— Democratic 2020 Hopeful Suing Google $50M For Election Interference
— Cry-Bullies: Anatomy Of A Social Media Shakedown — And What We Can Do About It
— Twitter’s Attempt To Shut Down New Pro-Life Movie Backfired… Big-Time
— Hey Twitter: Why Did You Censor Accounts Remembering This Massacre In China?
— Apple’s Founder Warns Peeps To LEAVE Facebook – Will They Listen?
— Facebook’s Co-Founder Says It’s Time To BREAK UP Facebook – ‘It’s Dangerous’