There has been endless speculation about what ‘really’ goes on in the White House when advisors with different points of view come into conflict.

John Bolton has a reputation as being a ‘Hawk’ with opinions just as strong as the President himself and despite what looked like a strong beginning, they are now sufficiently far apart that they cannot continue in their relationship.

And so, Bolton’s role has now come to an end. 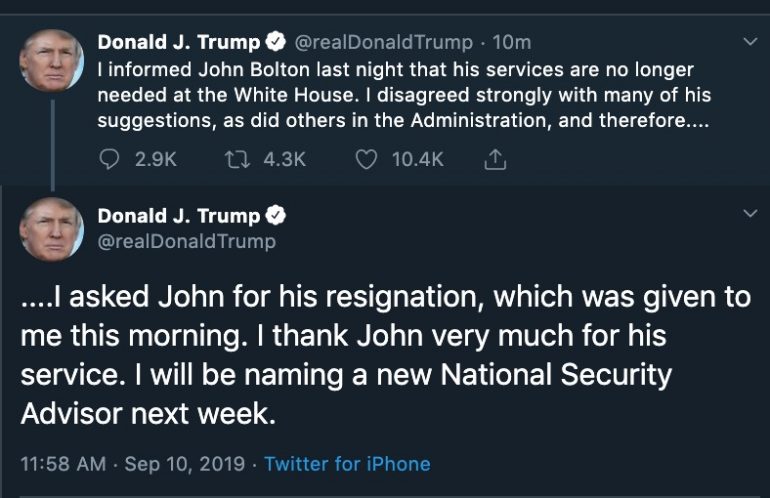 I informed John Bolton last night that his services are no longer needed at the White House. I disagreed strongly with many of his suggestions, as did others in the Administration, and therefore…

…I asked John for his resignation, which was given to me this morning. I thank John very much for his service. I will be naming a new National Security Advisor next week.

“I offered to resign last night and President Trump said, “Let’s talk about it tomorrow.”

These are, obviously, now, two differing accounts of what happened in Bolton’s departure and what those circumstances really look like.

There will be plenty of armchair quarterbacks popping up to suggest what, exactly precipitated this break in the relationship.

Speculation has already begun — is it related to the aborted Camp David meeting? Is it related to open disapproval of the President’s decisions after they had been made? Is it his reputation for ‘Hawkish-ness’? Or how he was perceived by other nations?

Is there something else? Who knows, really?

Bret Baier reports that Bolton has been falling out of favor in recent weeks, and has even been excluded from some recent meetings.