Both ladies were spotted wearing a shirtdress and shades. Who wore it better?

First Lady Melania Trump loves a chic, belted shirtdresses that she wears with simple flats and a pair of shades. She wears them pretty frequently.

Recently, Hillary was spotted copying her look… well… sort of. Not only did she not pop the collar, but she skipped the belt and donned a sunhat that looked almost like a bonnet.

The photo of Hillary out and about in the Hamptons suddenly reminded me of the Tina Fey and Amy Poehler as Sarah Palin and Hillary Clinton opening back in 2008 where Palin called Hillary “cankles.” Oh, yes, it made me long for the days of the ubiquitous pantsuit.

Hillary Clinton had a relaxing day catching up with a friend on Monday as she continues to enjoy the last days of summer in the Hamptons.

The 71-year-old former secretary of state and her pal were seen taking a stroll near Amagansett Square, a shopping and dining area in Amagansett, New York.

Hillary looked like she was in vacation mode in her striped shirt dress, which she paired with a sporty white sunhat and dark sunglasses.

So, why did Hillary ditch the pantsuit?

Maybe she’s following the lead of the First Lady. She wouldn’t be the only one to do that. 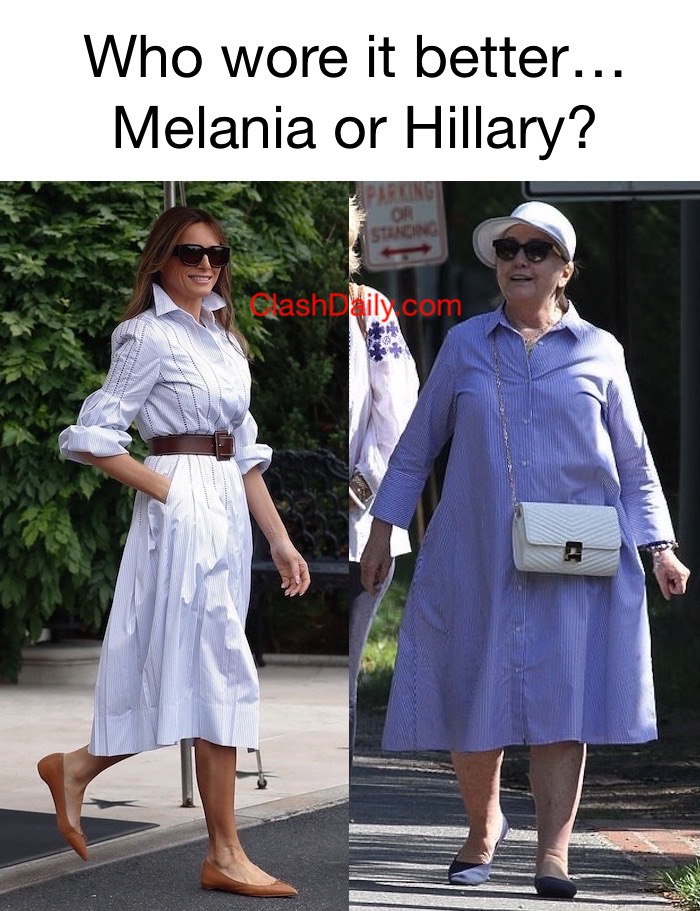 It might not be fair, but we’re gonna do it anyway.

The Media(D) isn’t exactly “fair” in their coverage of the First Lady, so why pull punches? The left will continue to attack Melania just because of who it was that she married, but they give Hillary a free pass on that front? Puh-leeze.

Besides, the same Media(D) that refuses to put the elegant First Lady on the cover of fashion magazines have put Hillary on those covers. So, let’s see who is the real fashion icon, shall we?