Hoo-boy! Someone is going to be in trouble for this one!

Hot on the heels of the tweet praising Mao Zedong, the social media guru at the New York Times fails again.

On the 18th anniversary of 9/11, The New York Times tweeted a link to an article remembering the victims of the terrorist attack. But because it’s the New York Times, and quite frankly, the “Gray Lady” just ain’t what she used to be, the tweet did not include the actual cause of the attack — Islamic terrorism.

The tweet was up for just over an hour this morning.

“18 years have passed since airplanes took aim and brought down the World Trade Center. Today, families will once again gather and grieve at the site where more than 2000 people died.” (Emphasis added) 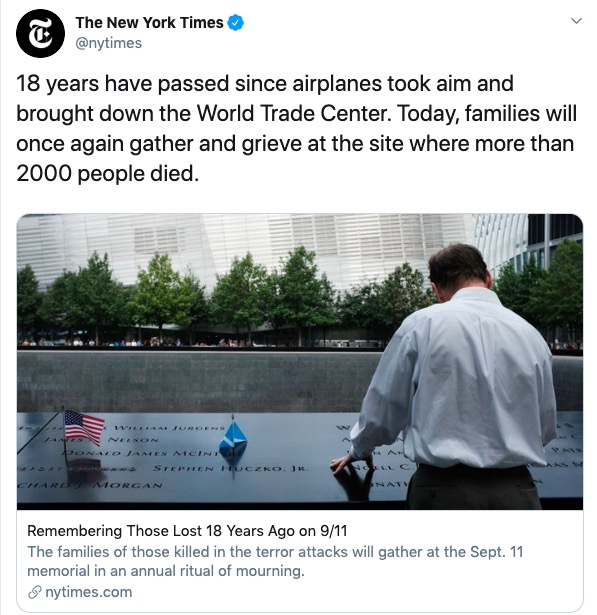 Are you kidding me?

Who wrote this, Rep. Ilhan “Some People Did Something” Omar(D-MN)?

They issued a notice that the tweet was deleted.

We've deleted an earlier tweet to this story and have edited for clarity. The story has also been updated.

The blasting that they received from Twitter users likely prompted the move. There were NO positive comments on a 9/11 memorial post. That’s gotta be some kind of record.

Some planes did something

Glad to know whoever wrote this is going to have to write a retraction and brought more attention to Muslim terrorism in the process.

These guys need to learn a new career because journalism isn’t cutting it for them. Any suggestions? Airplanes piloted by ….

Damn! This is how you honor the dead? The planes killed them?

Who owns New York Times? The choice of words clearly a deliberate move to rewrite history, to lighten the gravity of it… aimed at the younger generation so they will not know the real story. Which part of #NeverForget911 did they not get? ???

We should have seen it coming after all those planes attacked Pearl Harbor.

Ban planes. My God, the NYT is an embarrassment.

Airplanes took aim? The once trusted NYT's isn't good enough now for puppies to pee on!

Careful! That “Learn to code” aimed at “journalists” could get you suspended from Social Media(D).

These Media(D) people are the ones that decide what is and is not news. Frankly, they don’t report the news anymore, they editorialize it and cry and whine when they’re called “Fake News.”

They also push back against conservative outlets like ClashDaily that dare to do the same damned thing that they do — except for the fact that we are open about it. Actually, it might be the openness that they are objecting to.

You wouldn’t want a world where all you get is leftism shoved at you, would you?

ClashDaily has set up an outpost behind enemy lines after our main page was deleted. If you’re still on Facebook, check out our new ClashBriefing page.