Hold up — aren’t these the same dopes who routinely denounce Trump as some sort of a dangerous totalitarian? Seriously guys, WTF?

Saying they ‘lost the plot’ doesn’t even BEGIN to describe what happened here.

The New York Times took a moment to recognize the anniversary of Mao Zedong’s death 43 years ago. But the WAY they remembered him raised some eyebrows … and red flags.

(No, not THAT kind of red flags, either.)

The news seemed a little bit too — celebratory — of a man who crushed so many lives under the heel of his boot. 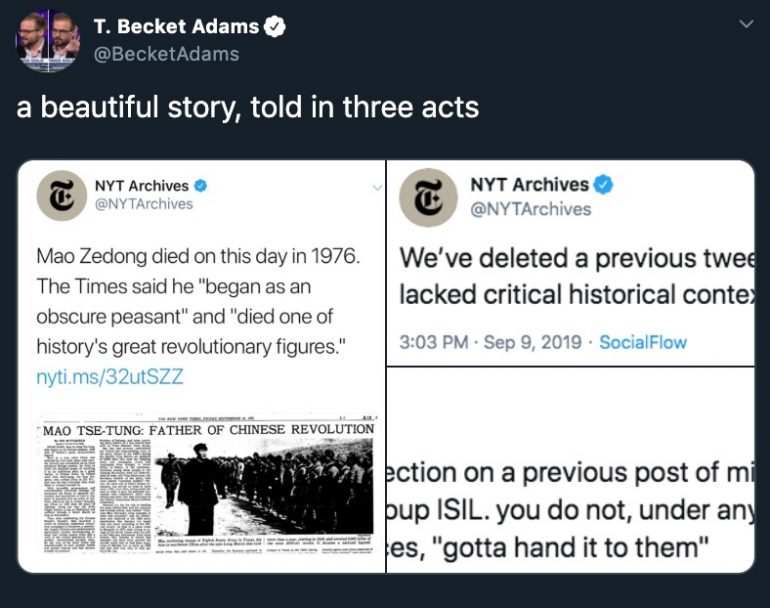 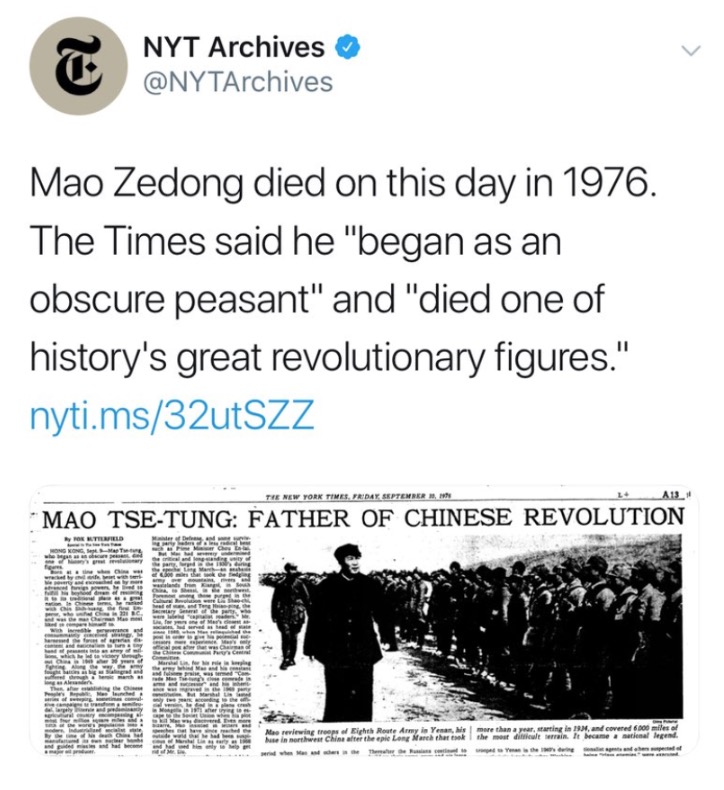 “Mao Zedong died on this day in 1976,” the Times archive’s Twitter account said in a since-deleted note published on social media. “The Times said he ‘began as an obscure peasant’ and ‘died one of history’s great revolutionary figures.’”

…It was not long before social media users noticed and took exception on Monday to the Times’ weirdly glowing description of the 20th century’s most prolific mass murderer. The pushback became such that the paper deleted the tweet eventually, issuing a sort of half-hearted mea culpa.

Which is to say, ‘Ah, yes. The murders. We forgot about the murders.’
Source: Washington Examiner

Shades of the old joke ‘but other than that, Mrs. Lincoln, what did you think of the play?’ — Except the joke was and is the New York Times itself.

What ‘murders’ did the Times forget to mention in celebrating yet ANOTHER mass bloodletting in ANOTHER communist utopia?

Mao Zedong, founder of the People’s Republic of China, qualifies as the greatest mass murderer in world history, an expert who had unprecedented access to official Communist Party archives said yesterday.

Speaking at The Independent Woodstock Literary Festival, Frank Dikötter, a Hong Kong-based historian, said he found that during the time that Mao was enforcing the Great Leap Forward in 1958, in an effort to catch up with the economy of the Western world, he was responsible for overseeing “one of the worst catastrophes the world has ever known”.

Mr Dikötter, who has been studying Chinese rural history from 1958 to 1962, when the nation was facing a famine, compared the systematic torture, brutality, starvation and killing of Chinese peasants to the Second World War in its magnitude. At least 45 million people were worked, starved or beaten to death in China over these four years; the worldwide death toll of the Second World War was 55 million.
Source: Independent

Then again, what do we REALLY expect from a newspaper that failed to report what they knew about the Nazi Death camps, and whose Soviet correspondent covered up the atrocities of Joseph freaking Stalin? He got a Pulitzer for telling us the Holodomor (the engineered ‘Famine-Genocide’ of perhaps 4 Million Ukrainians) didn’t actually happen.

(One might almost imagine the Climate Change zealots celebrating such an aggressive reduction in large numbers of human population.)

But those of us who see human lives as having infinite intrinsic worth, refuse to think of such bloodthirsty regeimes — or the ideas that drive them — a anything more than a dangerous virus which occasionally threatens the body politic.

A virus which requires aggressive treatment.

Socialism — or ANY of its bastard political variants — is a corrosive ideology that cannot help but destroy the very people it promises to help. It’s not a bug, it’s a feature.