Was there anything honest in the reporting of this non-troversy?

The New York Times has been lambasted for running a piece which attempts to smear Supreme Court Justice Brett Kavanaugh a year after his contentious confirmation. The essay was an excerpt from a book about Brett Kavanaugh and the allegations against him. It was written by Robin Pogrebin and Kate Kelly, two columnists for the Times.

The article, in an attempt to bolster the claim by Deborah Ramirez that a drunk Brett Kavanaugh waved his penis in front of her face, alleged that an unknown individual shoved said penis into the hand of a woman during a different college party. It’s a bizarre claim on many levels — Kavanaugh had his penis exposed, he was not the one to initiate the contact, the basic physical logistics of this alleged act, and that the person who brought the claim forward was Max Stier, a former Clinton attorney that worked on the defense team during the Lewinsky scandal opposite Kavanaugh. Stier’s Clinton connection was not mentioned in the book. But still, that’s not the strangest exclusion — neither Stier nor the woman who was the alleged victim spoke to the authors or the NY Times, and, according to many friends, the woman does not recall the incident.

There have been deleted tweets, corrections, and a whole lot of backpedaling by the NYT and the authors.

The New York Times, in what has become routine for its social media team, had to delete a tweet and issue a correction regarding the Kavanaugh story. 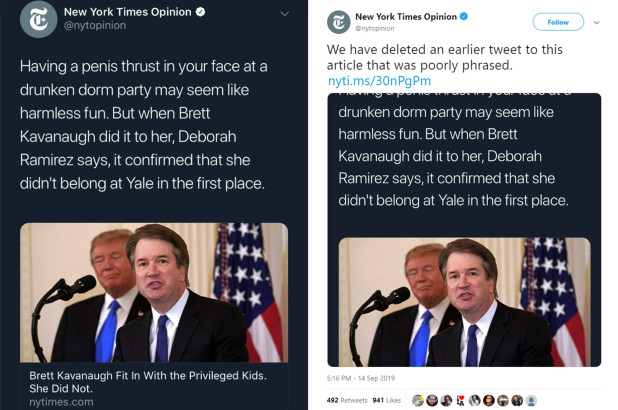 They then deleted that tweet and issued a new one with just an apology. 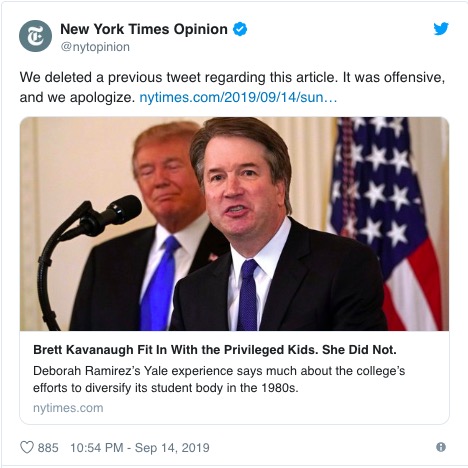 Robin Pogrebin and Kate Kelly appeared on The View to discuss the book and the controversy of the essay that was published in the Times.

Can you believe that Pogrebin actually said that part of the purpose of the book was to paint Kavanaugh in a positive light?

If that was the goal, the excerpts aren’t doing such a great job of that.

Then again, they also said that they managed to “corroborate” the allegations against Kavanaugh by Christine Blasey Ford and Deborah Ramirez.

Really? Which version of Ford’s claim? She changed her story several times. And as for the Ramirez claim… well, they got that wrong, too.

Mollie Hemmingway, Senior Editor of The Federalist, Fox News contributor, Senior Journalism Fellow of Hillsdale College, and co-author (with Carrie Severino) of the bestseller about the Kavanaugh confirmation, Justice on Trial: The Kavanaugh Confirmation and the Future of the Supreme Court, noticed some glaring errors and omissions in the book by Pogrebin and Kelly.

In a piece yesterday, Hemmingway states that The Atlantic published a piece with an excerpt from the Pogrebin and Kelly book with yet another glaring error.

A new Atlantic-published, adapted excerpt of the book attempts to resurrect Pogrebin and Kelly’s anti-Kavanaugh smears but once again has a major error. “We Spent 10 Months Investigating Kavanaugh. Here’s What We Found” was published in the Atlantic.

Their reporting must not have been thorough. In a section explaining why they believe the accusers despite the lack of any evidence, they write that their emotional reaction to the claims was that the claims rang true. But they get major facts wrong:

Using Martha’s common-sense test, the claims of Deborah Ramirez, while not proven by witnesses, also ring true to us. Ramirez, who was a Yale classmate of Kavanaugh’s, said he drunkenly thrust his penis at her during a party in their freshman-year dormitory, Lawrance Hall. The people who allegedly witnessed the event—Kavanaugh’s friends Kevin Genda, David Todd, and David White—have kept mum about it. Kavanaugh has denied it. If such an incident had occurred, Kavanaugh said, it would have been the “talk of campus.”

Hemmingway then explains that the original New Yorker article by Ronan Farrow and Jane Meyer with Debbie Ramirez’s allegation did have several individuals come forward to Kavanaugh’s defense.

One of the male classmates who Ramirez said egged on Kavanaugh denied any memory of the party. ‘I don’t think Brett would flash himself to Debbie, or anyone, for that matter,’ he said. Asked why he thought Ramirez was making the allegation, he responded, ‘I have no idea.’ The other male classmate who Ramirez said was involved in the incident commented, ‘I have zero recollection.’

In a statement, two of those male classmates who Ramirez alleged were involved in the incident, the wife of a third male student she said was involved, and one other classmate, Dan Murphy, disputed Ramirez’s account of events: ‘We were the people closest to Brett Kavanaugh during his first year at Yale. He was a roommate to some of us, and we spent a great deal of time with him, including in the dorm where this incident allegedly took place. Some of us were also friends with Debbie Ramirez during and after her time at Yale. We can say with confidence that if the incident Debbie alleges ever occurred, we would have seen or heard about it—and we did not. The behavior she describes would be completely out of character for Brett. In addition, some of us knew Debbie long after Yale, and she never described this incident until Brett’s Supreme Court nomination was pending. Editors from the New Yorker contacted some of us because we are the people who would know the truth, and we told them that we never saw or heard about this.’

So, the witnesses to the alleged Ramirez incident, including those she claimed were involved have denied the claim and the esteemed NYT columnists, Robin Pogrebin and Kate Kelly didn’t see fit to include that in their book.

That must be an oversight, right?

Mollie Hemmingway has called for The Atlantic to issue a correction for the omission and says that her article in The Federalist will be updated once they have done so.

This isn’t just a smear against Kavanaugh — it’s a warning from the Media(D) to the GOP that the same thing will happen if another opportunity to confirm a Supreme Court Justice comes up with a Republican President.

It’s the same thing that the #Resist crowd is doing because they don’t like the result of the 2016 Presidential election.