It looks like Robert Francis O’Rouke found another “right” that our Founders must have overlooked.

In recent years, our friends on the left have spotted some “rights” that were not enshrined in our founding documents.

To that list, you can add “living close to work” according to Mr. O’Rourke in a recent campaign stop. 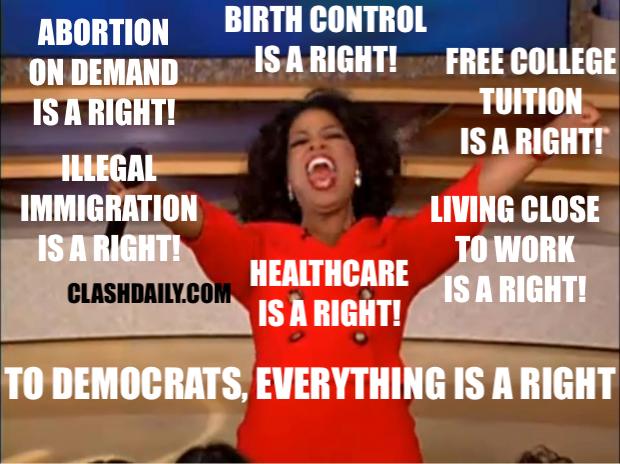 Geez, looks like rights are just popping up out of thin air!

O’Rourke proposed “smart cities” to improve the quality of life and battle climate change. Those “smart cities” would include “mixed-income housing” to integrate an America that has been (allegedly) sharply divided by socioeconomic status. (More on the “allegedly” below.) The urban centers would also include high-speed rail and transit for those who don’t have cars or choose not to use them in order to “reduce the impact on climate change and greenhouse gas emissions.”

Beto explains in a video posted to Twitter which was captioned, “Living close to work shouldn’t be a luxury for the rich. It’s a right for everyone.”

But a right that requires government intervention to ensure? Not so much.

If you think that calling a short commute a “right” is bad, just wait until you see his proposal to ensure that this new “right” is protected.

Here’s a hint: it requires that the government exert its will on the public.

“Here’s a tough thing to talk about, though we must. Rich people are going to have to allow, or be forced to allow, lower-income people to live near them,” said O’Rourke. He continued, “We force lower-income, working Americans to drive one, two, three hours in either direction to get to their jobs, very often minimum wage jobs.”

Living close to work shouldn't be a luxury for the rich. It's a right for everyone. pic.twitter.com/lohRdoFGrH

Question: Who commutes 6 hours for a minimum wage job?! That doesn’t seem to be particularly cost-effective.

Brad Plumbo at the Washington Examiner published an article yesterday that shows that the income gap isn’t as bad as Bernie Sanders, Elizabeth Warren, and all the other far-left Democrats have claimed. That info comes right from the Census Bureau.

Yet new data show the liberal narrative surrounding income inequality has been exaggerated and is unfounded. The U.S. Census Bureau just released new statistics which show that the Gini coefficient, a common measure of income inequality, has hardly changed in the last 25 years.

What’s more, a 2018 academic paper sent shockwaves around the academic community when it showed that the gap in income equality has risen “nowhere near as much as alleged.”

Why let little things like facts get in the way of a good narrative, right?

Speaking of facts, it seems that Beto has forgotten his own history.

Tristan Justice over at The Federalist pointed out that (surprise, surprise) Beto is a great, big, giant hypocrite on this new “mixed-income housing” strategy.

While touting his plans to spend federal dollars on integrating socioeconomic classes, O’Rourke once endorsed plans to do the exact opposite, pushing poor people out of their homes in El Paso further away from the wealthy.

As an El Paso City Council member in 2006, O’Rourke voted to advance a real estate deal to redevelop downtown El Paso, which caused residents of a historic Mexican American neighborhood he represented to worry they would lose their homes through eminent domain. O’Rourke was also married to the investor’s daughter, who was pushing for the deal.

So, the economically disadvantaged are movin’ on up…

…or, getting shoved out…

…depending on what fits Beto’s political ambitions at the moment.

Remember, this is the same guy that can find the “right” to live close to work but wants to confiscate AR-15s in a mandatory “buyback” despite this little thing called the Second Amendment.

I was asked how I'd address people's fears that we will take away their assault rifles.

I want to be clear: That's exactly what we're going to do. Americans who own AR-15s and AK-47s will have to sell their assault weapons. All of them. pic.twitter.com/YbnSsz3bVy

What a piece of work this guy is!

No wonder this guy is polling at 2% in the primary.

It’s the way that he speaks that should really bother freedom-loving Americans.

Beto’s campaign banned Breitbart’s Senior Editor-at-Large, Joel Pollak, from a campaign event recently because of his “previous hateful reporting.” They claim that he was disruptive, but Pollak denies the claim.

It all seems a bit authoritarian to me.

It’s kind of like the thing that they’re always accusing President Trump of doing. Even though I don’t like the idea of banning any reporters from access, the reporters that the Trump administration has barred from the White House had been because of their own individual actions.

Beto also wants you to hand over your AR-15s to the government in a mandatory gun confiscation program under the guise of a “buyback.”

He wants to forcibly integrate people in some sort of federally-imposed mixed-income housing plan.

Perhaps he didn’t learn from recent dust-up over forced busing when Biden was taken to task by Kamala Harris — busing actually increased the racial disparities in schools.

The same would happen in cities.

Individuals like to make individual choices and not have them forced upon them by the government.

Even if it means a longer commute.