Vice President Mike Pence just announced that the United States has negotiated a ceasefire with Turkey.

The Trump administration has been lambasted by, well, everyone for the handling of the situation in Syria. They have been criticized by both the right and the left for abandoning the Kurdish allies in northern Syria.

Cards on the table: I’m not a fan of President Trump’s policy to withdraw troops from Syria, either. Though I’m also not keen on having U.S. troops in Syria indefinitely. But I’m also not the President of the United States and I don’t get to make those calls. (Thank God!) Yesterday, Trump was on the receiving end of a bipartisan smackdown in the House of Representatives when a motion to condemn the withdrawal of troops from northeast Syria was adopted 354 to 60.

The strategy of withdrawal is debatable, but let’s be fair, the situation between the Kurds and Turkey is quite complicated. That Trump wanted to get American troops out of the region with a historic conflict isn’t a surprise, especially since the continued presence of U.S. troops after the defeat of ISIS was only to protect the Kurds.

The other wrinkle would be if the United States got involved in the conflict. Either decision would put the United States between a rock and a hard place — it would mean turning on Kurdish allies that helped defeat ISIS and allying with a rather problematic Turkish regime or turning against Turkey, a NATO ally, and attacking a religious and ethnic minority in Syria.

The Daily Mail ran a long-winded, defeatist headline trumpeting how futile the meeting between Vice President Pence, Secretary of State Mike Pompeo, and Turkish President Recep Erdogan was going to be. 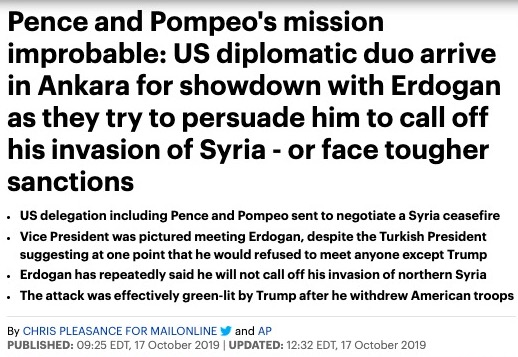 The hopeless headline isn’t much of a surprise. Yesterday, CNN reported that Erdogan said that a ceasefire was not something that he would even consider.

Turkish President Recep Tayyip Erdogan has dismissed US calls for a ceasefire in northern Syria and said that he’s not worried about American-imposed sanctions, or the advancement of Russian-backed Syrian forces toward the Turkish border.

Vice President Pence announced that there would be a 120-hour ceasefire to allow the Kurds to retreat. The Syrian Democratic Forces (SDF) — ie. the Kurds in Syria will be pull troops from the border and dismantle their defensive fortifications near the Turkish border.

“Today the United States and Turkey have agreed to a ceasefire in Syria,” Pence told a news conference after more than four hours of talks at the presidential palace in Ankara.

Pence had flown to Turkey to call for a halt in Turkey’s cross-border military operation, called Operation Peace Spring, under which Turkey has aimed to clear YPG Syrian Kurdish fighters from a 20 mile (32 km) deep “safe zone” along the border.

Pence said that the Turks will “pause” Operation Peace Spring to allow YPG forces to withdraw from the safe zone for five days, and once a complete withdrawal has been done, the military operation will be halted entirely.

The U.S. did not support Turkey’s military’s action against the Kurds and imposed sanctions because of it.

The Vice President gave credit to President Trump and to President Erdogan and the “strong relationship” between the United States and Turkey.

Vice Pres. Pence: "I know the president is very grateful for Pres. Erdogan's willingness to step forward and to enact this ceasefire and to give an opportunity for a peaceful solution of this conflict that commenced one week ago." https://t.co/o4UjO7BtjE pic.twitter.com/ig9b7mv9GA

Great news out of Turkey. News Conference shortly with @VP and @SecPompeo. Thank you to @RTErdogan. Millions of lives will be saved!

This deal could NEVER have been made 3 days ago. There needed to be some “tough” love in order to get it done. Great for everybody. Proud of all!

This is a great day for civilization. I am proud of the United States for sticking by me in following a necessary, but somewhat unconventional, path. People have been trying to make this “Deal” for many years. Millions of lives will be saved. Congratulations to ALL!

Later, he said, “It’s really a great day for civilization.”

President Trump on the U.S. and Turkey reaching a ceasefire in Syria: