He even has a ready answer for the ‘but what about racist speech’ question. And if someone could explain it to the Social Media eternal outrage mobs, that would be great.

Of course, explaining free speech to that crowd might require a set of crayons.

Dave Chappelle is everything a funny guy should be. He has an ability to size up culture and reframe it in a transgressive way that will make the audience laugh AND think.

This is exactly the role satire is supposed to have in society. Public ridicule is the corrosive cure to sacred cows hiding in ivory towers. And because he’s really good at that sort of transgressive humor, he won himself an award, the Mark Twain Prize for American Humor.

So, what happened when he stood up to accept his award? He kicked over some more sacred cows.

Do you remember that impression he did of cancel culture in his Netflix special? The one with the punchline saying, ‘That’s YOU’? Well, he picked up where he left off on that point.

The 46-year-old stand-up comedian received the accolade at the John F. Kennedy Center for the Performing Arts in Washington, D.C. He went off-the-cuff while accepting the award onstage, USA Today reports.

“(I) don’t get mad at ’em, don’t hate on ’em,” he said while discussing comedians he knows to be racist. “Man, it’s not that serious. The First Amendment is first for a reason. Second Amendment is just in case the First one doesn’t work out.”

“Political correctness has its place,” Chappelle told reporters on the red carpet (via The Hill). “We all want to live in a polite society, we just kind of have to work on the levels of coming to an agreement of what that actually looks like.”

“I, personally, am not afraid of other people’s freedom of expression. I don’t use it as a weapon. It just makes me feel better. And I’m sorry if I hurt anybody,” the comedian added. “Yada, yada, ‘everything I’m supposed to say.”
Source: FoxNews 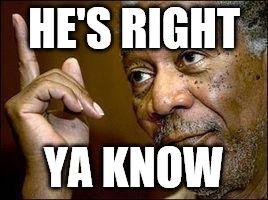 He’s a comic, so he’s going to have unconventional ways of saying things. That’s LITERALLY his JOB.

But his point is right on target.

And the fact that he lit up a smoke on stage dared anyone to do something about it made the whole thing just *that* much funnier.

The left just does NOT know what to do with this guy. They just can’t push him into any of their tidy little boxes. He refuses to let them.

WATCH: Dave Chappelle’s Netflix Special Exposes The LIE Of ‘My Body, My Choice’

DAVE CHAPPELLE: Defends Donald And Drops The HAMMER On Hillary