David Frum isn’t your regular Never-Trumper. A quick look through his timeline shows he absolutely LOATHES him.

And whenever there’s an opportunity to attribute the worst and most cynical possible motives to any Trumpian behavior, he can be reliably counted on to jump to that conclusion.

His angry animus and assumptions about Republicans could NEVER lead him astray, though… right?

Actually… some of us haven’t forgotten THIS black stain on his history.

I noticed your magazine was named in the letters from the attorneys representing the Covington Catholic school boys you slandered.

Here is to hoping they get a healthy pound of flesh from your organization.

By contrast, his outrage is selective and partisan by his own admission. 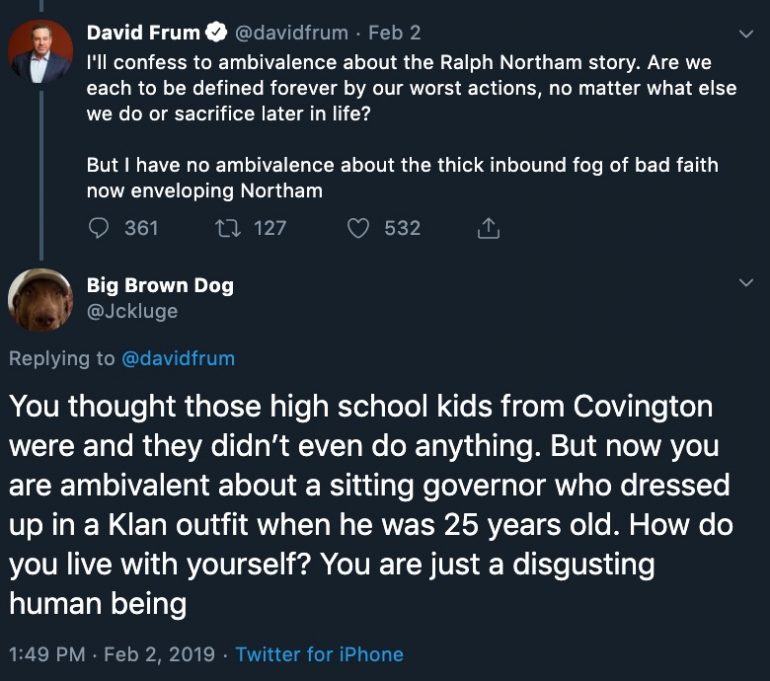 With respect to Northam, our outrage wasn’t bad faith. We objected to (1) his position on infanticide and (2) the ‘pass’ he got that stands in stark contrast to anyone with a red hat or an (R) after their name, as echoed in the answer to his tweet, above.

By comparison, only six months earlier Frum rushed to judgment assuming Kavanaugh’s guilt… and joining his voice to the chorus.

The Kavanaugh defense was not

"Yes, I drank too much in my last year of high school and first year of college, misbehaved in ways that embarrass me now, I am sincerely sorry, and have never done anything like it since."

His defense was: It's all lies, every word.

His more recent Tweets feature openly unfounded speculation against Trump which he doesn’t even pretend to have any supporting evidence to back up.

Has his hate blinded him so badly that he’s forgotten that even MUELLER said NO Americans were found to have cooperated in any way with Russian efforts to tamper with the election? 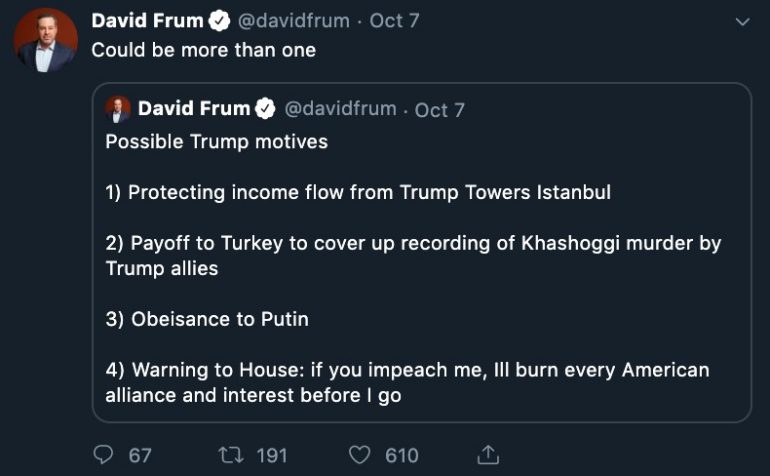 Fun game, David, by the way, did you happen to pick up a copy of Peter Schweizer’s  ‘Clinton Cash’? Probably not, otherwise, how would you possibly have made the silly statement you recently made on MSNBC?

Frum’s partisanship led to an accusation he made on MSNBC’s aggressively ridiculous AMJoy program where he made sure he would say something suitably outlandish.

Presidential families should behave themselves in more circumspect way. But the Trump family is so far and away the most corrupt in American presidential history, that you really can’t think of who’s in second place.” Source: Grabien

Well, just off the top of my head — and without the easy cop-out of pointing to Obama’s various violations, or the compelling case for Clintononian pay-for-play — how about the Camelot family itself? The Kennedys?

JFK brought an East German Spy (Ellen Rometsch) to his bed. There was a 60 Minutes story making a claim that Mafia Muscle helped him win an election. His brother once left a woman for dead in Chappaquiddick. The sexualizing of JFK’s female staffers makes Slick Willy look positively monkish by comparison.

Whether it was the mafia’s handiwork or no, the election of the Left’s beloved JFK was tainted.

Earl Mazo, a Washington reporter for the New York Herald Tribune, began his investigation after he said Chicago reporters were “chastising” him and other national reporters for missing the real story.

He traveled to Chicago, obtained a list of voters in the suspicious precincts, and began matching names with addresses. Mazo told The Washington Post:

There was a cemetery where the names on the tombstones were registered and voted. I remember a house. It was completely gutted. There was nobody there. But there were 56 votes for [John F.] Kennedy in that house.
Source: Newsweek