When the death of a fierce political rival was announced, the party of Abraham Lincoln kept it classy.

Though Republicans had often crossed swords with Elijah Cummings in feisty political exchanges, the announcement of his death was received with sorrow.

Representative Elijah Cummings, of Baltimore, died early Thursday at the age of 68, his office said. Cummings passed away at Johns Hopkins Hospital at 2:45 a.m. from “complications concerning longstanding health challenges,” his office said.

…House Speaker Nancy Pelosi ordered the flags at the Capitol to be flown at half staff in his memory. The White House, too, lowered its flag.
Source: CBSNews

Others will recount his many accomplishments and place is history, as they should. We will note something else about his passing.

As divided as we are, it is STILL possible to be gracious to those with whom we fight.

Mark Meadows was counted among Cummings’s friends, and responded to the news of his death this way:

There was no stronger advocate and no better friend than Elijah Cummings. I am heartbroken for his wonderful family and staff—please pray for them.

I will miss him dearly.

Trump — who has had some feisty exchanges with Cummings not so long ago tweeted this in his memory:

My warmest condolences to the family and many friends of Congressman Elijah Cummings. I got to see first hand the strength, passion and wisdom of this highly respected political leader. His work and voice on so many fronts will be very hard, if not impossible, to replace!

My warmest condolences to the family and many friends of Congressman Elijah Cummings. I got to see first hand the strength, passion and wisdom of this highly respected political leader. His work and voice on so many fronts will be very hard, if not impossible, to replace!

And this is part of a longer Twitter thread by Trey Gowdy that is well worth reading. 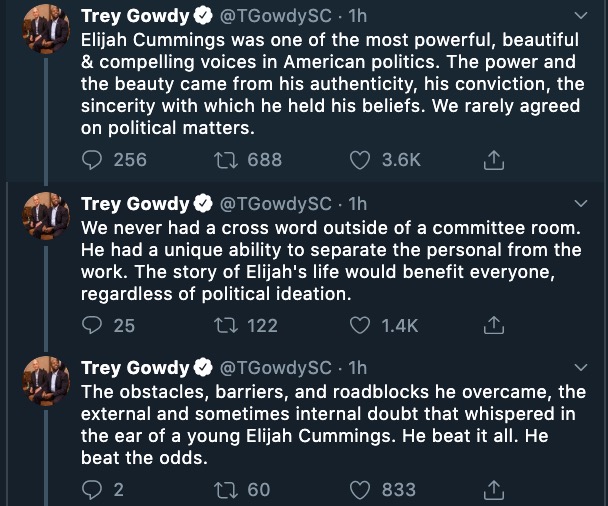 It’s one thing to fight like hell over ideas and governance of the nation. But at the end of the day, we’re all human and would do well to keep that in mind.

We are the party of Lincoln, are we not? And did he not leave the following words as part of his legacy?

“We are not enemies, but friends. We must not be enemies. Though passion may have strained, it must not break our bonds of affection. The mystic chords of memory will swell when again touched, as surely they will be, by the better angels of our nature.”

Of course he did.

That is why I am pleased to say that when Judge Ginsberg had a health scare, we wished her a full recovery.

When Bernie had heart troubles, we drew a clear distinction between our contempt for his policies and our interest in his well-being and recovery.

It is why we ought not let our political divisions drive us to petty reactions to the death of a rival… however deeply we may disagree.

The kindness does get noticed — at least by some.

It might even help us to see our old conflicts in a different light. For example, remember the political dust-up over Baltimore last summer? The conclusions that had been jumped to didn’t account for all the facts. What some touted as evidence of Trump’s ‘racism’ was, in fact, Trump’s direct response to the plea of a Black activist:

WATCH: Here’s What We ALL Missed About Trump’s Baltimore ‘Scandal’ … Someone Tell CNN

If we lead the way on this, maybe people will see the difference between this and the ghoulish glee shown at, for instance, the death of David Koch, or the hospitalization of Rand Paul.