Is that supposed to be a threat, Senator “Jazz Hands”?

On Sunday, Sen. Cory Booker(D-NJ) appeared on CNN while he was on the campaign trail and staunchly defended former Vice President Joe Biden against criticism of his son’s business connections in Ukraine. He accused the President of engaging in “moral vandalism” that should be offensive to Americans.

Booker has been trying to make “moral vandalism” a slogan of some sort for some time now. He’s called President Trump’s immigration policy “moral vandalism” and now questioning if Hunter Biden was being paid by a Ukranian energy company for access to the Vice President who was handling the Ukraine file for the Obama administration is also “moral vandalism.” 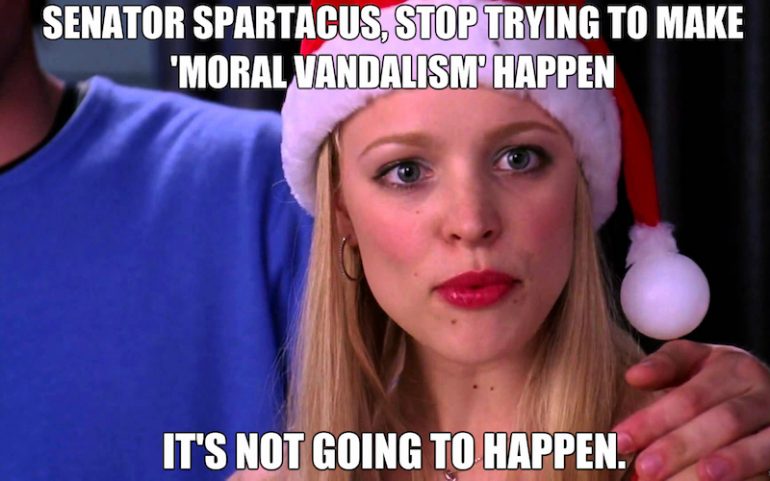 CNN’s Ana Cabrera began her question by stating that the President is “throwing out more baseless allegations” on Twitter and asks if Democrats should be uniting behind Joe Biden.  Booker responds attempting to inject emotion and outrage into his response.

CABRERA: Senator, the president has continued to throw out more baseless allegations against Joe Biden this weekend on Twitter. The former vice-president has now taken on the president directly in a new Washington Post op-ed, and he writes this. “Trump is frantically pushing flat out lies. The bunk conspiracy theories and smears against me and my family no doubt hoping to undermine my candidacy for the presidency, but it won’t work because the American people know me, and they know him.” To be clear, there is no evidence of wrongdoing by the former vice-president, or his son Hunter Biden, even the Ukrainian prosecutor has said as much. Senator, if the overwhelming issue for Democrats is President Trump must be defeated. Do you feel that you and other Democrats should be doing more to speak in one voice that Joe Biden’s family is off-limits?

BOOKER: No, I’ve said time and time again that this is unacceptable — that if you come after Joe Biden, you’re going to have to deal with me in this case. There is no — as you said — these are baseless, unfounded, scurrilous lies plain and simple, trying to undermine the character of one of the statesmen of our country, not our party, but our country and so yes, you’ve got a problem with me. I can’t speak for this in a political context. This is just me as an American to see these kind of attacks, and whether it’s the lies this president tells about Joe Biden or lies he tells about other American citizens to demean and degrade them. Hell, I found what he wrote about Mitt Romney to be absolutely unacceptable, assaulting another statesperson in our nation. And so this is a president that is demeaning and degrading. He is lying and deceiving, and there’s got to be some accountability and the fatigue of this country. There’s got to come a point that people just say enough is enough.

You know, we are a nation of virtue. We’re a nation where character matters and this president is engaging in a level of moral vandalism that has got to offend the sensibilities of all Americans. And so, yes, I’m sorry. I was taught by my parents — stand up for yourself but even more noble than that you should stand up for others who are being wrongfully attacked. And I don’t care if it’s one of his fellow Republicans Mitt Romney, or the character of Vice-President Joe Biden, it’s unacceptable, and he’ll have a problem with me and I will always speak out against those kind of scurrilous attacks especially from a coward who is showing the greatest type of weakness there is which is lies, deceptions and cowardness.

Maybe he plans on enlisting the aid of his imaginary tough-yet-sensitive drug-dealing friend, T-Bone to rough up the President.

Or perhaps T-Bone could connect with pomade-wearing “bad dude” Corn Pop and the pair would meet up with Biden and Booker have a dance-off against President Trump, AG Barr, Vice President Mike Pence, and Senator Lindsey Graham 2.0 just like in West Side Story.

It’s unclear what sort of consequence President Trump would face by bottom-tier Democratic candidate Booker for targeting one of the top-tier candidates.

Perhaps he should just keep quiet and send a Thank-you card.