Gee, what happened in 2016 that could have caused such a decline in donations?

A recent financial disclosure reveals that the Clinton Foundation raised $30.7 million in revenue according to the Form 990 tax return for 2018. This is the lowest figure posted by the charity since it raised $25.6 million in 2002.

In completely unrelated news, the foundation’s highest revenue year was 2009 where the charity raised a whopping $249 million. Coincidentally, this was also the first year of Hillary Clinton’s tenure as Secretary of State in the Obama administration. It seems that 2009 was a good year to bear the name Clinton.

The 2018 revenue is just 12 percent of what the 2009 revenue was. This is the third straight year of losses of more than $16 million for the charity, with a total loss of approximately $49.6 million since Hillary lost her bid to become President. 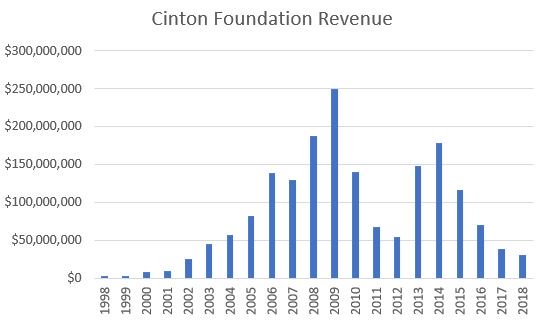 If it’s a philanthropic organization and donors believed in their efforts, why would revenue drop so drastically?

Or is it that the people donating were expecting special favors for their donation?

It’s long been alleged that the Clinton Foundation was a pay-to-play scheme and was used as a “slush fund” for the Clintons.

The FBI is currently investigating those claims.

In January 2018, reports surfaced of an FBI investigation into the Clinton Foundation to determine whether or not it engaged in illegal activities while Hillary Clinton was secretary of state surfaced.

In addition to the significant drop in donations, it appears that speaking fees billed through the Foundation have also dropped like a stone — down 90% from 2014 according to Open Secrets.

Maybe this is why Hillary keeps dropping those hints that she’s not ruling out running for President again — to gin up support for the Clinton Foundation again.

Perhaps we can look to the Media(D) for the answer to this mysterious drop in donations.