Let’s cover the ‘WHY’ question before we talk about the 4-letter words that Christians stop short of saying.

The lyrics from his song ‘Jesus Walks’ make the following claim, “So here go my single, dawg, radio needs this // They say you can rap about anything except for Jesus // That means guns, sex, lies, videotape // But if I talk about God my record won’t get played, huh?”

Radio-land — and culture generally — has been openly hostile to Christ. But how much of that is society’s fault, and how much is the Church’s?

We are seeing such unlikely figures as Kanye West, President Trump, and former Planned Parenthood manager and rising star, Abby Johnson (‘Unplanned’ movie) showing us that people CAN take a stand in defense of the truths to which Christianity holds.

So, why don’t we see more boldness like what they have shown us?

And before you go there, no… the ‘they have nothing to lose’ answer doesn’t quite cut it.

Trump and Kanye certainly both could have had a lot to lose by taking a solid stand for Christianity — more boldly than other politicians and musicians had.

Trump didn’t HAVE to go ‘all-in’ in, courting the Evangelical vote. The gains he would make there come at the expense of urban losses he’d feel elsewhere by taking a more ‘moderate’ track.

Ditto Kanye. He could easily have enjoyed a ‘private’ conversion without being so very VERY public about it, and risking his entire career with his fan base — who are notably UNfriendly to traditional Christian values. But he didn’t.

He had a radical conversion that led to a radically bold message.

Trump’s boldness may have come from a different direction, but he understands that he didn’t get to where he is by trading favors with financial benefactors who will be ready one day to call in their chips. If there is a difference in direction between himself and his party, he can tell his own party to pound sand if need be.

What about the rest of us? Do we cower in fear of what the world might do to us if we stand up and make our voices heard?

Jesus himself addressed that very question. In Matt 28, he said, “And do not fear those who kill the body but cannot kill the soul. But rather fear Him who is able to destroy both soul and body in hell.” Bold words. They are echoed in Rev 12:11: “And they overcame him by the blood of the Lamb, and by the word of their testimony; and they loved not their lives unto the death.”

We get wrapped up around the axle about concerns like becoming a social outcast, losing a job, or (gasp!) being cut off of social media. Jesus reframed the question in the largest terms our temporal life can grasp — death itself.

In so doing, Jesus reminded us that as catastrophic as that is in our understanding, there is an even bigger loss we can face that THEY have no power over and that this is actually the lesser loss.

So what are some of the 4-letter words that make Christians chicken out?

KING — People don’t mind Jesus as ‘a teacher’, one more moral guide whose teachings ‘some’ people like to follow. But when you call him KING, that puts him in a position above other people. In a position where knees will have to start bowing. And that makes a lot of people uncomfortable.

LORD — This is a lot like King, but it stretches further. Early Christians were killed for refusing to say the words ‘Ceasar is lord’ and dropping a pinch of incense into a flame indicating worship.

Jesus is occasionally called ‘savior’ in Scripture, but he is called LORD hundreds of times. Becuase he is LORD of all. That’s not just POLITICAL authority, but ULTIMATE MORAL authority as well.

HELL — Christians are afraid to mention Hell for some reason. But Jesus didn’t shy away from the topic at all, it was often featured in his parables, his teachings, and even the encouragement we mentioned earlier about the one thing the world cannot threaten us with.

The last one might surprise many of you. It is also one of the most important.

‘MUST‘ Why is ‘must’ such a key word? It makes a binary demand on someone. To agree is to submit, to disagree is to rebel. But a choice is demanded, and who are you to demand such a choice out of me? Who are you to question ‘my truth’?

Who are we to tell them? I’m glad you asked.

We have not come on our own authority.

We have come as ambassadors bearing a Timeless Message of the LORD and KING. He who was crucified yet conquered death and now holds the Keys to Death And Hell. He who upholds all things by the Word of His Power.

The message is simple. Profound. And it can be deeply offensive to those who have not yet bent the knee. But that message does not change to fit the whims of those who hear it. We have been sent by Jesus Christ to proclaim:

There is salvation in no one else, for there is no other name under heaven by which we must be saved. 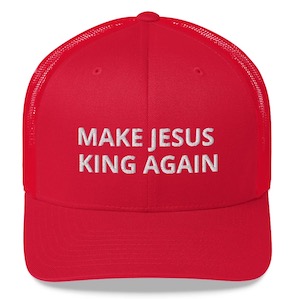