When Horowitz presented his IG report, the last piece of a puzzle Bongino was trying to solve finally snapped into place.

It all hinges on what else was happening on the date of the text that references the Insurance Policy.

Page had been a CIA asset actively helping get intel on Russia. The investigation made use of his Russian connections, while deliberately concealing his role with the CIA, to establish the basis for pointing an accusing finger at him… and they manipulated email evidence against him to achieve that.

Bongino covered it in yesterday’s show, and we’ll let him describe it in his own words, with the show cued up to the relevant section.

What OTHER things happened around that same date, according to the IG report?

On the very same day, we see that ‘Crossfire Hurricane’ had been looking for a FISA warrant into two Trump team members. They wanted to submit a FISA for Papadopoulos, but had abandoned that application. They sought assistance from the FBI’s Office of General Counsel, the (OI) and (NSD) but fell short of the needed requirements to establish Probable Cause on Carter Page.

At what point did Comey come into play and get his very first formal briefing? It was the very same day, imagine that!

The FFG (friendly foreign government) is Australia’s Alexander Downer, whose allegation against George Papadopoulos played a critical role in moving the investigation forward, in particular hinging on the use of the word ‘us’. 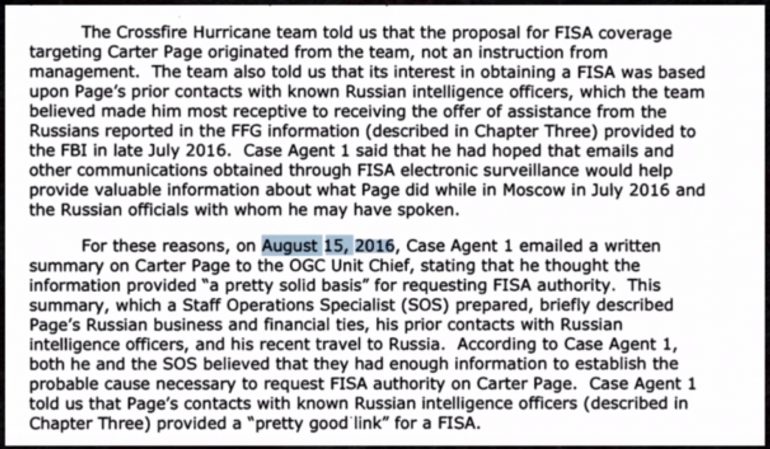 It really was no mystery who Page was meeting in Moscow — he was a CIA asset.

But they buried that inconvenient fact while using sketchy allegations to suggest that Carter Page wasn’t spying FOR U.S. interests but was ‘the most receptive’ to BETRAY U.S. interest to the Russians. His own contacts — which had been benefiting U.S. intelligence — were used as a pretext against him… and as an insurance policy to secure action against the future President.