Federal Elections officials will most likely object, but should they be approved?

Lawmakers in Oklahoma have submitted a specialty licence plate proposal, the proceeds from which would go to benefit veterans.

State Sens. Nathan Dahm and Marty Quinn want the plates to benefit veteran groups Warriors for Freedom Foundation and the Folds of Honor Foundation, but experts warned that they might violate Federal Election Commission rules.

“These are political slogans,” Richard Briffault, a professor at Columbia Law School, told The Washington Post. “This has the look and feel of using state resources to support a political candidate, which seems improper . . . and possibly illegal.”

The Senate Bill 1384 would allow Trump, or an entity designated by him, a say in the plate designs. Meanwhile, Dahm posted a mockup of the proposed plates featuring the silhouette of a saluting uniformed officer.
Source: NYPost 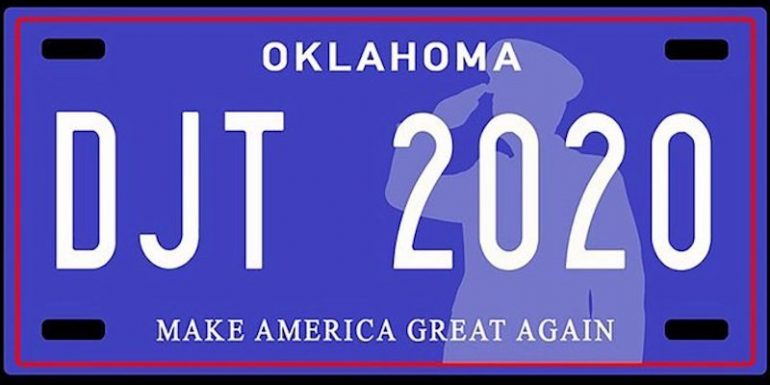 The bill also leaves room for ‘to any person wishing to demonstrate support for the proclamation made by Donald J. Trump’ to apply for these plates.

If approved, these specialty plates could be authorized and available by November 1st — just before the next election.

Should they 'OK' the MAGA-themed licence plate?